What happens when you take nine Tata UVs including Hexa and Harrier and put them on the road to the world’s highest motorable road? Come, witness, how this epic journey unfolded over a course of 10 days. 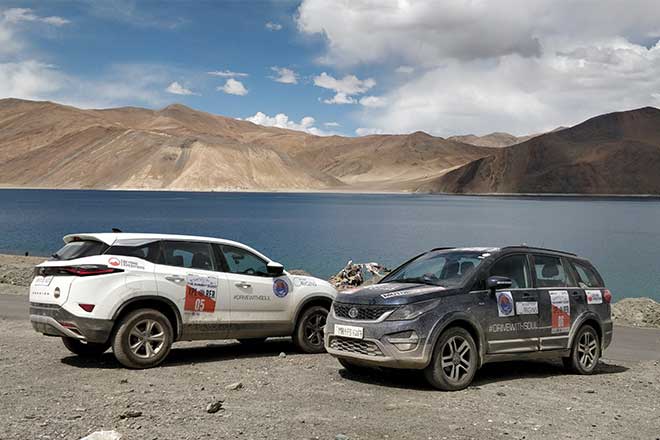 There is an epic journey that describes each and every one of us. For the explorers who took on the Summit Quest from June 25-July 6, this was the moment. A drive curated for adventure, off-roading, and high altitudes, had the necessary DNA required to define what it means to go on a brilliant road trip. For most of the participants who signed up, it was their first foray into the upper Himalayas, and for all of them, it was the very first time they would go on a convoy drive. This experience was designed to be a true test of vehicle, grit, performance and endurance. Setting off from Chandigarh, on the morning of June 26, the participants had been briefed that they were in for a ride of their lives. The convoy of 7 Tata Hexa’s and 2 Tata Harrier’s, powered their way up the hills towards Simla and on to Narkanda. Day one was just a flavour of what was to come. 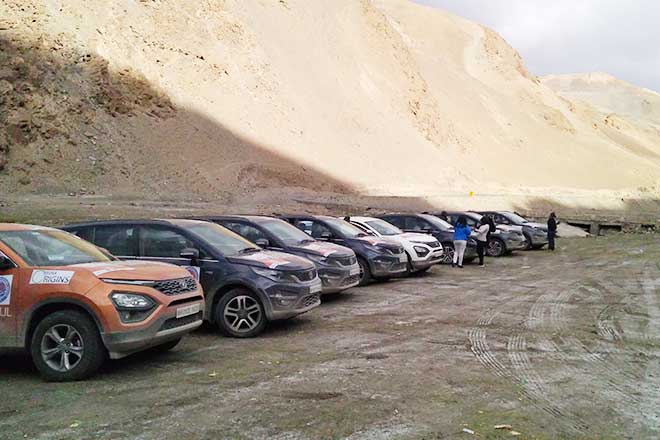 This was the time to get comfortable with the vehicles and get used to driving in a convoy. As the convoy battled through the heavy traffic of vacationers up to Simla, the Lead, driven by Kanishk Malick of Beyond Expeditions, had a challenging task of getting the SOUL fleet all the way up to Narkanda. It was here that the convoy came truly alive. Before turning in for the evening, it was time to make a climb up to the Hatu Mata Peak at 10800 feet and get a good look at the grandeur of the Himalayas for the very first time. 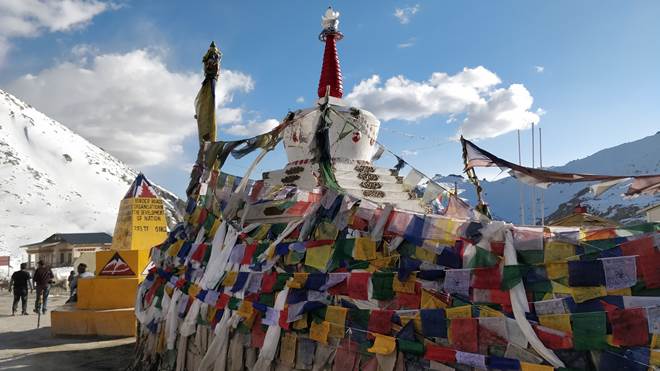 The first evening was a true revelation. All the explorers gathered around a bonfire, exchanging stories that would only become more poignant as the days went on. Day one had been challenging and fun, and the convoy had settled into a rhythm. Kanishk Malick and Nikhil Pratap Singh in the lead vehicle, and Guramrita Oberoi in the Sweep vehicle had their task cut out for themselves over the next 11 days of driving; however if Day 1 was anything to go by, this would be a fun convoy to take on the expedition. 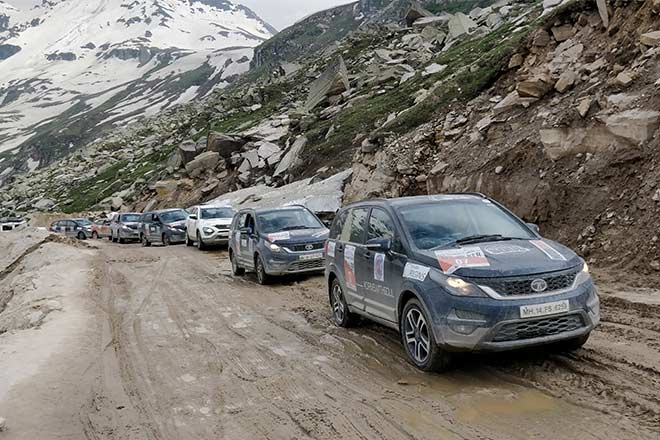 What are the rules of a convoy drive? This is a question worth answering as it is at the very heart of an expedition like the Summit Quest. Lead is the first vehicle in the convoy. Lead sets the pace, ensures safety, keeps a tab on all the convoy vehicles and ensures that we get to our daily destination on time. The Sweep vehicle, on the other hand, is the last vehicle in the convoy. Makes sure that all the vehicles are in front at all times, and in case of any unplanned stoppage (bio-break, etc.) stays behind with the vehicle that has stopped. No vehicle gets to drop behind Sweep. Coordination between the two is paramount to safety! For a nine vehicle fleet, we had a Float vehicle as well. The Float, as the name suggests is another management vehicle and can be placed anywhere within the fleet, and depending on the situation can be ahead of Lead or behind Sweep if absolutely required. The Float vehicle carries the doctor as well! 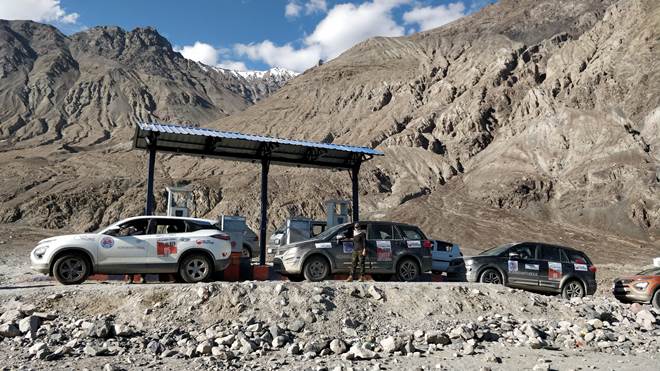 Once we reached Narkanda, with the convoy in good spirits, it was time to bring the challenge on. The next 11 days would take the convoy over 8 high altitude passes. The first to come would be the Jalori Pass between Narkanda and Kullu. Getting over this pass, the fleet got a glimpse of the snow-capped peaks in the distance for the very first time. There would be plenty of snow to come, but not quite yet. Steep gradients, both ascending and descending challenged the drivers, vehicles and endurance. It was a long day of driving and the Tata SOUL fleet performed effortlessly. The one comment that we got to hear from all the convoy members, at the end of a 14 hour day of driving, was about the sheer comfort of driving the Hexa’s and Harrier’s. The participants were already falling a little in love with the vehicles they were driving. 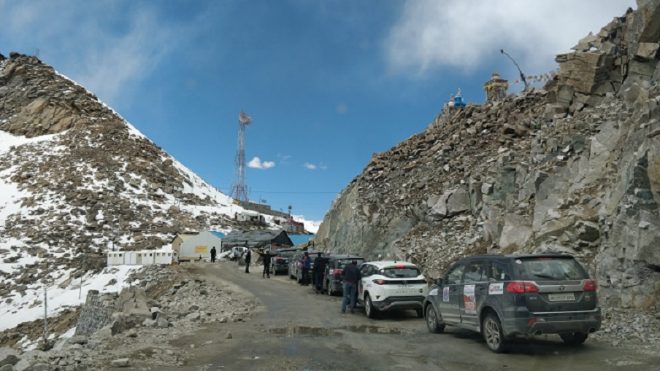 After a day of rest and recuperation in Manali; a quick walk around the old town, and a few adventure sports; it was time to take on the upper Himalayas. With a 4 am a departure from Manali, the task was to get over the second pass of the drive – Rohtang. At an altitude of 13000+ feet, the convoy would finally get up and above the treeline for the first time and remain there for the next 9 days! It was a day to take everyone’s breath away! Snow, slush, and broken roads demanded the use of the Rough Road Mode in the Tata Hexa and Harriers, and it was brilliant to see another key facet of vehicle technology come alive. The participants were truly thankful and amazed at the same time. The chunky tyres and grunt of the diesel under the hood made short work of all the terrain that the Himalayas could throw at the SOUL fleet. With a short lunch stop at Sissu, catered by traditional Himachali cuisine, the participants were well satiated and made quick work of getting to Jispa for an evening of unwinding. The evening brief would bring news of a lot of highlights during the next drive day. 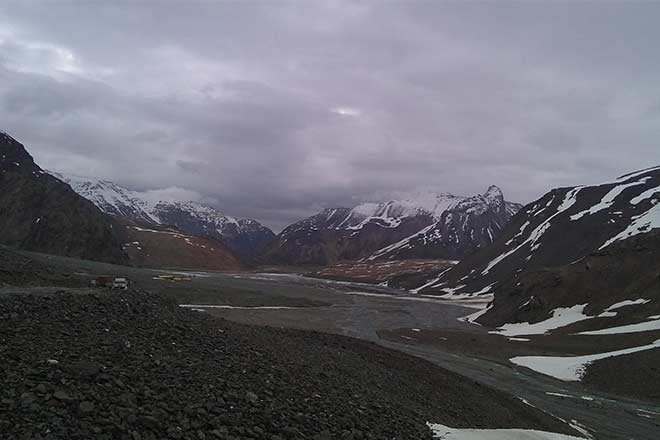 Over the next day, the convoy would go over four high altitude passes. The first was Baralacha La. Covered in fresh snowfall, it was the perfect environment for an impromptu snowball fight. Each one for themselves – it was a battle for supremacy in snowball artillery at an altitude of 16000+ feet. After an engaging 15 minutes, the breathless warriors were ready to hop back in their vehicles and share their hits and misses over the walky-talkies in the vehicles. Let me tell you, there were scores to be settled before the drive was over. Every time we chanced upon snow after Baralacha La, the snowball fight resumed! 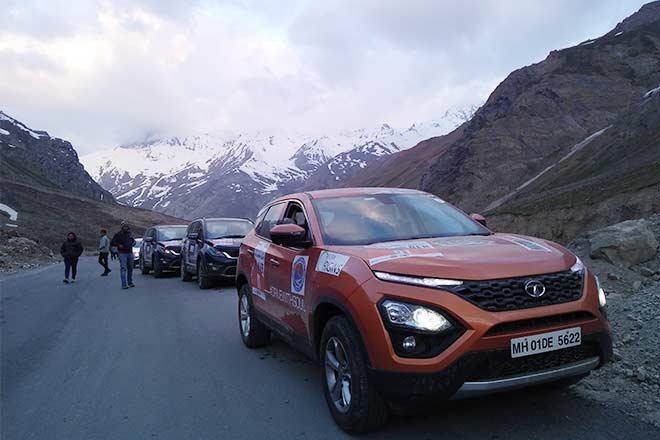 The other passes for the day were Nakee La, Lachung La, and Taglang La; all ranging between 15800 feet to 17300 feet. This was a day to experience the challenges of AMS; the pure joy of Maggi noodles and hot ginger tea, and really revel in the camaraderie that a drive like this brings around. For some, it will be the high altitude passes, for others it will be the Maggi noodles at Pang, for others it will be the snowball fights; however in 4 days we already had a ton of memories and photographs to share. Getting into Leh by nightfall was the culmination of a challenging day of driving and seeing some of the most impressive sights that they Himalayas have to offer. 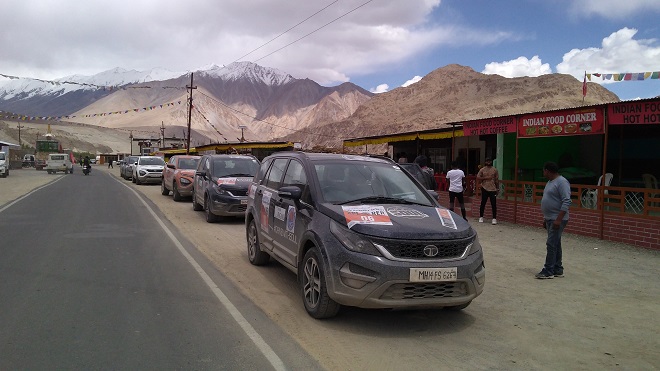 From Leh, the convoy ascended the mighty Khardung La at close to 18000 feet, before heading on to the Nubra Valley, to stargaze under the 100 foot tall Maitreya Buddha statue at the Diskit Monastery. White sand dunes, the unbelievable sight of Bactrian camels, and a night of music at the Desert Himalayan camps was the perfect way to hit the mid-point in a 12-day long adventure. Everyone was mesmerized, enthralled and maybe even a little speechless. So much to see and we were only half done. 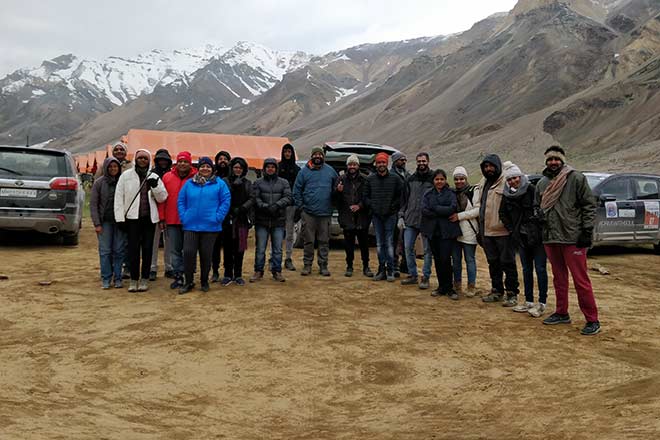 One the return route to Leh, Lead directed the convoy through the inimitable Shyok valley, on past Durbuk and on to the banks of the Pangong Tso. Sitting on the border of India and China, this high altitude lake is a mecca of adventurers. To dip your hands in the pristine blue waters, and photograph what may be the last frontier of India is a surreal experience. The moonscape like mountains with crystal blue waters at the base makes for photographs that do not need to be edited. Each color brings with it a vibrant hue, that cannot be captured anywhere else! After taking in the ethereal beauty of the Pangong Tso, it was time to cross the last of the eight passes – Chang La. At an altitude of 17500+ feet, the drive was challenging; snowmelt had broken the roads, the ascent was steep, the evening was drawing near and there was a chance of snowfall in the air. The perfect backdrop to what had been an amazing drive so far. Sipping a cup of coffee at the summit in the army canteen was in some ways a culmination of what the Summit Quest was all about. 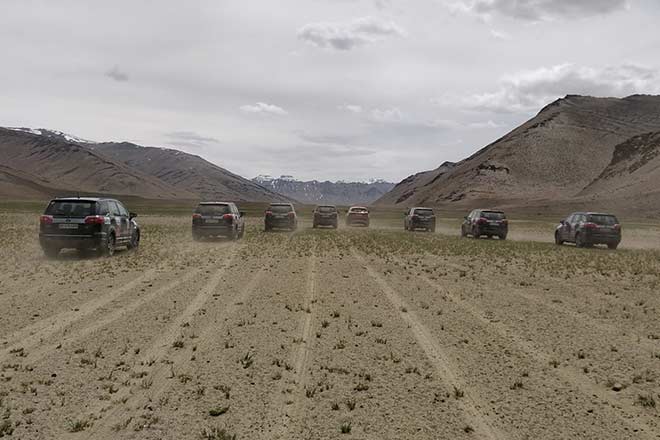 Adventurers have dreams; to do something special, to create memories, to capture photographs and re-live an experience. The Summit Quest was an amalgamation of all of those dreams. Each moment was special, each photograph was captured to tell a story or capture an emotion. Each day was a showreel of highlights and maybe going up there once will never be enough for any of the people on this drive. Thank you Lead, Convoy and Sweep. This one was definitely special!