Royal Enfield has ventured into the scrambler segment with the new Scram 411. Starting at Rs 2.03 lakh, ex-showroom, will it meet the needs of city life and tackle dirt tracks? We find out. 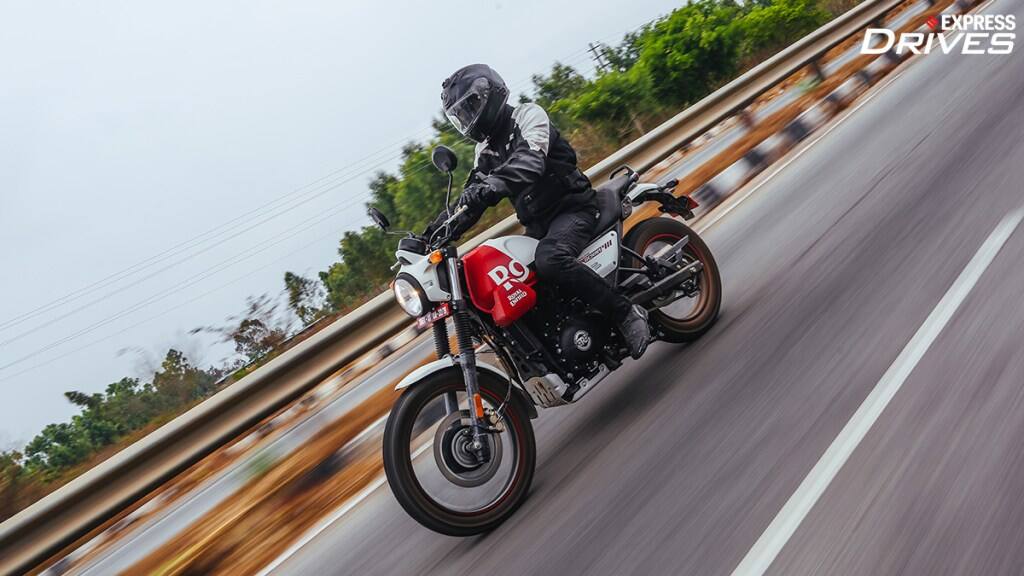 Ever since Royal Enfield launched the Himalayan in 2016, it’s grown from strength to strength. The two-wheeler company has consistently been chipping away its rough edges and as a result, the affordable adventure bike today has a cult following. Royal Enfield takes its customer feedback very seriously and after receiving requests for a multi-purpose motorcycle, the company has decided to add another edition to the Himalayan family, the Scram 411.

The scrambler will retain the Himalayan’s strengths like its rugged and off-roading capabilities but it will also feel right at home in urban conditions. The Scram 411 will be the second scrambler in this segment after the Yezdi Scrambler. We have all read the leaked reports and seen the spy videos of the Scram 411, but now we get to swing our leg over this new scrambler and experience its capabilities.

Simplicity at its best: Design

The Scram 411 is not your run of the mill Himalayan that gets cosmetic changes. Royal Enfield has introduced some design and other important tweaks to ensure that the scrambler is an adaptable and versatile bike. The first thing that will grab your attention is the clean design without overkilling the styling. This is a smart move as it will attract prospective buyers from all walks of life. Gone is the windscreen that we are used to seeing on the Himalayan and in its place is the retro round headlamp with a distinctive metal cowl around it. Even though we weren’t really surprised that it houses a halogen light, it wouldn’t be a bad thing for Royal Enfield to opt for the services of an LED beam. With the tail lamps being LEDs and a shorter rear fender in typical scrambler fashion, the major change here is the height reduction of the grab rail to ensure the rear saddle is more accessible for pillion riders.

Moving further down to the tyres and here’s where real changes can be seen. The front tyre is 19-inch, unlike the Himalayan’s 21-inch, to make it more tarmac and trail-friendly, while it retains the 17-inch rear wheel. Though the Scram is equipped with the same 41mm front telescopic forks, the travel is 190mm, as expected slightly less than the Himalayan’s 200mm travel. As the rear mono-shock is identical to its ADV sibling, the wheel travel remains at 180mm. The Scram 411 also gets the same dual-purpose Ceat Gripp XL tyres as the Himalayan, which offers decent traction and grip on different terrains. Due to the downsizing of the wheel, the ground clearance is 200mm, 20mm less than the Himalayan, but, in real-world conditions, it’s still more than adequate to tackle the urban jungle and lord over dust or gravel tracks with ease. Coming to the braking system, it’s the same as the Himalayan as the front wheel gets a single 300mm disc brake while the 240mm disc continues to soldier on in the rear. The Scram 411 is equipped with a dual-channel ABS system but unlike the Himalayan, the rear wheel ABS cannot be deactivated. Royal Enfield believes that the scrambler riders will not be tackling hardcore terrains like the Himalayan, therefore, this function will not be missed.

Moving on to the instrument cluster, the Scram comes standard with a single multi-functional speedometer that reads out the odometer, two trip meters, a gear indicator and a digital fuel gauge. Royal Enfield hasn’t forgotten about their loyal wanderlusts, who can opt for the Tripper turn-by-turn navigation as an accessory. Based on Google Maps, this additional display pod, which made its debut on the Meteor, is very easy to use and is accurate as well. The Tripper will not even come standard on the top variants.

When it comes to motorcycles, the tank is an integral part of the design and even though the shape remains more or less the same, it sports additional panels or extensions below that feature Royal Enfield branding. The capacity of the tank remains the same at 15-litres. The Scram gets a brand-new single saddle, unlike the Himalayan’s split seat. At 795mm, the seat height is 5mm lower than the Himalayan, making it more accessible for riders.  How comfortable is it? We will get into that a bit later.

The Himalayan’s kryptonite has always been its weighty issue. Weighing 190 kgs, there is no getting away from its extra heft, especially at slow speeds. Royal Enfield kept a close on this and the Scram 411is roughly 6.5 kgs lighter at 183.5 kgs thanks to the omission of the tubular frame on the tank, big instrument cluster, windscreen and the centre stand, which weighs 1.5 kgs, is optional.

Heart of the matter: Engine

As the Scram 411 comes based on the Himalayan, there are no prizes in guessing that it is also powered by the same 411cc single-cylinder oil-and-air cooled engine. Royal Enfield hasn’t changed with the power output as a result it churns out 24.3bhp and 32Nm of torque. It also retains the same 5-speed transmission with a tall gearing ratio, which is something Royal Enfield didn’t want to tinker around with as it would have affected the bike’s off-roading capabilities. We managed to ride the Scram in the city, on the highway and on dirt tracks. The engine is a refined unit and cruises comfortably over the three-figure mark.

The motorcycle remains smooth and relaxed till the 110-115 kmph region, but once it crosses the 120 kmph mark, the power tends to taper off. Keeping our real-world conditions in mind, these figures are impressive. At slow-moving traffic, the Scram doesn’t disappoint either as it offers plenty of grunt in a controlled fashion. Could Royal Enfield have shortened the ratio of the first two gears? It would have certainly brought in some urgency to the powertrain as it feels flat below 1,800-2,000rpm, but then that would force the rider to change gears frequently in bumper-to-bumper traffic conditions. The power may not come rushing in at the low-end speed, but this is where the torque plays a huge role as it kicks in early enough to negate the power surge. The mid-range power band is where you get the optimal power of the engine as it feels more at ease and peppy.
As mentioned earlier, we also got the opportunity to take the Scram onto deeply rutted dirt and gravel tracks and it came out in flying colours. Not only did it manage to neutralize the terrain, but it remained poised and in full control. Yes, at times the rear would lose grip as expected in such trails, but the Scram would let you steer it effortlessly with measured throttle response and some support of the left foot on the ground.

Being a more street biased motorcycle, the Scram’s handlebars are lower by 60mm and pushed closer to the rider by 20mm making the stance ideal for both urban and off-roading conditions. With a neutral riding posture, this makes it easy to even stand on the footpegs and steer the stead without any hiccups. For tall riders, over 6 feet in height, they will have to slough a bit. The new saddle is quite supportive and is accommodating for city commutes, but if you cover long distances regularly then the seat could have been firmer as you tend to sink into it. Like all Royal Enfield motorcycles, the Scram too comes with a vast range of accessories, so one can opt for a touring seat via MiY (make it yours) personalization option. Based on the solid built Himalayan chassis, the Scram can take on a lot of punishment and it manages to cushion ditches and even deep potholes. Though its suspension isn’t as softly sprung as the Himalayan, the bike carpets the thud, but you do realize the conditions of the turf.

Brakes are one department where Royal Enfield needs to tweak it further as they feel vague and the initial bite is soft. In case of an emergency, the spongy and delayed feedback doesn’t enthuse a lot of confidence, hence the front brake lever needs to be yanked hard.

The Himalayan is already a popular motorcycle and with the Scram 411 being more road-biased, it will only attract more takers. It has managed to retain the ADV’s strengths with better handling capabilities thanks to the tweaked suspension set-up and being lighter in weight. The bike is agile and allows you to weave through traffic and manoeuvre on broken challenging terrains effortlessly. The engine remains refined and one can only feel vibrations at over 7,000rpm, making it predominantly a smooth experience. With equipment like the Tripper navigation system and centre stand as an accessory, the Scram 411 has been priced aggressively starting from Rs 2.03 lakh to Rs 2.09 lakh, ex-showroom, and knowing the sort of cult following Royal Enfield enjoys, they could have another winner in their hands.