In protest of Helmet laws Pune people hold a funeral for Helmets, wear pots on their heads and threaten to wear pagdis. Here’s why you should steer clear of this anti-helmet brigade! 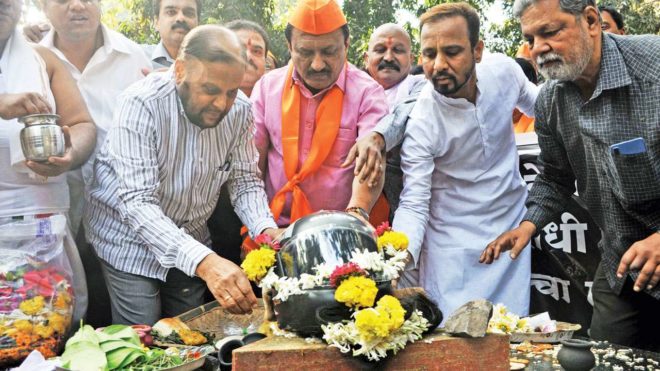 Disclaimer: We request you to not fall off your chair laughing after reading this. Pune is one of the fastest growing cities in the country and is one of the largest hubs for two-wheelers in India. However, in the mix of a large young two-wheeler using population and misdirected political agendas Pune has come front and centre in the public eye for leading the charge against the mandatory helmet laws in the country. That is correct, it read AGAINST mandatory helmet laws in the country. The misguided crusade against the head saving device began in Mumbai’s satellite city late last year after the Pune Police declared that they would start enforcing the helmet law for two-wheeler users. This triggered a citywide protest, regardless of which the Pune Police has continued their plans to fine motorists that were found not adhering to the rule with more than 9,500 fines handed out in the last two weeks.

In retaliation, a group called the group ‘Helmet Sakti Virodhi Kruti Samiti’ (Yes, someone had the conviction to create such a group!) was formed to fight the ruling, conducting an elaborate theatrical funeral ceremony of a helmet a crematorium to protest against the new ruling.  The strange re-enactment of last rites was held 10 days after the Police started enforcing the law,  with Shiv Sena Leader Mahadev Babai at the forefront of the protest. According to Babai, the entire mandate by the police was a fiasco. Babai was quoted on multiple platforms as saying that while the safety of the population was a top priority it was important for the police to consider local public sentiment. He reiterated saying that the majority of people ride slowly on local roads negating the chances of accidents, and the need for helmet laws. He also reportedly told HT that the use of Helmets perpetuated hair loss and spine problems for those using them.

In the interest of our readers, we feel the need to clarify that while hair loss can be attributed indirectly to long periods inside a lid (although a Balaclava can fix this), there is NO medical evidence that suggests that helmets cause spinal problems.

This newly formed committee said that it was okay to mandate the use of helmets on the highway because the majority of two-wheeler usage within city limits could not exceed 20-30kmph. However, truly outrageous in all this is the fact that many of those leading the protest claim that they will even resort to wearing turbans to avoid wearing helmets, as Sikhs are exempted from wearing helmets in India. One particular advocate even wore a cooking pan on his head to protest the laws claiming that his pan was just as useful as any helmet available on the market.

Having had our share of laughter at the activities of this group, Express Drives hopes that its readers understand the importance of the helmets and that even at 20-30 kmph, a 100 kg scooter with a 70 kg human on board has more than enough momentum to cause serious head injuries and brain damage. Hitting a stone or a footpath at just 30 kmph can even result in instant death if no helmet is worn. We advise all our readers to wear at least a helmet at all times on motorcycles. It’d be better to wear full protective gear though to ensure better safety for yourself