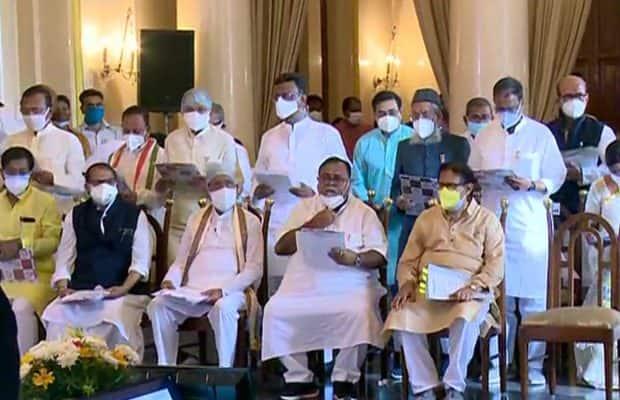 TMC Cabinet List: A prominent name among them is Amit Mitra, who was the finance minister under Banerjee in her two previous terms since 2011.

West Bengal Minister List 2021: West Bengal Chief Minister Mamata Banerjee has inducted 43 ministers in her new cabinet which also includes several fresh faces. As many as 43 ministers, including 19 ministers of state, took oath today at Raj Bhavan in Kolkata. A prominent name among them is Amit Mitra, who was the finance minister under Mamata Banerjee in her two previous terms since 2011, but did not contest polls due to his ill health. Just like Mamata Banerjee, Amit Mitra will also have to contest a by-poll to get elected to the West Bengal assembly.

The West Bengal Assembly Polls were held for 292 seats and two seats, for which election was cancelled, will go to by-polls. There are 294 seats in the Bengal assembly.

More Stories on
west bengal assembly elections
Next Story
Naya Bharat — where we make virtue out of sympathy earned by failures: Shashi Tharoor’s swipe at govt