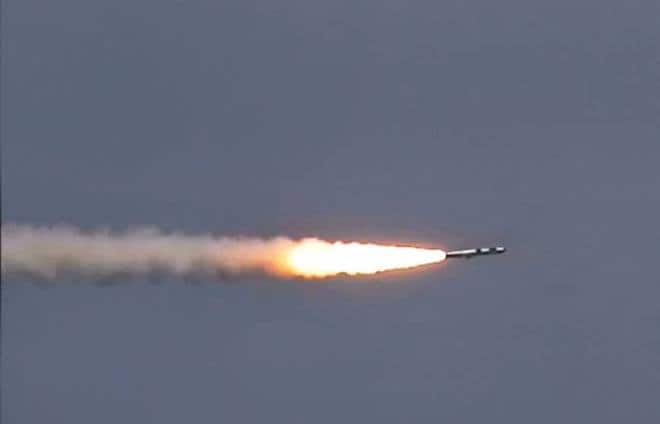 BrahMos is one of the heaviest missiles in the world to be integrated on a frontline fighter jet and with today's success, the IAF gets unprecedented fire power against the enemy.

BrahMos test fired from Sukhoi 30-MKI! In a first for India, and the world, the Indo-Russian supersonic cruise missile BrahMos was today successfully test fired from IAF’s Sukhoi 30-MKI. BrahMos is one of the heaviest missiles in the world to be integrated on a frontline fighter jet and with today’s success, the IAF gets unprecedented fire power against the enemy. “The missile was gravity dropped from the Su-30 from fuselage, and the two stage missile’s engine fired up and straightway propelled towards the intended target at the sea in Bay of Bengal,” said a Ministry of Defence release.

BrahMos, said to the world’s fastest anti-ship cruise missile, was integrated on the Sukhoi-30 MKI by HAL. With a range of 290-km, the 2.8 mach missile is a lethal weapon, and its integration with an aircraft like Sukhoi is without a doubt a big boost for India’s defence preparedness and strike capabilities. Defence Minister Nirmala Sitharaman called this a world record. “India creates a world record and completes Supersonic Cruise Missile Triad by successfully testing #BRAHMOS #ALCM from Indian Air Force Sukhoi-30MKI fighter aircraft. Smt @nsitharaman congratulates Team Brahmos & @DRDO_India for this historic achievement,” the Defence Minister’s handle tweeted. BrahMos Aerospace CEO, Dr Sudhir Mishra, thanked the Defence Minister and reiterated his commitment and dedication to serving the nation with more technological achievement and advancement in missile technology. Watch video! BrahMos missile test-fired from Sukhoi-30 MKI fighter jet

In 2016, a Sukhoi 30-MKI frontline fighter jet was test-flown with the BrahMos missile integrated on it. According to BrahMos Aerospace, the Su-30-BrahMos combination will carry out air combat operations within and beyond visibility range and will provide the IAF with the capability of attacking targets protected by powerful air defence assets. This means that BrahMos together with the Su-30 MKI would give India a formidable weapon against Pakistan.

BrahMos has already been inducted by the Indian Army and Indian Navy.. It can be launched in either inclined or vertical configuration based on the type of the ship. The land-attack version of BrahMos is fitted on an mobile autonomous launcher. BrahMos is also capable of being launched from submarine from a depth of 40-50 metres. Several countries have already expressed interest in buying the BrahMos missile from India.

Incidentally, with India becoming a member of the MTCR, India and Russia decided to enhance the range of the BrahMos missile in 2016. In March this year, a 450-km land-based version of the BrahMos missile was successfully test fired. Meanwhile, the development of an almost 800-km range BrahMos missile is underway and is expected to be complete in two years time. The 800-km version will give China every reason to be wary of India’s strike capabilities.