The Triumph Street Triple R will mostly be the only sports bike you will ever need. Except for perhaps when you have to go grocery shopping or carry a pillion. 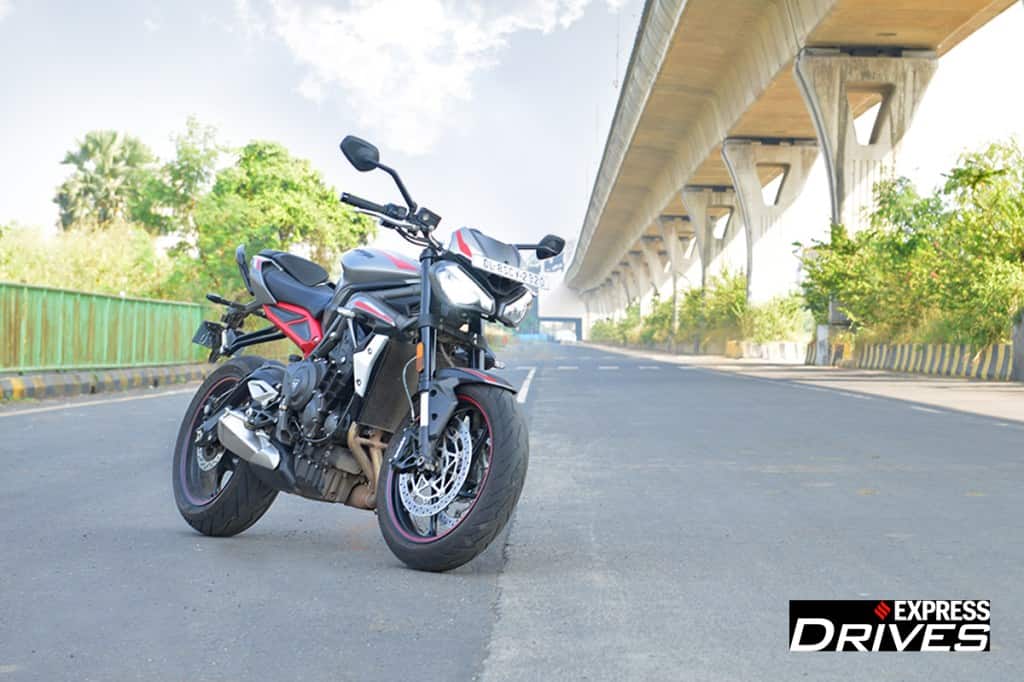 I vividly remember the first time I rode a middleweight street naked. It happened to be the Kawasaki Z800. It felt so sublime and smooth that within 20 minutes, I forgot that I was riding a superbike. However, when it was time to make a u-turn, I was quickly reminded of how heavy the bike was. Cut to a year later and I was on the new Triumph Street Triple S. The bike felt as easy as the Kawasaki to ride but was much easier during u-turns or even while tip-toeing in traffic. This is what made me fall in love with the Street Triple. It is so easy to ride for even someone who has just come off a 150cc machine. Cut to 2019, and I have had the fortune of having a Street Triple RS at my disposal courtesy a dear friend who purchased the bike. This made me want to own a used RS someday. My dreams might end with a new bike that makes exactly the same power as the RS, uses the same engine, is priced way lower and also has a common family name. Ladies and gentlemen, welcome to the new Triumph Street Triple R road test.

Ohh well, for the model year 2020, the Street Triple R still uses an immediately recognisable “praying mantis” design theme. The headlamps are all-LEDs and also have DRLs. Triumph India didn’t bring the “base” Street Triple S this time and instead focussed on the mid-spec R. There are very few things that separate the R and RS. This includes the instrument console, brakes and suspension. If I focus on the R for now, I can tell you that the instrument console is more or less similar to that of the Striple S that I rode a few years ago. There are also now highly adjustable mirrors placed in the conventional position and not bar-end ones like on the RS. The exhaust canister as well as the tail lights too have been slightly changed. 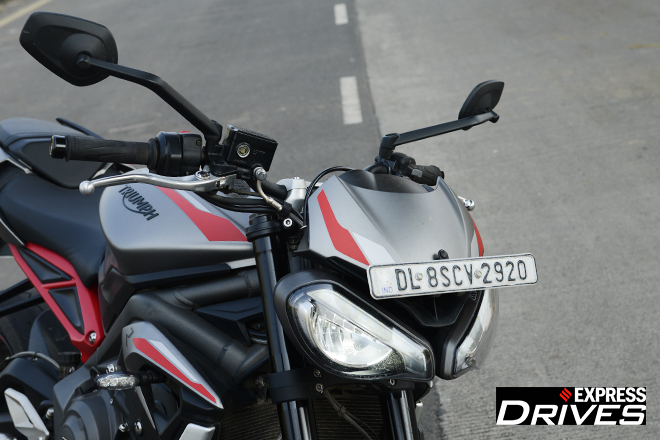 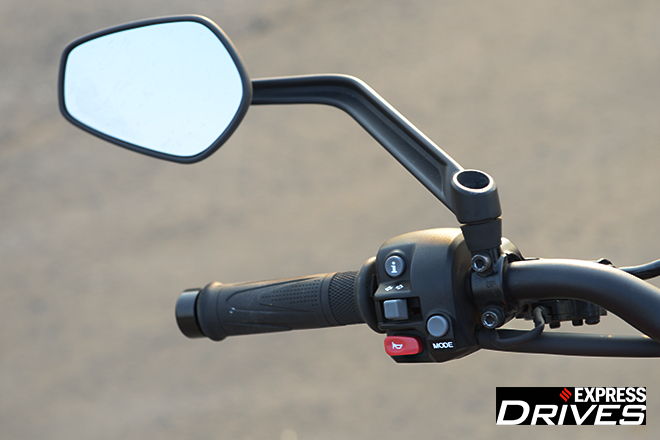 In terms of features, one can see that there is an “i” button on the left side of the handlebar as well as a mode switch. Using this, one can toggle between the riding modes, average speed, fuel efficiency and other parameters. Speaking of riding modes, there are four – Rain, Sport, Urban and Rider. These alter the way the power is delivered though honestly, only the Rain mode is noticeable as it delivers power in a bit laidback fashion. One thing about the instrument console is that with two bars displayed on the instrument console, the low-fuel light comes on. Moreover, if you fill fuel, the bars don’t increase immediately. Ride the bike for five minutes and you see the bars climbing. This is mostly the case with the Street Triple range as I have observed this in the RS as well. 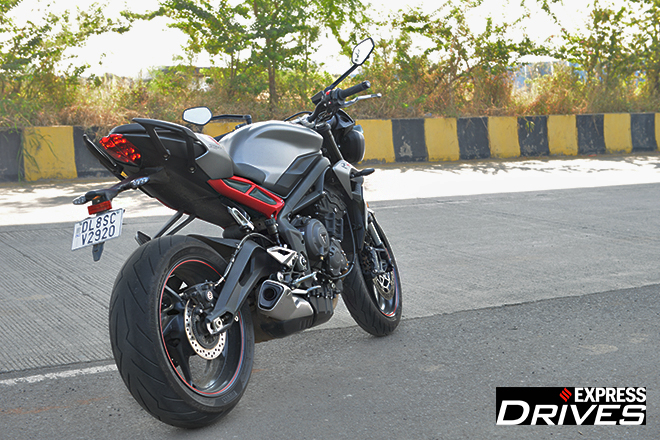 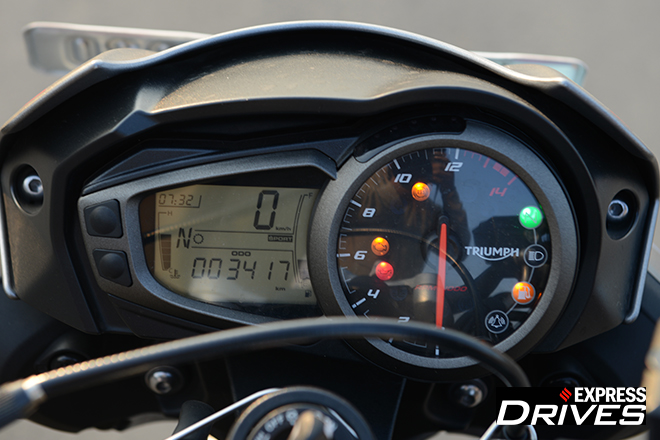 Even in harsh sunlight, the LCD screen is pretty much readable. I though don’t particularly like the way the clutch cable passes over the console and one has to lean forward a bit to read the latter. 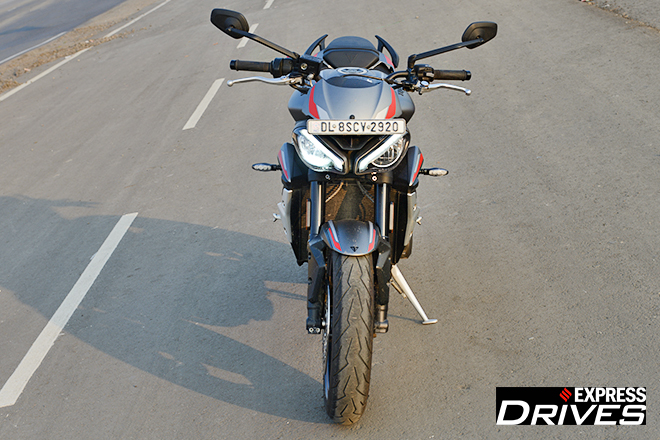 The Street Triple R uses a BS6, 765cc, three-cylinder 118hp/79Nm engine. This engine is shared with the RS but it makes a potent 5hp more in the latter. This engine in the R is paired to a 6-speed gearbox that comes with a bi-directional quickshifter. The latter works like a charm and is very much useful for those clutchless upshifts or downshifts above a certain road speed. The gearbox itself is nice to use. Thumb the starter and the revs climb to 2,500rpm before settling into an idle 1,200rpm. There is nothing lost from the ease of riding from the S and I immediately felt at home. Efficiency-wise, the R returned a combined mileage of 24kmpl. 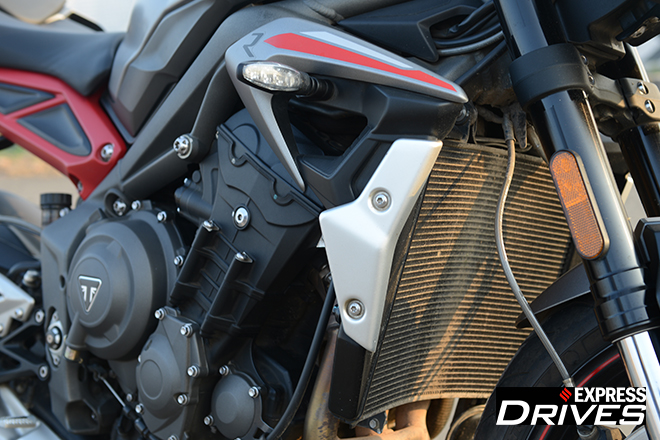 The zing though was missing, something which you can ascertain after riding the older RS back to back. Even a KTM 790 Duke feels a tad urgent. Make no mistake. The Triumph Street Triple R is no slouch and it can blur the landscape quickly. However, when you twist the throttle, there is very less push in the seat feeling. With no wind protection on top of the headlight, windblast is something you got to contend with this naked bike. However, it isn’t as bad or tiring as say riding the 790 Duke or even the RS will be. 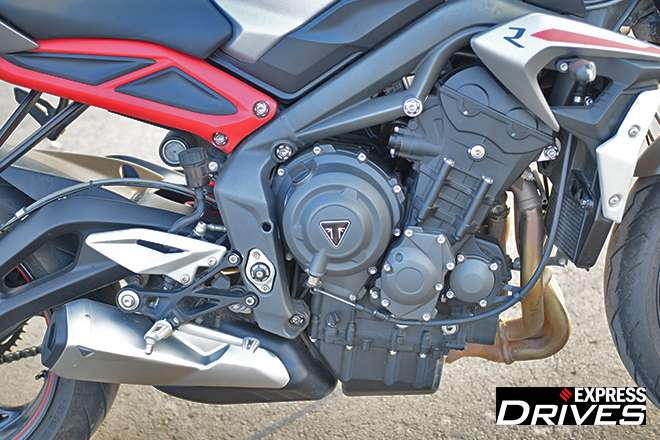 This version of the Street Triple R also feels lights on its feet especially when compared with the older RS. The R is more manageable in traffic. Speaking of which, traffic is where the bike shines. The gearing is spot on for traffic use as you can be in third gear and 20kmph. Twist the throttle and in the same gear, you will be at triple digit speeds. The engine truly shines in the bottom and mid-range with a little oomph left for the top end. If you’re riding the RS, you will realise that your bike has a better top end as well.

Power wheelies, like the RS or even the 790 Duke are quite easy on the Triumph Street Triple R. 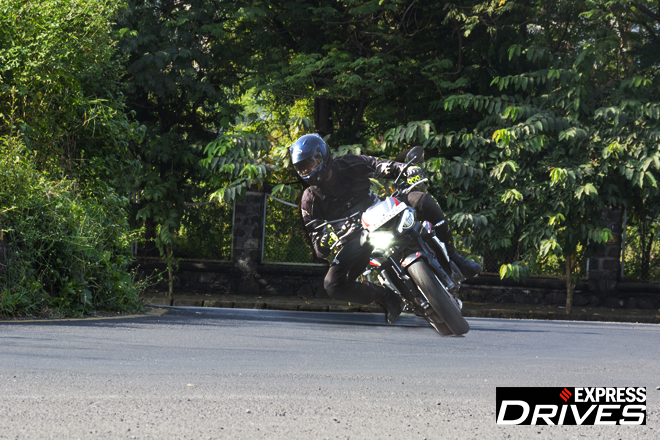 Let’s talk about the suspension first. This bike has got 41mm USD Showa Separate Function Big Piston Forks (SFF-BP) in the front. These are individually responsible for preload and damping. To adjust them according to one’s liking, special tools are required and can mostly be done at Triumph workshops. The rear is again a pre-load adjustable Showa monoshock. Triumph engineers have tuned the suspension to be on the stiffer side. Though, it must be said that it isn’t as bone-jarring or uncomfortable. The suspension absorbs smaller road irregularities but for the bigger stuff, you got to slow down. The Pirelli Diablo Rosso IIIs tyres also do a got job of gripping dry tarmac though I didn’t get the chance to experience it in the wet. 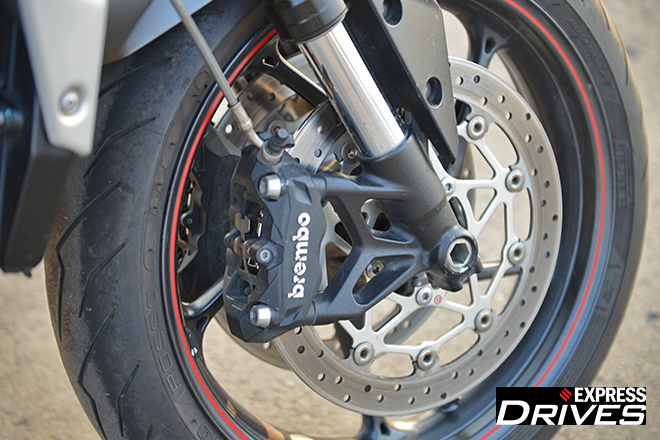 Triumph has specced Brembo brakes on the R and these do a fantastic job of bringing the bike to a halt. There was no brake fade observed even after repeated high speed runs for photography purpose. The feel from the levers too is quite predictable. I have always liked the sweet handling of the Street Triple S and the R just betters it. It is easier to corner and do it fast on this machine. U-turns are easier with no too much weight coming on to the rider. The seat height is 825mm which may be intimidating for a few but a lower version is also available that effectively brings down the perch height to 780mm. 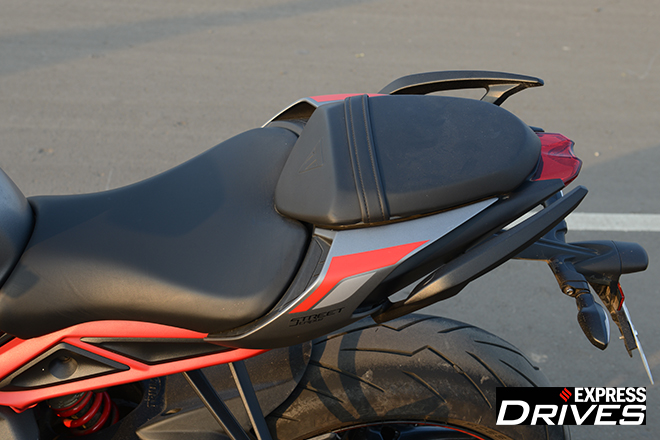 The riding position isn’t as aggressive as the RS and neither does it wear you out after a long hard day in the seat. I cannot comment the same about the pillion as my shotgun refused to sit citing the sparsely-equipped seat. Ground clearance while not specified in the spec sheet is decent and never once did I scrape anything.

In one word, I will sum the bike as “useable”. You see sportsbike or superbikes are built for a purpose. The Triumph Street Triple R takes on that notion, spins it on its head and throws it out. It is so versatile that I can imagine myself doing 50km trips every day in the Mumbai traffic to office on it. Wearing my gamut of riding gear, and throwing on a laptop bag, that is. In fact in one of the images, you will see me wearing one. The cost factor, at Rs 8.84 lakh ex-showroom, if considered is lower than the older S and affordable than the current RS. Sure, the RS brings in a wee bit of excitement to the equation and is equally at home on the road or track, but the R pretty much does all that. It is only the RS’ rawness that the R lacks but will only be a consideration for 10 per cent of the buying populace. 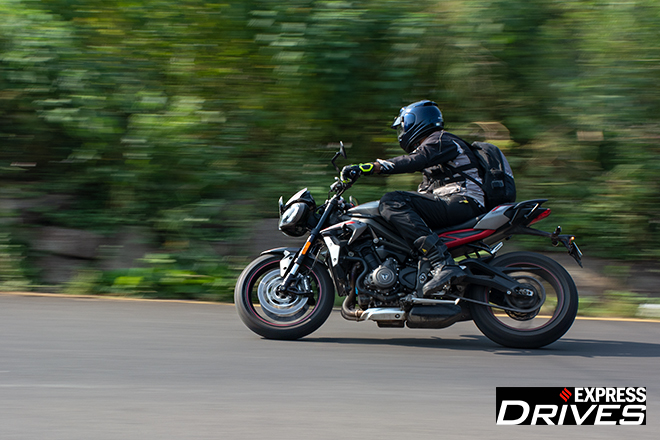 Having seen Triumph’s service and other aspects, I believe there is no other big bike maker in the country that comes this close. It is a no-brainer to ask someone to go in for the Street Triple R (until the GSX-S750 as well as 790 Duke BS6 come in) if they are upgrading from a 150cc, 250cc or 400cc. It is that versatile.