The 5-door Mahindra Thar is likely to be revealed at the 2023 Auto Expo. 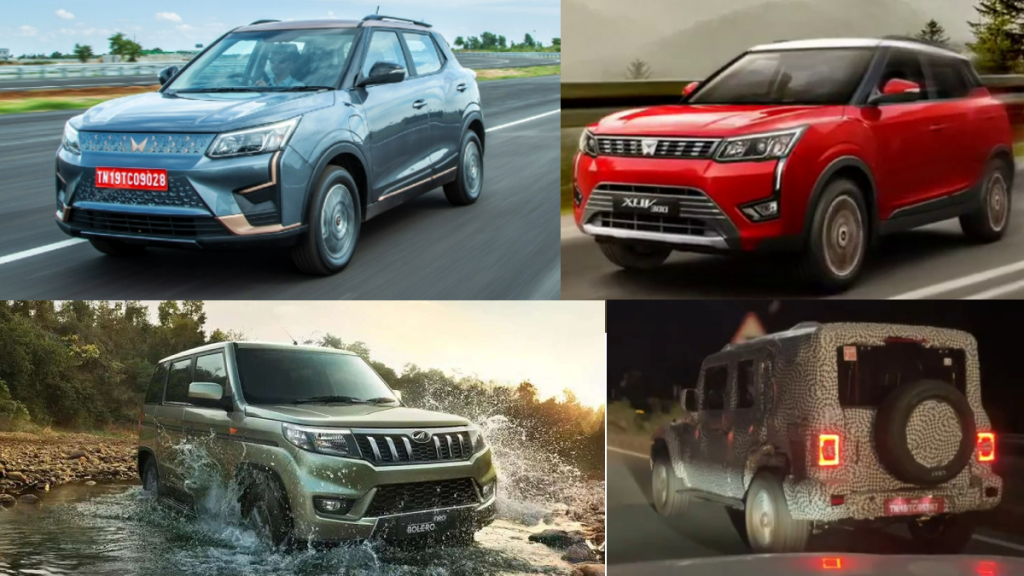 Homegrown automotive manufacturer Mahindra has prepared an SUV and EV onslaught for the Indian market in the next couple of years. Beginning with a 5-door Thar expected to arrive in the Indian market as early as the 2024 Auto Expo, Mahindra will later offer the XUV 400 EV, XUV.e and BE electric SUVs based on their new INGLO EV architecture too. But first, let’s take a look at 4 of the upcoming Mahindra cars in India.

The new 5-door version of the Mahindra Thar has been spied on test quite a few times and rumors are rife that the SUV will launch next year. As per the spy images, the 5-door Thar will have larger wheels, and a beefier front bumper. The off-road SUV might offer some extra cabin space for rear passengers.

The interior of the 5-door Mahindra Thar is likely to remain the same as its 3-door sibling. Even the 2.0-litre mStallion turbo petrol and 2.2-litre mHawk turbo diesel that does duty on the latter will be offered with the 5-door Thar.

The Mahindra Bolero Neo Plus

Mahindra’s well-trusted stallion, the Bolero is expected to arrive during the festive season as the Bolero Neo Plus. It will be powered by a possibly retuned version of the Thar’s 2.2-litre mHawk diesel engine. The SUV is likely to be offered with a choice of both a manual and automatic transmission. As per reports, the Mahindra Bolero Neo Plus will be sold in 7 and 9-seat layouts as well as in an ambulance version with 4 seats and a patient bed.

The Mahindra Bolero Neo Plus price is expected to be around 10-12 lakh, ex-showroom.

The Mahindra XUV400 electric SUV was unveiled last month and will go on sale in India in January 2023. Mahindra has claimed a range of 456 kms on a full charge and a 0-100 kmph sprint in 8.6 seconds. The electric SUV claims a top-speed of 150 kmph and will be offered with 3 charging options including a 50kW DC fast charger that will juice up the SUV upto 80% in 50 minutes. It will be powered by a 39.5kWh battery pack and an electric motor delivering a combined power output of 150 bhp and 310Nm of peak torque.

Bookings for the Mahindra XUV400 electric SUV will begin in the first week of January 2023.

Mahindra is scheduling a mid-life update for the XUV300 subcompact SUV as the model has begun arriving at the dealerships. The facelifted model will feature the brand’s Twin Peaks logo and most of the design, features are likely to remain unchanged. It will continue to be offered with a 1.5-litre diesel engine producing 117bhp and 300 Nm of torque as well as a 1.2-litre turbo petrol engine producing 110bhp and 200 Nm of torque.