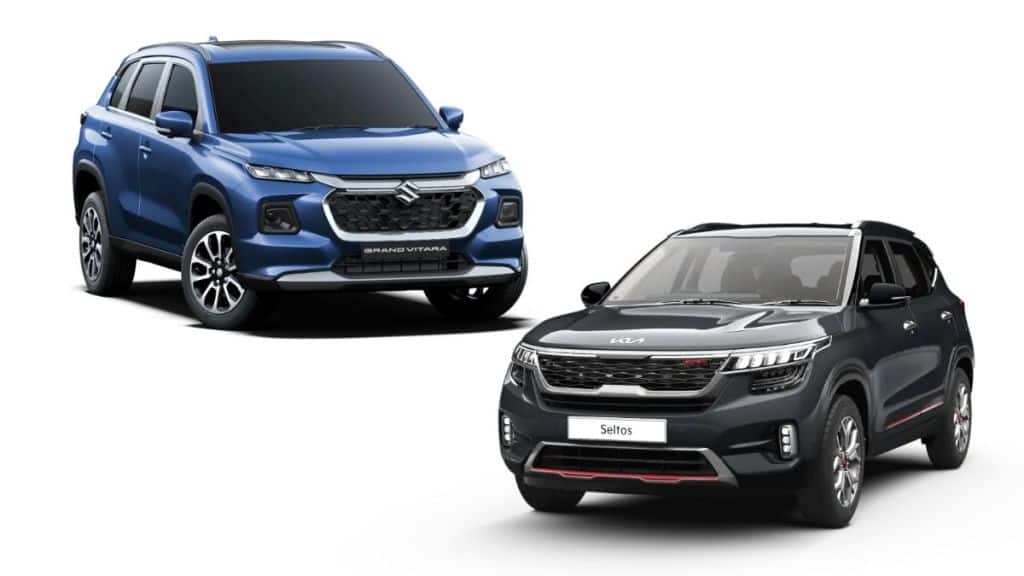 The recently unveiled 2022 Maruti Suzuki Grand Vitara will compete in a highly competitive segment in India. The mid-size SUV segment is led by the Hyundai Creta, and the comparison showed how equally the two match, but in their own ways.

The other popular choice in this segment is the Kia Seltos, the carmaker’s first product offering for India. The Seltos has proven to be a successful product for the carmaker and is offered in variants, making it a strong competitor for the new Grand Vitara. Let’s compare the 2022 Maruti Suzuki Grand Vitara against the Kia Seltos in terms of pricing, features, design, dimensions, and engine specifications to see how they fare.

Maruti Suzuki will announce the pricing for the Grand Vitara in September, just ahead of the festive season. As per leaked pricing details, expect the 2022 Maruti Suzuki Grand Vitara to be priced at Rs 9.5 lakh onwards, ex-showroom. The Kia Seltos is priced between Rs 10.19 lakh and Rs 18.45 lakh ex-showroom.

The Maruti Suzuki Grand Vitara portrays a butch look with a large front grille, squared-off wheel arches, body claddings, and sleek LED DRLs that give it an aggressive look. The Kia Seltos on the other hand features the carmaker’s signature grille, sleek lights all around, and traditional headlights (placed high on the front) that most are used to, all of which give the Kia a sporty stance.

One thing to note is that both SUVs share their underpinnings with other models. The Grand Vitara is built on the global C Platform that underpins the new Toyota Hyryder, while the Seltos is based on the same platform as the Hyundai Creta.

The dimensions show that the Grand Vitara is longer, but the Seltos is wider and has a longer wheelbase, while measuring the same height.

Both vehicles get LED headlights, DRLs, and tail lamps. The Grand Vitara’s rear tail lamp design is refreshing in this segment, while the Seltos’ tail lamps are a familiar sight. Both vehicles feature 17-inch wheels, LED DRLs, and enough uniqueness to identify them at the first glance.

The Maruti Suzuki Grand Vitara’s infotainment system is a 9.0-inch floating unit, while the Seltos gets a larger 10.25-inch one. Also, the Seltos gets an 8-speaker Bose system, which is one of the best in the segment.

The Kia Seltos is offered with a 1.5-litre petrol engine, a 1.5-litre diesel motor, and a 1.4-litre turbocharged petrol unit. In terms of gearbox choices, Kia offers manual, AT, iMT, and DCT options. The engines are the same as what’s offered in the Hyundai Creta. The Kia Seltos offers different drive modes and traction modes, standard across all AT variants.

On paper, the Kia Seltos is more powerful, however, in real-world scenarios, the way the power is managed is what matters. We will speak more on this once the first drive review of the new Grand Vitara is done. However, the Grand Vitara has an ace up its sleeve in the form of AWD, which is offered with the 1.5-litre manual version. This could be a winning factor, as MAruti introduced the All-Grip AWD system owing to customer demands.