India at 75: The automotive sector in the 90s witnessed the launch of many iconic nameplates. So sit back and let’s drive down memory lane. 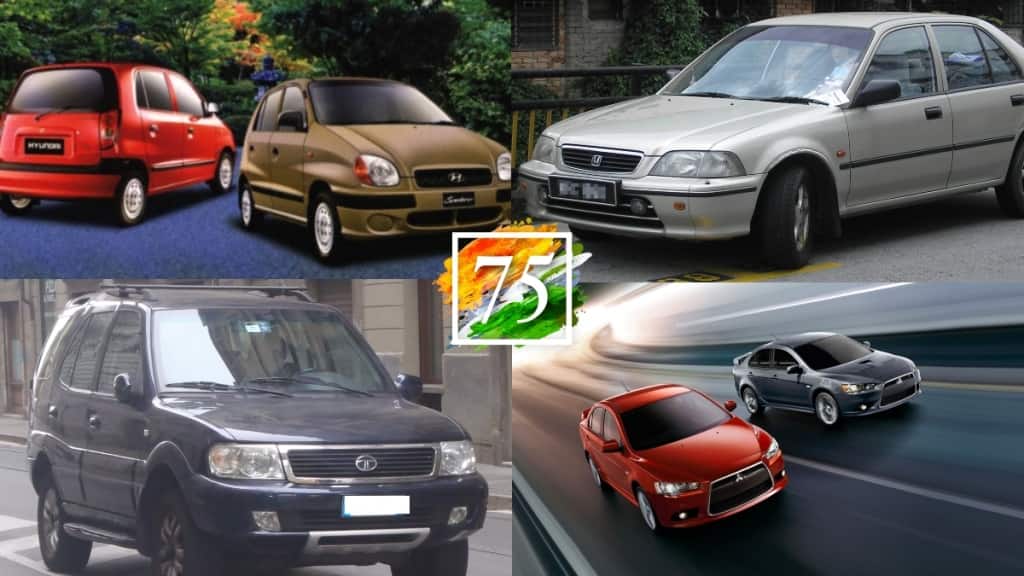 As we celebrate India’s 75th independence, we step inside a time machine and go back to the golden age from 1993 — 2002. Everyone is very familiar with the catchphrase ‘the naughty nineties’, well for India, this decade was an era where our nation forged ahead by taking difficult yet historic decisions in the economic field — Liberalisation, Privatisation, and Globalisation, which completely changed the way of life for each one of us and for the coming generations. The reforms also reignited the Indian automotive industry and suddenly there were many new players entering or about to enter the market. This age saw the evolution of hatchbacks, the introduction of mid-range and premium sedans and the rise of SUVs. Being a 90s kid, I can’t resist but kick start our list of iconic cars with the legendary song title by A.R. Rahman — Maa Tujhe Saalam released in 1997 which embodies our national pride and unity.

In 1993, Maruti Suzuki decided to give the Maruti 1000 a much-needed power bump by introducing the 1.3-litre 4-cylinder petrol motor replacing the 1000cc engine. With the introduction of the Esteem, the new engine had an output of 60bhp, around 15 ponies more than its predecessor. In an era where Ambassador and Premier Padmini ruled the roost in the sedan field, the Esteem changed the game by making its competition look obsolete, unreliable and petrol guzzlers. Maruti Suzuki or as it was named in the 90s, Maruti Udyog changed the face of the Indian automotive industry.

Meet India’s first ‘Mr Worldwide’, the original Zen as it was exported to many countries including Europe. This hatchback in its time was a pioneer when it came to driving dynamics, and power-to-weight due to the all aluminium 993cc powertrain or the Suzuki G10B engine which produced 50 bhp at around 6,000rpm. In terms of design, it struck a chord in car buyers’ hearts and was popularly called the jelly-bean-shaped car, which is quite extraordinary as at that time in India this candy was not easily available. Maruti did flirt with a diesel option in 1998 where they plonked 1527cc TUD5 diesel I4 from Peugeot, but due to lack of takers, they pulled the plug on the Zen D.

General Motors came to India under the Opel brand and created the niche C segment with Astra. The handsome-looking sedan had the road presence of a movie star and came with top-notch features like ventilated front disc brakes and automatic transmission. On the other hand, the 1.6-litre single-point fuel injection engine was an average engine with an output of 76bhp, which was later upgraded. Opel also offered a 1.7-litre diesel motor which pumped around 69bhp.

The late 90s saw a surge of sedans being launched, but one that received decent response initially went on to achieve a cult status is the Honda City. It was launched in both 1.3-litre and 1.5-litre engines. Honda had managed to get the right balance of fuel efficiency and power, but in 2000 the 1.5-litre V-TEC version was launched and virtually became the grim reaper for its competition. While the standard 1.5-litre was powerful enough with an output of 100bhp, the V-TEC trim showcased Honda’s technical prowess. Honda’s groundbreaking Variable Valve Timing & Lift Electronic Control technology controlled and lifted the valves ensuring the sedan offered enough power at both high and low rpm without sacrificing mileage. The VTEC trim had a power output of 106bhp and distinguished itself from the standard 1.5-litre City with 14-inch six-spoke alloy wheels, chrome-finished twin exhausts and a rear spoiler.

The Lancer was the most gorgeous-looking sedan in its class and oozed Mitsubishi’s rally sports pedigree, which only made it a more coveted product. Entering India with Hindustan Motors, the Lancer was the City rival and went toe-to-toe against it for quite a long time. The Lancer was initially launched with an 85bhp 1.5-litre petrol engine. Later on, the company introduced a 2-litre diesel engine which churned out 68bhp. The Lancer was one of the most well-equipped sedans in its time as it offered power windows, power steering that was also adjustable, electrically powered outside rearview mirrors etc.

Hyundai burst into the Indian market with the original tall boy hatchback, the Santro. This unknown brand brought to the table an affordable hatchback with a lot of cabin space, which was never heard of in India. The Santro remained Maruti 800’s nemesis and was responsible for making Hyundai the second largest automobile manufacturer in India. The hatch was powered by a 999cc engine with 55bhp of power with the game-changing Multi-point fuel injection (MPFi), which ensured it offered superior performance over its rivals.

If Santro introduced a spacious and practical cabin, the Matiz brought in cuteness to the hatchback segment. No one can forget the adorable round headlamps and the car’s contemporary design language. In India, Daewoo was the first company to break free from the conservative boxy styling that hatchbacks used to sport. The Matiz was powered by a 796cc 3-cylinder engine with a decent output of around 52bhp, which offered more horses than the Maruti 800.

The Safari wasn’t Tata Motors’ first passenger vehicle SUV, but it certainly was the most complete one. This was an affordable full-size SUV, which was a completely new product starting from the chassis, engine, design, and the works. Originally, Tata Motors plonked a 2-litre diesel engine with an output of 89bhp and was mated to a 5-speed manual transmission. It came with a four-wheel-drive system as an option. The Safari was predominantly a five-seater with two face-to-face seats for the third row.

1999 saw the launch of the Josh machine. Though the Ford Ikon was initially launched with a 1.3-litre with 70bhp and 100Nm. It was in 2002, that the real Josh machine burst into the scene with a 90 bhp 1.6-litre and 130Nm of torque. With its agile prowess and razor-sharp handling capabilities, the Ikon quickly became the most affordable option for enthusiasts. The Blue Oval also offered the sedan with diesel options starting with a 1.8-litre and later a 1.4-litre motor.

1999 saw the launch of two genuine rivals for the Maruti Suzuki Esteem, the Ford Ikon (mentioned earlier) and the Hyundai Accent. The Accent was Hyundai’s first sedan for the Indian market and it was a runaway success. The sedan was more spacious and offered a better ride quality than its competition. Hyundai launched the Accent with a 1.5-litre petrol engine that had a classing leading 92bhp of power output. The sedan also came with an air conditioner and power steering as standard.