5 most dangerous roads in India: Think twice before taking these routes!

India has some of the most dangerous roads in the world. Here we have picked the top five that can make your journey adventurous and scary at the same time. Let us know in the comments section which one you would not want to visit even once in your lifetime. 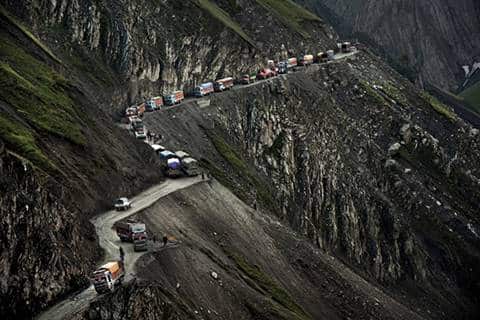 India is one country that has some of the best roads in the world. However, there are also some areas where you will find roads that are no less than a nightmare and while travelling on those, even the blink of an eye can mean the difference between life and death. If you are a traveller, you might have come across such roads while you are on the way to your destination. These roads are tricky and the fact that you don’t know what extreme will happen next make them even more dangerous. So if you are on a road trip that will comprise of travelling on one of these roads, we promise you that your journey is going to be quite adventurous. As safety should always be the first priority, we advise you to get an idea before about how these roads are so that you stay alert and ready even for a mishap. Here we have listed the five most dangerous roads in India that are scary for both two-wheelers and four-wheelers.

One of the most dangerous roads to drive or ride is the Leh Manali Highway. As the name suggests, the said road connects Manali to Leh in Jammu and Kashmir. With a total length of close to 476 km, the road gets snow, water crossings, badly broken stretches and a lot more. The road has a mountain range running in parallel that offers a scenic view but at the same time, make it dangerous to travel too.

Rohtang Pass also makes up for one of the most dangerous roads in India. Located on the eastern Pir Panjal range of Himalayas at a height of 3,979 meters above sea level, this road is just 53 kilometers from Manali. Rohtang pass is usually open from May to November and encounters heavy traffic jams. The road is filled with heavy snow and gets covered with slush which makes it even tricky to drive or ride on it. Furthermore, the road is covered in dense fog for most of the time of the year that further makes the task difficult for the travellers.

Another example of the deadliest road is the Zoji La Pass. A small mistake and you might land yourself with your vehicle down from an altitude of 3,538 meters. One of the prime reasons why the Zoji La Pass is ultimately frightening and scary roads to travel is the fact that it is narrow and you will find snow slush on it for the major portion of the year. The Zoji La Pass connects Leh to Srinagar and acts as a major link between Ladakh and Kashmir.

Last but definitely not the least, the Kinnaur Road which is located in the south-western part of Himachal Pradesh, the road is carved out of rocks. The road has some really sharp and blind turns that make it risky to be travelled on. You will often find news reports of accidents happening on this road due to the fact that the Kinnaur Road is quite narrow and there are some portions on which it is impossible for vehicles from both sides to cross together.