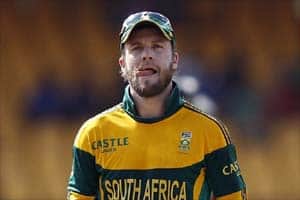 South Africa skipper AB de Villiers admits the Proteas are one of the form sides going into the World Cup but he is reluctant to talk up his team’s chances.

“We’ve been the favourites before in the tournament. It didn’t work out for us,” he said today in Christchurch where South Africa will complete their preparations.

“I’m not really sure if (favourite) is a title that deserves a lot of time and a lot of talking about, but look, obviously the Aussies are the number one in the world at the moment in the shorter format.”

Australia and India fill the top two rankings followed by South Africa and Sri Lanka ahead of the tournament which opens on February 14 in New Zealand and Australia.

The farewell message to the South Africans from their Sports Minister Fikile Mbalula was to not become “a bunch of losers”, which de Villiers took as government pressure to win.

“We understand that and obviously there’s pressure that comes with comments like that, but we don’t mind that,” he said, adding that regardless of the hype the Proteas were desperate to win.

“We understand the kind of pressure that’s on us, and we want to take the trophy back home.”

South Africa have compiled an impressive one-day record over the past year, though they were beaten 4-1 in a series against Australia three months ago.

They have won ODI series against India, Sri Lanka, Zimbabwe, New Zealand and the West Indies, as well as taking a tri-series competition involving Australia and Zimbabwe.

De Villiers is proud of what South Africa have achieved.

“There’s no hiding from that fact. We enjoy being one of the best teams in the world,” he said.

“We’ve beaten the Aussies not too long ago in Zimbabwe, so to have that kind of confidence that we can be the best team in the world, and at the tournament we’ve got the opportunity to prove it, gives us a great opportunity.”

More Stories on
South Africa
Next Story
I am on national duties, everything else can wait, says new dad M S Dhoni