The Maruti Suzuki S-Presso is decently roomy, has a good feature spread and at the same time is reasonably frugal at the pumps, micro-SUV. 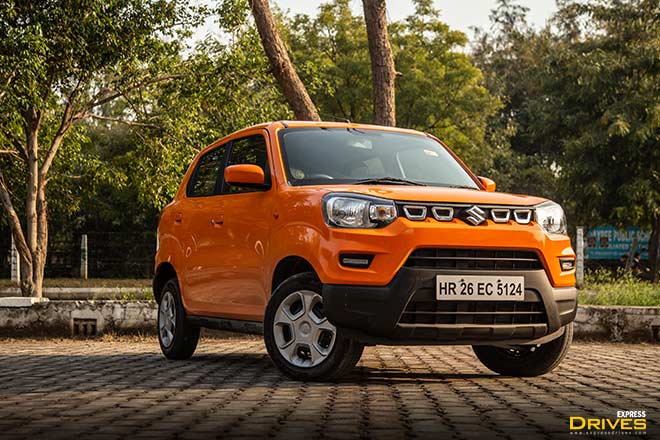 Let’s be honest here for a moment! Apart from that flashy orange colour, the Maruti Suzuki S-Presso has little to distinguish it from a soap box. I am too harsh here and design again is a subjective topic. But, is there something more to this car than just its pure looks (or the lack of it)? I strive to find this out with a road test that spanned for six days and had me driving the car for close to 800km. 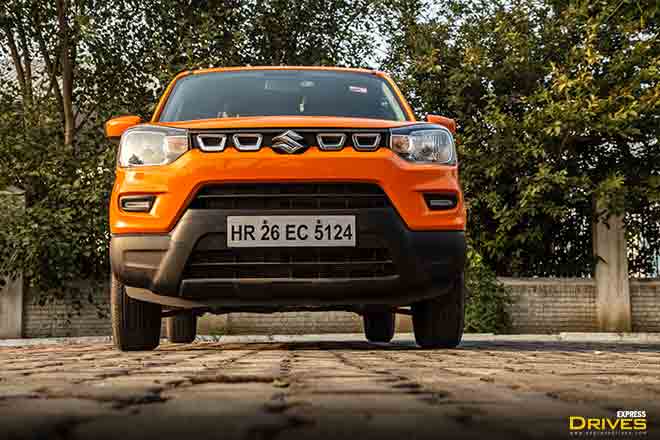 I realised this within 20 minutes of driving out of the Maruti Suzuki showroom. The colour itself warrants that there are second looks wherever you go. There are also many who come close to the car in the hope that they can read the name on the boot lid. Interestingly enough, the test car came with optional DRLs. These DRLs had made use of those dummy switches near the steering and one had to press it hard twice to ensure the lamps were lit. Once you put the headlights on though, these stop working. Nonetheless, the DRLs were small in size but effective. Alloy wheels are not offered as standard but you get full wheel caps. Maruti’s genuine accessories bin though has you covered with their brushed alloy wheels.

The side as well as the rear reminded me of another Maruti Suzuki – Ignis. There is plastic cladding at the front, side as well as rear and it accentuates the SUV-like appearance that MSIL wanted with this car. 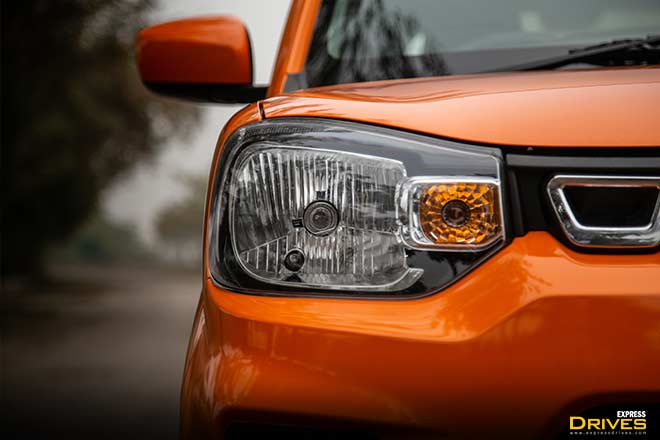 The cabin is high set and looks fresh, especially in my test car wherein it has orange accents for the AC vents. The centrally placed, fully-digital instrument cluster is easy to use and falls in the line of sight. This being said, operating the tripmeters on the drive is a bit of a stretch. I like the SmartPlay Studio infotainment system and it is fluid to use as well. However, it could have been set a bit higher for my liking (I am 6ft, 4′) as looking at maps will still require you to take eyes off the road. There is no steering wheel adjustment (there are steering mounted controls for the audio and bluetooth) or driver seat height adjust on offer. In fact, the ORVMs are manually operated. Maruti has also skimped out on offering a day-night mirror with the S-Presso. There are also no rear power windows and the front switches are placed on the dashboard. While trying to open the window, more often than not, the hazard switch nestled between is activated. The glove box can hold vehicle papers and a sunglass while there are 1-litre water bottle holders in the front door pockets. There are also cavities aft and behind the floor mounted gear lever. For the rear passengers though, there isn’t any door pocket or utility space. 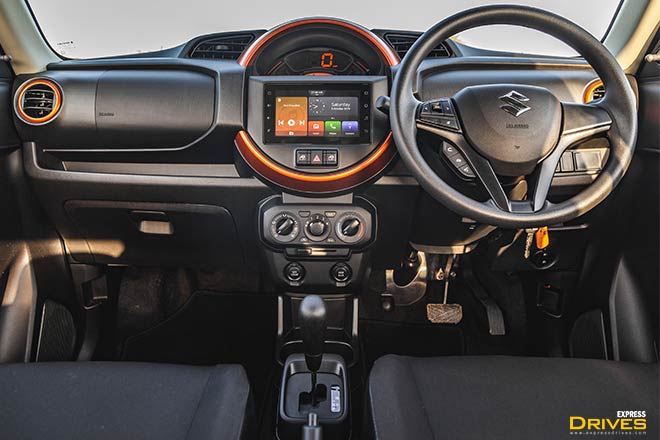 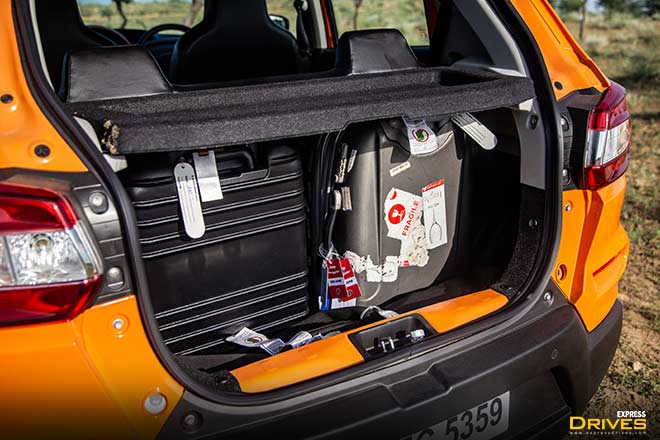 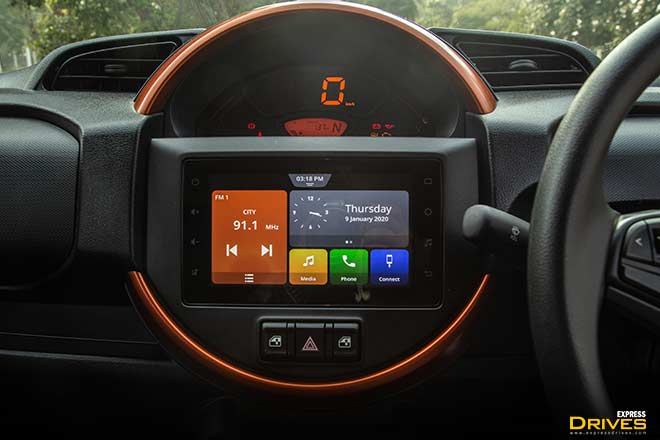 Despite being an entry-level car, the Maruti Suzuki S-Presso’s boot (270 litres) can hold a fair bit of luggage. The loading lip is a tad high though.

Proof is in the pudding

You don’t just sit and gaze at a car, do you? You drive it and if it doesn’t fulfill your driving requirements, it’s probably not worth it. The Maruti Suzuki S-Presso, fulfilled whatever expectations I had from it. It has a relatively known (reliable) engine – the 1.0-litre K-series that is BS-VI fortified. This engine still makes 69hp@5,500rpm and 90Nm of torque at 3,500rpm. One can opt for a 5-speed manual or either an AMT. My test car was the AMT. This was a fine testing bed for the technology as well. Maruti was the first to introduce a mainstream AMT into its car in 2014. Ever since, other makers have also started using this technology. Maruti though has refined the tech to such an extent now that the previous head nods associated with AMT is nearly absent. It is only when you step on the gas that you (if you’re an enthusiast) will notice the ever-so slight pause between shifts. Speaking of which, the gearbox is quick to upshift and seeing 3rd gear at 25kmph is normal. However, for a quick overtake, the gearbox doesn’t downshift as quickly. The manual mode works nicely and is much recommended for overtakes and enthusiastic driving. 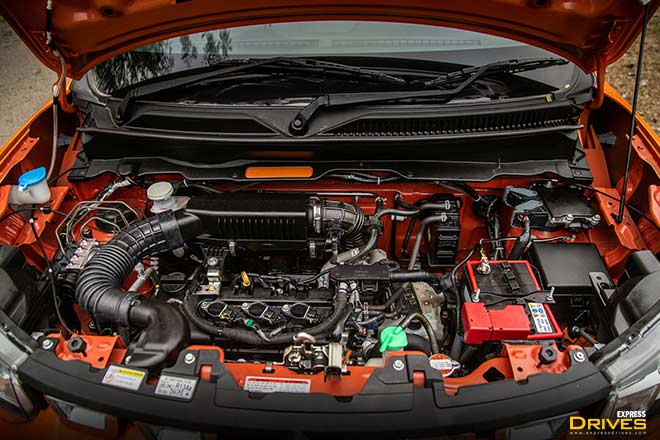 All this points to one thing. The Maruti S-Presso AMT has been tuned to deliver outright driveability as well as fuel economy. The certified fuel efficiency is 21.7kmpl. In my tests, the Maruti S-Presso returned 13.8kmpl in the city and 17.4kmpl on the highway. I will have to confess though that I was driving the car in enthusiastic as well as hurried fashion and this could perhaps have contributed to the not-so impressive fuel economy. Drive the car like you usually will (sedate fashion), with your family, and seeing a 20kmpl figure on the highway isn’t a far away thought. I would have liked a bigger fuel tank but given the fact that the S-Presso will be a rarity on the highway, it is but fair that MSIL opted for a smaller unit (27l).

If you are wondering about the top speed, the S-Presso isn’t an outright fast car. Power comes in a strong fashion till 85kmph, post which building speeds seems a bit laborious for this tiny motor. I did hit a speedo-indicated 140kmph but ran out of road before making any progress. At this point, the generally quiet engine does sound a bit harsh. Maintaining 100kmph on the highway shouldn’t be an issue. After all, those are the speeds that we usually hold on to on the highway, isn’t it?

How good is the ride quality?

The Maruti Suzuki S-Presso is quick to change directions and is nimble in the city. What I appreciate is the mouse-like capability to dart into traffic gaps. The Maruti Suzuki S-Presso is a perfect tool to deal with the city traffic, be it Noida or Mumbai. Visibility all around is decent though I would have wanted a rear wiper as part of the standard fare. The angled rear windscreen collects dust and it isn’t easy to shake it off too. The ORVMs stay put even after you drive through jagged roads. Quality seems to be really good with things staying in their place even after elongated abuse on village roads. There were no squeaks and rattles as well. The steering wheel seems a tad heavy but the weight is beneficial on the highway. The 4.5m turning radius is a boon and makes parking the car a bit easier. This being said, I will still recommend the new drivers to opt for an aftermarket/Maruti accessories rear view camera. 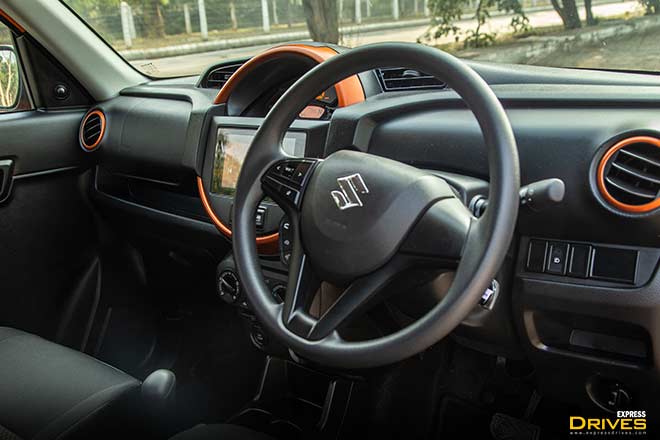 At speeds of 140kmph, the S-Presso feels a bit jittery. For the regular commute as well as occasional highway jaunts, the S-Presso has good stability in spite of the raised proportions. The ride quality feels a bit stiff but isn’t overtly done so. The rear seat passengers though will complain about lack of space, especially if it’s a long journey, elevated seating position notwithstanding. Ingress and egress is good even for the older folks though the rear door opening could have been a bit wider. 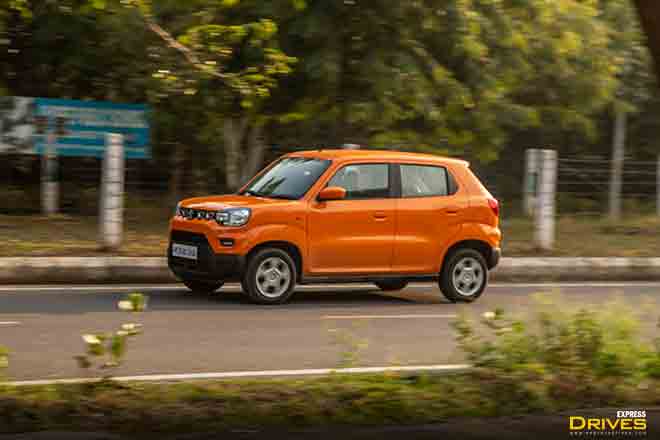 I think I have grown over the design part and begun to appreciate the finer points that this freshly brewed car brings to the table. Much like a strong coffee that you’ve have sipped, the after taste stays. The S-Presso is roomy, has a SUV-stance, is decently equipped and the best of all, is BS-VI compliant and is a Maruti. The latter part because the spares are shared with many other Maruti cars in the fold, thereby making access/pricing much more affordable. Pricing has always been a key aspect in this segment and Maruti has left no stone unturned. The Maruti Suzuki S-Presso price in India starts from Rs 3.69 lakh and goes up to Rs 4.67 lakh (the model I tested), ex-showroom, Delhi. No wonder, Maruti has been steadily converting tea lovers into S-Presso fans every month. 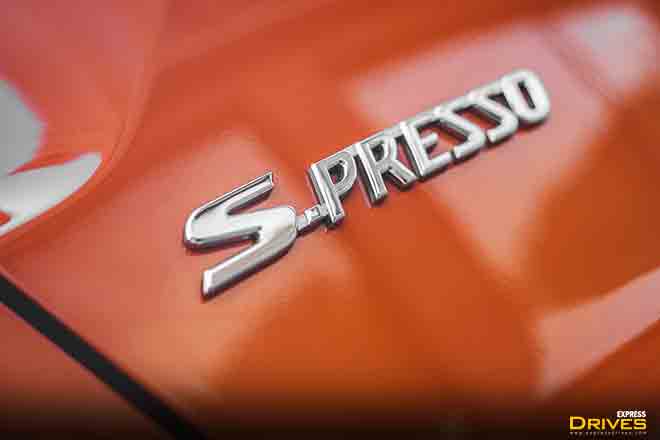 Will I recommend the car? Definitely. It is worth the money though you might have to spend a bit more to add additional features. Perhaps, it is time Maruti Suzuki brings in the S-Presso ZXi trim.