After a global unveil in March, the Volkswagen Virtus is slated for a launch in the second week of June. VW is expected to offer the Virtus in two trims – Dynamic Line and Performance Line. 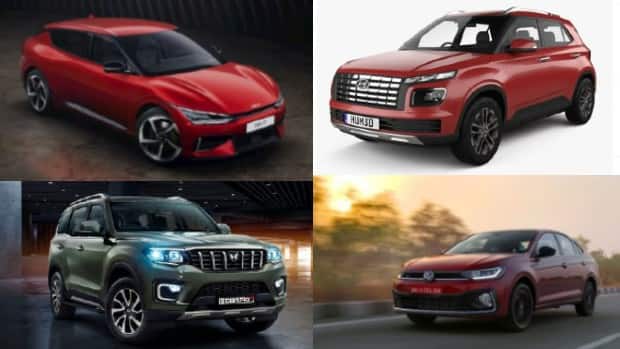 The monsoon is weeks away but it is raining sedans and SUVs as more than 6 cars are slated for a launch in June 2022. Here’s the list for some of the upcoming and hottest new launches next month!

Kia India’s flagship crossover that we have driven quite recently, will be launched in India on June 2, 2022. Globally, the EV6 is available in four variants — Light, Wind, GT Line and GT and it’s available with either a 58kWh battery or a 77.4kWh. It is expected that the India-bound EV6 will be the latter of the two with twin motors and an output of 320bhp and 605 Nm of torque.The Kia EV6 holds a WLTP-rated range of 500km, and might successfully deliver 380-410 kms in real-world driving conditions.

After a global unveil in March, the Volkswagen Virtus is slated for a launch in the second week of June. VW is expected to offer the Virtus in two trims – Dynamic Line and Performance Line.

We have also driven the Virtus and stated that this Slavia-sister is the most powerful sedan in its class. It will get 113bhp, 1-litre TSI variants and 148bhp, 1.5-litre turbo petrol engine packing 250 Nm of torque.

As part of the major mid-life cycle refresh, the Hyundai Venue facelift is expected to have an all-new front end design and a major makeover on the interior. With the styling inspired by the new Tucson SUV and the overseas-sold Palisade, the Venue facelift is expected to be powered by the same 120hp, 1.0-litre turbo-petrol; 115hp, 1.2-litre petrol; and 115hp, 1.5-litre diesel engines.

Lexus is set to offer its flagship LX SUV, the LX500d in India soon. It draws a lot of cues from the Toyota Land Cruiser LC300, like the TNGA-F body-on-frame architecture. The SUV will be powered by a 3.3-litre twin-turbo V6 diesel engine producing 303bhp of power while being mated to a 10-speed automatic transmission.

Quite recently, Mahindra took the wraps off the new Scorpio-N in a series of official images. It is to be noted that the current Scorpio will continue to be alongside the new one. The Scorpio N is likely to be powered by the same engine as the Thar and the XUV700 – the 2.0-litre mStallion turbo-petrol engine and the 2.2-litre mHawk turbo-diesel engine.

Maruti Suzuki will announce the price list for the all the all-new Brezza by the end of June. The compact SUV gets a fresh exterior, new and improved interior features and is likely to be powered by the same 1.5-litre K15C DualJet engine producing 100bhp as the Ertiga and XL6. The engine will be paired with a 5-speed manual gearbox or a new 6-speed torque converter.