The UK government today warned that migrants on spousal visas who fail to speak English may face deportation, as it announced a new 20 million pound fund to improve the language skills among migrant Muslim women. 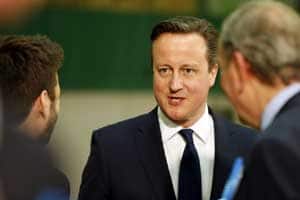 The promised referendum by PM David Cameron will decide the fate of United Kingdom as a part of the presitigious league of 28 nations. (AP)

The UK government today warned that migrants on spousal visas who fail to speak English may face deportation, as it announced a new 20 million pound fund to improve the language skills among migrant Muslim women.

Writing in ‘The Times’ newspaper, Prime Minister David Cameron warned that migrants who failed to improve their fluency in English after two years may face deportation.

New rules will mean that from October this year, migrants coming to the UK on a five-year spousal visa with poor or no English skills will have to take a test after two and a half years to show they are making efforts to improve their English.

“We will now say if you don’t improve your fluency, that could affect your ability to stay in the UK. This will help make it clear to those men who stop their partners from integrating that there are consequences,” Cameron wrote in a commentary.

Arguing that community cohesion is the best antidote to extremism, Cameron pledged to fund English language classes for female migrants.

“We will also fund a dramatic improvement in the way we provide English language services for women. With a new 20 million pounds programme, we will make sure every woman from isolated communities with no English at all has access to classes, whether through community groups or further education colleges,” he writes.

Cameron also flagged up the Pakistani and Bangladeshi communities as the heart of the language barrier in the country.

He writes: “We must also make more progress on English language. It is at the heart of solving this. Consider this: new figures show that some 190,000 British Muslim women or 22 per cent  speak little or no English despite many having lived here for decades.

“40,000 of these women speak no English at all. So it is no surprise that 60 per cent of women of a Pakistani or Bangladeshi heritage are economically inactive.”

The Prime Minister said that English classes will be held in homes, schools and community centres with travel and childcare costs provided to encourage the maximum participation.

“This is Britain. In this country, women and girls are free to choose how they live, how they dress and who they love. It’s our values that make this country what it is, and it’s only by standing up for them assertively that they will endure,” Cameron writes.

He also announced a review of the role of Britain’s religious councils, including Sharia courts, in an effort to confront men who exert “damaging control over their wives, sisters and daughters”.

“At the moment, someone can move here with very basic English and there’s no requirement to improve it over time. We will change that,”  Cameron wrote in the commentary.

Details of the new English language tests will be unveiled over the next few months.