India vs Australia: Will be flooded by Hughes Phil’s memories in Sydney Test, says Shane Watson

Not too enthused by the idea of being back on the ground where Phillip Hughes was fatally struck, Australian all-rounder Shane Watson… 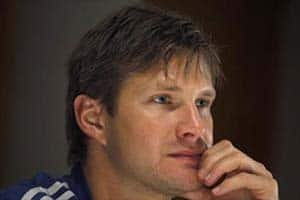 Not too enthused by the idea of being back on the ground where Phillip Hughes was fatally struck, Australian all-rounder Shane Watson today said memories of the late batsman will flood him the moment he steps out to compete in the fourth cricket Test against India here.

Hughes lost his life in November last year after being struck on the back of his head by a Sean Abott bouncer during a domestic match at the Sydney Cricket Ground.

The tragedy left the Australian team distraught and even forced a rescheduling of the ongoing Test series against India. Emotions will once again weigh heavy when the team competes at this ground from January 6.

“It’s the first time I’ve been back here since just before Phil’s funeral. It was always a time that I wasn’t really looking forward to, coming back to the ground. But in the end, enough time has sort of passed to be able to find my own personal way to be able to deal with what happened to Phil.

I’m sure once I get out into the middle and playing, those visions will be coming back,” Watson told reporters here.

“We’ve only really come together just now, so I’m sure we will (speak as a group) over the next couple of days, especially the guys who were on the field at that moment,” he added.

“I still haven’t been out in the middle yet so I’m sure once I go out there all those memories will come flooding back very quickly.”

Australia have already won the four-match series after taking a 2-0 lead.

Another thought which has been dominating Watson’s psyche is his relatively poor showing in the series so far, especially with the bat.

“So far in this series I’ve been very disappointed with my output. I’ve been working very hard on my game, to be able to put all the pieces together after breaking it down in the off-season,” he said.

“I feel I’m under pressure when I’m not scoring runs at any stage. If I’m not performing of course I’m under pressure. The thing I think about the most is to just being able to contribute to the team, not whether I’m playing or not,” Watson said.

But the imposing all-rounder said he has been getting back in form and it was evident from the way he managed to deal with the short ball without much trouble.

“Melbourne was the first time I really started to feel the confidence sort of grew back in myself and my game to know that my instincts are going to be hopefully good enough to play the short ball well and not get myself in too much trouble,” he said.

Watson said he has also taken inspiration from vice-captain Brad Haddin, who faced the short ball with steadfast determination.

“I think just in general how Brad took on what the Indians served up to him in Melbourne was incredible. He’s a tough man – he’s not going to take a backward step, he’s always going to find a way to take on the game,” he said.

“And Brad was out on the ground as well (on the day Hughes was hit) so we’re all dealing with it in our own way after what we saw. So to be able to see Brad play the way he did and take it on was awesome.”