US primed to unlock potential of ties with India: Barack Obama 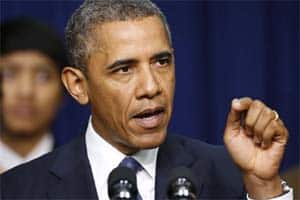 The US is “primed to unlock” the potential of relations with India as part of its rebalance to Asia and the Pacific, President Barack Obama has said as he unveiled his new national security policy, days after his historic second trip to India.

Sending his second National Security Strategy (NSS) to Congress, Obama said, “We are primed to unlock the potential of our relationship with India.”

“Our rebalance to Asia and the Pacific is yielding deeper ties with a more diverse set of allies and partners. When complete, the Trans-Pacific Partnership will generate trade and investment opportunities â€” and create high-quality jobs at home â€” across a region that represents more than 40 per cent of global trade,” he said.

Running into more than 30 pages, the National Security Strategy says, in South Asia, the US continue to strengthen its strategic and economic partnership with India.

“As the world’s largest democracies, we share inherent values and mutual interests that form the cornerstone of our cooperation, particularly in the areas of security, energy, and the environment,” it said.

“We support India’s role as a regional provider of security and its expanded participation in critical regional institutions. We see a strategic convergence with India’s Act East policy and our continued implementation of the rebalance to Asia and the Pacific,” the strategy said.

“At the same time, we will continue to work with both India and Pakistan to promote strategic stability, combat terrorism, and advance regional economic integration in South and Central Asia,” said the National Security Strategy.

This is the second national security strategy of the Obama administration, the first one being released in May 2010.

In the 2010 strategy, the White House said the US and India are building a strategic partnership that is underpinned by their shared interests, shared values as the world’s two largest democracies, and close connections among people.

“India’s responsible advancement serves as a positive example for developing nations, and provides an opportunity for increased economic, scientific, environmental, and security partnership,” the 2010 edition of the NSS said.

Obama said the scope of US cooperation with China is unprecedented, even as US remains alert to China’s military modernisation and reject any role for intimidation in resolving territorial disputes.

US Stock Market
S&P 500 to reach 5050 on continued robust earnings growth, says J.P. Morgan
Fund Managers maintain bullish stand on stocks, BofA survey shows; expect inflation to fall in 2022
Nasdaq 100: What strategists see for US stock market as treasury yields spike
NASDAQ Composite Index down by nearly 8% from 52-week highs – Check details
US Federal Reserve losing its fight against inflation, says Bill Ackman, wants 50 bps rate hike
View All
Latest News
‘Earlier there were monologues. Now there is a voice talking back’
Better than most: Meet Akshay Bhatia, brightest Indian-origin talent in the world right now
Rights and duties: ‘What is worrying PM Modi so much…’
Across the Aisle by P Chidambaram: No political price yet
Nepal, Egypt, Italy to Kenya – A look at Republic Days around the world
Young voices: More and more children are coming forward as opinion makers
The era of smart savers: How fintech industry is revolutionising finance in India
Most Read
The digital fence | Book excerpt – The Art of Bitfulness: Keeping Calm in the Digital World by Nandan Nilekani & Tanuj Bhojwani
BTS to Bollywood: The irrefutable power of social media and new-age celeb connections
The only constant | Book Review – How to Change: The Science of Getting from Where You Are to Where You Want to Be By Katy Milkman
FabIndia plans Rs 4,000 crore IPO; promoters to gift over 7 lakh shares to artisans, farmers
Photos
In Pictures: Indian Army patrols in heavy snow in Jammu and Kashmir’s Poonch
3 days agoJanuary 20, 2022
Share
Satellite images show huge damage in Tonga; Scientists say this underwater volcanic eruption may harm environment for years
5 days agoJanuary 18, 2022
Share
Realme 9i first look, impressions: Design, specs, features, and everything to know
5 days agoJanuary 18, 2022
Share
Read More
×
UP Election 2022: Amit Shah campaigns door to door in Kairana, meets families who had migrated in 2014
Punjab Election 2022: Capt Amarinder Singh to contest from Patiala seat
J&K Assembly polls after delimitation, statehood to be restored once situation normal, says Amit Shah
Delhi HC directs UIDAI to give info of people issued fake Aadhaar cards
Punjab Election 2022: Majithia accuses CM Channi of illegal sand mining; Sidhu hits back
PM Modi asks districts to set time-bound targets for govt programmes to increase ease of living