Mumbai rains: Why excess water choked maximum city; how the problem can be solved

Mumbai rains: Heavy rains stopped everything in Mumbai on Tuesday, leading to the death of many people and leaving thousands of commuters stranded. 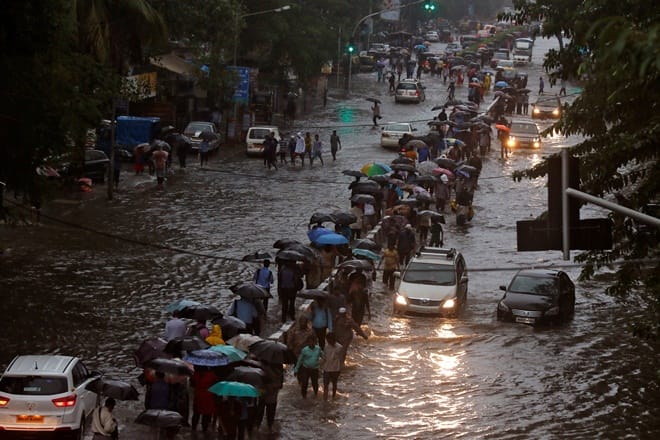 Heavy rains stopped everything in Mumbai on Tuesday, leading to the death of many people and leaving thousands of commuters stranded across the city as transportation services failed to serve. Even the navy was called in for help in relief operations. In several parts of the city, waist-high water was seen and it also entered in thousands of homes. There were also power cuts in many areas, while several vehicles were seen floating in the water in many areas.

The maximum city received 316 mm rain yesterday, which was the heaviest since July 26, 2005, record of 944 mm rain. The rains in 2005 had caused the worst havoc in decades in the business capital of the country. It has been 12 years, but authorities in the financial hub don’t seem to have taken the lessons from 2005 havoc.

The city is run by India’s richest civic body Brihanmumbai Municipal Corporation, led by Shiv Sena. It came under attack from several quarters on Tuesday but the municipal body denied its failure, saying the situation was “exceptional” and its machinery was geared up to meet the situation. Incidentally, ahead of the rains, BMC had promised no water logging in the city this year.

Heavy rains choking the maximum city has become almost an annual affair in the last decade. The reasons are old but not addressed sincerely. In August 2005, Frontline had analysed the reasons that had then choked the city. They remain valid even now. “The writing has been on the wall for a long time. So whether it was 95 cm or 50 cm of rain is not the issue. It has nothing to do with the quantum of water. It has everything to do with the faulty planning of the city. In any case, disaster management planning is supposed to be for 1.25 to 1.5 metres of rain within 24 hours,” the cover story written by Chandhrashekhar Prabhu had said then.

Prabhu pointed out that flooding in the city happened for two reasons. First, during high tide water hits the city and if it rains simultaneously, the surplus water is blocked by the high tide. Sometimes, it said, the sea even enters the city. Explaining further, he wrote dissipation spaces like wetlands, wastelands, mangroves and salt-pan lands, that act like sponges and take the pressure out of the high tide, had been destroyed “systematically” over the past decade by “destructive development” of the city.

However, should the civic bodies and government be blamed all the time?. Mahesh Vijapurkar wrote for First Post in May this year that people should also be equally blamed for flooding on the streets during rains — people who carelessly block the drains by throwing garbage including plastic materials.

Most of Mumbai’s drain water goes into the sea or the Mahul creek, Mahim creek or Thane creek. Some drain water goes into the Mithi river, which if flooded directly impacts Mumbai’s railway system. The river is crucial for storm water drainage as it separated the main city from its outskirts. However, over the years, land encroachment along the banks of the river have disrupted it course, while untreated sewage, wastewater, industrial effluents, and garbage have clogged the river.

Shockingly, Mumbai’s storm water drainage system was built during the British rule. Since then, no government has tried to build an advanced drainage system. At present, the city’s drainage system is capable of handling 25 mm rain. Roads get flooded if it rains more than this.

In March this year, the BMC had told Bombay High Court that it had completed 95% work on deepening and widening the river to prevent water logging during rains. BMC claims, however, fell flat with heavy rains.

Is there any solution to Mumbai’s water woes?

Over the years, experts have suggested several solutions to prevent water logging during rains in Mumbai. These include rainwater harvesting, widening and deepening of drains, complete ban on plastic bags at the manufacturers’ level itself and clearing of encroachment along the banks of Mithi river.

Urge the people of Mumbai and surrounding areas to stay safe & take all essential precautions in the wake of the heavy rain.

The city can also take some cue from one of China’s ambitious plans to mitigate urban flooding.

In December 2013, President Xi Jinping had announced the ambitious national plan to combat flooding in Chinese cities. “He (Xi) said that during the upgrade of urban drainage infrastructure they should make it a priority to retain valuable water resources and to utilise the natural system to achieve drainage, to establish natural retention, natural infiltration, and natural purification – like a sponge city,” Michael Zhao, a water management expert, had told The Guardian last year. Zhao had remarked was a “very positive change” to manage water woes in cities in a sustainable way.