Winged guests from far off places such as the Caspian Sea, Lake Baikal, remote parts of Russia, Central and Southeast Asia, Ladakh and the Himalayas descend on the Chilika lake every winter for feeding and roosting. 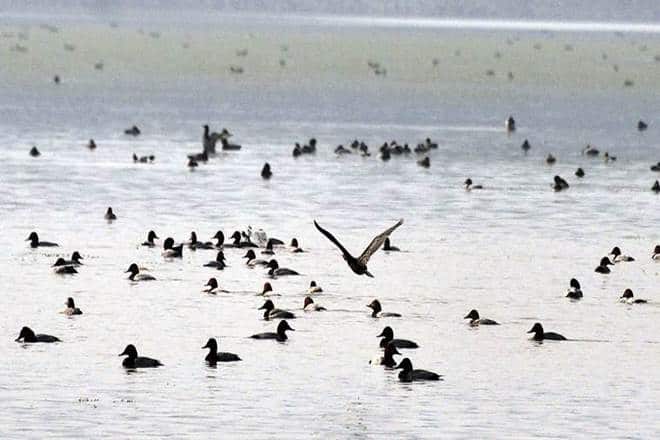 Last winter a total of 8,93,390 birds belonging to 147 different species had been counted in the Chilika lake (Express File Photo)

The bird population in Chilika, Asia’s largest brackish water lagoon located in Odisha, has increased this year by over 1.55 lakh when compared to last winter, forest officials said. The annual bird census conducted by the Chilika wildlife Division on Friday revealed that a total of 10,47,868 birds belonging to 181 different species have taken shelter in 1,100 sq km vast lagoon this winter, they said. These included 105 different species of waterfowls and 76 species of water dependent birds, the Divisional Forest Officer (DFO), Chilika Wildlife Division, Bikash Ranjan Das, said.

Last winter a total of 8,93,390 birds belonging to 147 different species had been counted in the lake, he said.

The Nalabana island inside the lake continued to be the most favourite destination for the winged guests, as the highest number of migratory birds took shelter in the 15.59 sq km sanctuary area this year.

Also Read
Who is Zakir Naik and why has his presence at FIFA World Cup in Qatar sparked a controversy?
NPAs rose by 365 per cent under Modi govt: Congress slams Centre over “unbridled powers” to PSU banks
Boneless man: Meet superhuman Jaspreet Singh Kalra aka Rubber Man of India
Gujarat Election Live Updates: Amit Shah invokes Sardar Patel, says Congress did everything possible to ‘insult’ him

The census has revealed that this winter a total of 3,93,541 of migratory birds took shelter at the Nalabana Bird Sanctuary area. Last year around 3,20,826 birds had taken shelter at the sanctuary during winter, officials said. Around 60,000 birds of various species have taken shelter in Mangalajodi area, next to Nalabana, in the lake, the DFO said.

Ornithologists have been delighted as the lesser flamingos have returned to the lake after four years. During the bird census, the enumerators have spotted 13 such bird species (lesser flamingos) in the lake, he said. This year, the highest number of Northern Pintails (2,57,880) have come to the lake. The increase in number of migratory birds this year might be due to the availability of open space, following the eviction of illegal prawn gheries by the Chilika Development Authority (CDA), the DFO said.

Besides, snowfall in their original habitat, could be another reason for the birds to fly to the Chilika, in order to escape the biting cold, ornithologists said. Around 100 persons, including ornithologists from Bombay Natural History Society (BNHS) in Mumbai, officials of wildlife organisations and wildlife activists took part in the bird count in the lake on Friday.

Winged guests from far off places such as the Caspian Sea, Lake Baikal, remote parts of Russia, Central and Southeast Asia, Ladakh and the Himalayas descend on the lake every winter for feeding and roosting. They start their homeward journey with the onset of summer.