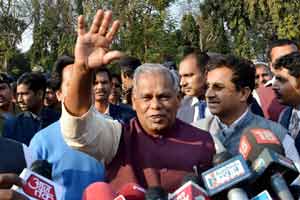 Bharatiya Janata Party (BJP) today said it will “wait and watch” and decide its strategy on the floor of the House when Bihar Chief Minister Jitan Ram Manjhi makes the bid to prove his majority even as it blamed Nitish Kumar’s “craving” for power for the current instability in the state.

BJP also accused JD(U) leader and former Chief Minister Kumar of being “hungry for power” and said he wanted Manjhi to be his “puppet”. The party further claimed that Kumar stands exposed on his move to renounce power in Bihar.

“As the main opposition, BJP is keeping a close watch and will present its opinion in the Assembly. After the Governor decides, then only will BJP put forth its position on the floor of the House,” said BJP spokesperson Shahnawaz Hussain.

Sharpening the attack on Kumar, BJP said he should adopt patience and not be in a hurry to return to power. Kumar should have faith in the Constitution and Bihar Governor Keshari Nath Tripathi, who will decide on issues as per constitutional provisions, he said.

“BJP feels Kumar is responsible for the current situation in Bihar. He cannot remain out of power for long. People in Bihar are very unhappy with the events.

“There is frustration in JD(U) and that is why Kumar is so impatient about coming to power. He should have faith in the Constitution and in the Governor, before whom he is making his demands,” said Hussain.

He averred that the majority has to be proved on the floor of the Assembly as per the Constitution and not on the streets. He also attacked Kumar, saying he was playing politics in the name of ‘Mahadalits’, the community to which Manjhi belonged.

The BJP leader said Manjhi looks confident about proving his majority while the Kumar camp was “disappointed”. That was the reason why Kumar and his supporters were putting forth deadlines before the Governor, Hussain claimed.

“We haven’t taken any decision yet but we are sure that Manjhi, according to his statements, is very confident and Kumar’s camp looks very disappointed,” he said.