India at 75: Here is a quick look at the cars launched after independence between 2013 to 2022, which include popular SUVs and even EVs. This is the most important representative of the evolution trail that modern India is treading upon in the world of mobility. 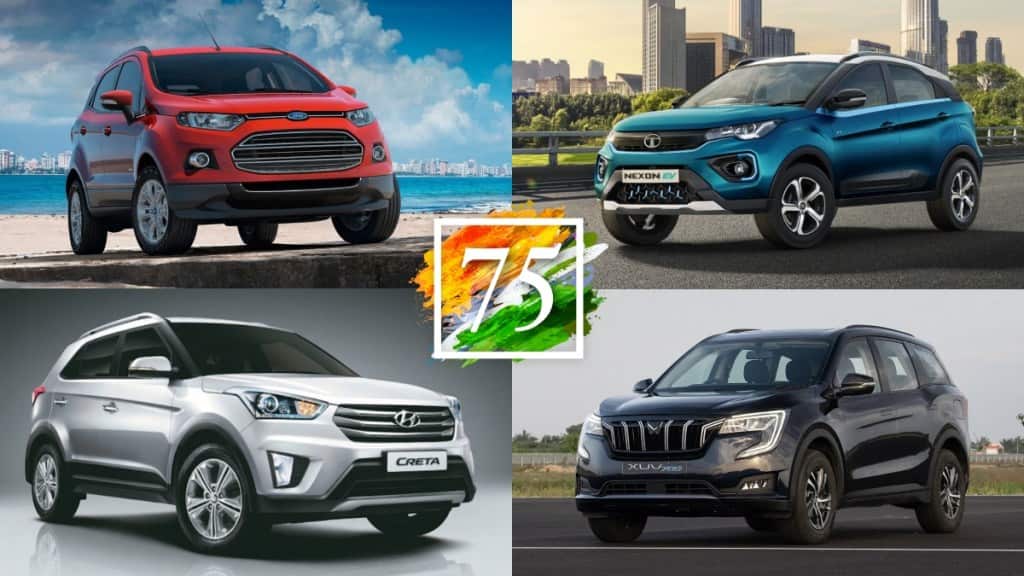 India is gearing up to celebrate 75 years of Independence on August 15, 2022. In the last 75 years, the country has progressed a lot, including the Indian automotive industry. From importing CBUs (completely built units) to assembling and manufacturing vehicles to exporting them all across the globe, the automotive industry is a shining example of ‘Aatmanirbhar Bharat’ and ‘Make in India, Make for World’.

As the country gears up for the celebration of the 75th Independence day, we take a look at some of the iconic cars made in India in the last 75 years. This is the last story of this ‘India at 75’ automobile series and you can read its part 1 and other stories by clicking HERE. In this article, let’s check out the new-age cars launched in India between 2013 to 2022.

Ford EcoSport was one of the first sub-4-metre compact SUVs to be launched in India and it was an instant hit. The EcoSport was launched in June 2013 at a starting price of Rs 5.59 lakh, ex-showroom. Its aggressive pricing sent shockwaves through the industry. Within 17 days of launch, it managed to gather over 30,000 bookings. The Ford EcoSport revolutionised the sub-compact SUV space in India and forced other carmakers to enter this lucrative segment.

The first-generation Maruti Suzuki Celerio was launched in India at the 2014 Delhi Auto Expo. It created a buzz among car buyers as it became the most affordable automatic car in the country, thanks to the new AMT (automated manual transmission) technology. Following Celerio, other Maruti Suzuki cars also got this transmission tech and even a number of other carmakers adopted this technology. Today, AMT is widely available in all affordable family cars in India.

The Hyundai Creta is one such car that needs no introduction at all. Its first-gen version was launched in 2015 and at the time of launch, it had over 15,000 bookings, one of the highest pre-booking numbers in India back then. The Hyundai Creta set the benchmark in the mid-size SUV segment and with a wide array of engine options, there was a Creta for everyone. Its second-gen version was launched in 2020 and it’s more popular than ever.

Mumbai-based home-grown automaker, Tata Motors, ventured into the sub-compact SUV space with the Nexon in 2017. The Tata Nexon garnered a good initial response from the car buyers. However, its popularity increased majorly in 2018 when it became the first made-in-India car to achieve a 5-Star safety rating in the Global NCAP crash test. Since then, there has been no looking back and the Nexon, with average monthly sales of over 14,000 units, is currently one of the best-selling sub-compact SUVs in India.

The Indian car market is one of the toughest markets in the world and it’s not easy for a new entrant to make its mark. However, Kia is an exception. This South Korean carmaker made its India debut in August 2019 with the Kia Seltos mid-size SUV and became a household name in the country in no time. In fact, more than 3 lakh Seltos are currently on the Indian roads and 2 lakh other Kia cars. The Kia Seltos shares its underpinnings and mechanicals with its cousin, Hyundai Creta, and both these SUVs are very popular in the country.

EVs are the future! Whether one likes electric vehicles or not, there’s no denying the fact that ‘vroom’ sound will soon become ‘eeeee’ and EVs will replace ICE vehicles in the distant future. When it comes to the EV scene in India, the Nexon EV will be remembered as the vehicle that started it all. Tata Nexon EV was launched in January 2020 and it revolutionised the long-range EV segment in India. Moreover, it is one of the most affordable electric SUVs in the country.

The Nissan Magnite made its India debut in December 2020. All thanks to its well-balanced package and aggressive pricing, it became the turn-around product for Nissan in India. In fact, the Magnite played a vital role in saving this Japanese carmaker’s future as prior to its launch, the company was struggling with low sales and no product roadmap. Today, the Nissan Magnite is selling in good numbers and it’s also exported from India to 15 countries all over the world.

Finally, the last car on this list is again from a home-grown automaker, but this time from M&M. The Mahindra XUV700 was launched in India in August 2021 and around 50,000 units of this SUV were booked in just 3 hours. Today, this mid-size SUV commands a waiting period of up to 2 years. The Mahindra XUV700 is the most feature-rich car from an Indian automaker yet. It gets loads of features, including ADAS (Advanced Driver Assistance Systems), and is also one of the safest made-in-India cars yet.