The new Yamaha R15 V4 takes design inspiration from Yamaha’s all-new middle-weight supersport motorcycle, the YZF-R7. The motorcycle gets a completely new front fascia. Now, gone are the dual-LED headlamp set-up of the R15 V3, instead, the new R15 V4 gets a single LED projector headlight that is flanked by LED DRLs. It also gets a new visor, re-designed fairing, new seats, etc. This time around, Yamaha has even launched the ‘M’ variant of the R15 which looks even more sporty and to know the exact differences between the R15 V4 and the R15M, you can click HERE.

In terms of equipment on offer, the new-gen Yamaha R15 V4 is leaps and bounds ahead of its predecessor and it gets loads of features, including some segment-first ones. While the old R15 V3 used to get a digital instrument cluster with no connectivity options, the new R15 V4 gets a revised instrument cluster inspired by the mighty YZF-R1 with new features like Bluetooth connectivity, a gear shift indicator along with Track & Street modes, etc. It also gets a slip & assist clutch, which was offered on the R15 V3 too.

The new-gen Yamaha R15 V4 gets a traction control system along with a quick-shifter on select variants for smooth and clutchless upshifts. Also, for the first time ever, the India-spec Yamaha R15 gets USD forks at the front which is one of its biggest highlights. The old R15 V3, on the other hand, used to get telescopic front forks. At the rear, it gets a mono-shock absorber. For braking duties, the new R15 V4 features disc brakes at either end with dual-channel ABS as standard. The Yamaha R15 V4 continues to get the same tyres as the outgoing model. 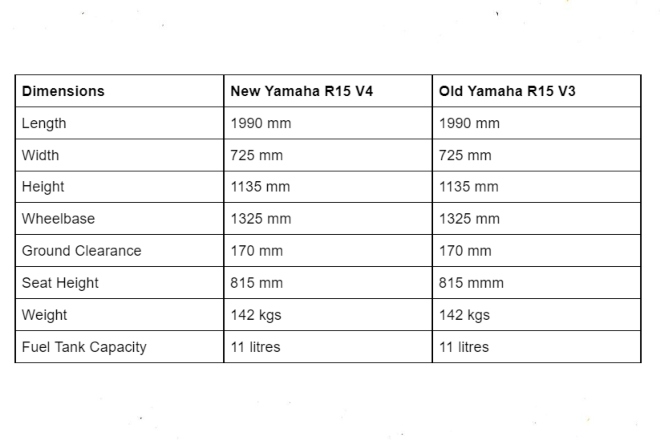 In terms of dimensions, the new Yamaha R15 V4 and the old R15 V3 are completely identical to each other. In fact, at 142 kgs, both these iterations of the Yamaha R15 even weigh exactly the same.

The new Yamaha R15 V4, as well as the R15M, get the same engine that used to power the R15 V3. However, with some minor tweaks. These new motorcycles are powered by a BS6 compliant 155cc, single-cylinder, liquid-cooled, fuel-injected engine. This motor now churns out 18.4 HP of power at 10,000 RPM, which is 0.2 HP less than the outgoing model. However, it develops 14.2 Nm of peak torque at 7500 RPM, which is 0.1 Nm more than the R15 V3 and that too at 1000 RPM earlier than before. The engine comes mated to a 6-speed manual gearbox and these motorcycles get Yamaha’s VVA or Variable Valve Actuation technology too. 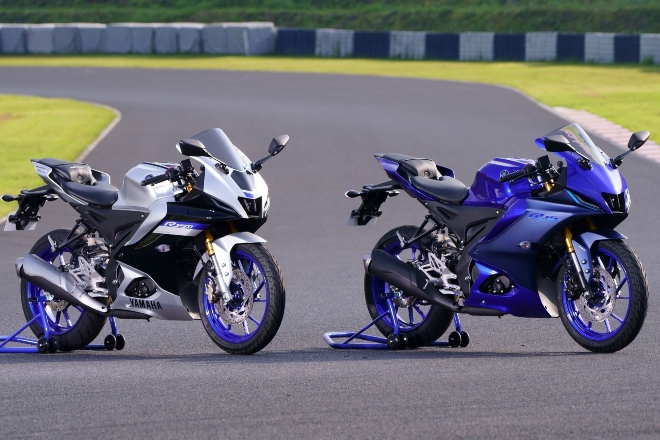