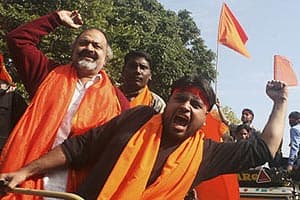 Hindu Mahasabha national president Chandra Prasad Kaushik has also sought a debate on the entire issue and said that the reasons given in the Court by Godse for killing Gandhi should be made public.

“We are going to demand for a place from the government for installation of the bust. If the government fails to provide us with such a place then we will install it at our places.

“We have Hindu Mahasabha, which has offices in various states. We will install the busts there. We will write a letter to the government,” Kaushik said.

He claimed the opinion that Godse was a murderer, was not of the entire nation.

“The country should debate this and there should be a survey done on this. If a selected few in the country say that Gandhi was great and Godse was a murderer, we do not accept this. The country’s citizens have not said this.

“This was said by those who were sitting in the government. The judge who sentenced Godse wrote a book later in his life in which he stated that if people were made jury during that period, then Godse would have been released,” Kaushik claimed.

He further demanded that, “The reasons for killing Gandhi given by Godse in Court should be made public.”

Godse killed Mahatma Gandhi, apostle of non-violence, by shooting in his chest three times at point-blank range on January 30, 1948 in New Delhi.

BJP MP Sakshi Maharaj had said, “Godse was an aggrieved person. He may have done something by mistake but was not an anti-national. He was a patriot.”

However, after his remark triggered a row, the Unnao MP retracted saying, “I do not consider him a rashtra bhakta (patriot). I might have said something by mistake.”