Modi Cabinet reshuffle: All about the MPs who may make it

Prime Minister Narendra Modi is preparing to rejig his Council of Ministers and the upcoming UP polls could be one of the major factor for the reshuffle. 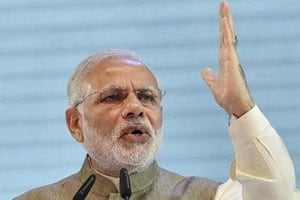 According to Rajiv Srivastava, Managing Director, HP Inc. India, the Digital India vision is driving transformation for the Indian businesses and citizens. (

Prime Minister Narendra Modi is preparing to rejig his Council of Ministers and the upcoming UP polls could be one of the major factor for the reshuffle.

Speculations are rife on which ministers would be inducted in the cabinet and who would be shown the door.

According to reports,  the names of these MPs are doing the rounds. FE.com profiles these eight candidates that may be inducted in the Cabinet.

1) Anupriya Patel: She is a leader of Apna Dal. She was elected to the Lok Sabha from the constituency of Mirzapur in the 2014 election. Including her in the cabinet, the BJP would like to woo the OBC votebank. Daughter of Sone Lal Patel, who founded the Apna Dal political party, she has done graduation from Lady Shri Ram College for Women, Amity University and Kanpur University. She has a Master’s degrees in Psychology.

2) Arjun Meghwal: MP from Bikaner. Served as IAS officer in the various capacities in Rajasthan Cadre. Participated in many programmes for the development of the Rajasthani language; extended full cooperation in various capacities for recognition of Rajasthani as an Indian language in VIIIth Scheduled of the Indian Constitution.

3) Yogi Adityanath: Yogi Adityanath is BJP MP from Gorakhpur and is next in line to be the head priest of the famous Goraknath Temple. Recent media reports suggests that his name was doing the rounds for BJP’s CM candidate of Uttar Pradesh. He is considered as a highly polarising politician with a knack of stirring controversies.

4) Raghav Lakhanpal: Is a BJP MP from Saharanpur in Uttar Pradesh. He is an alumni of Doon School and vice president of Bharatiya Janata Yuva Morcha (BYJM)

5) Navjot Singh Sidhu: Navjot Singh Sidhu is a former Indian cricketer and Member of Parliament from Amritsar between 2004 and 2014. Sidhu won on a Bharatiya Janata Party ticket from the Amritsar seat in 2004 polls. After resigning due to a court case against him, he stood again after the ruling was stayed.

He won a by-election with a good majority. In the 2009 elections, he kept the Amritsar seat defeating Om Prakash Soni of Congress. He was recently nominated by the Modi govt to Rajya Sabha.

6) Rameshwar Teli: He is a MP from Assam and a BJP member. He has been elected to the Lok Sabha from the Dibrugarh in 2014. He lost 2011 assembly elections by around 3000 votes to Amiya Gogoi.

7) Bhagat Singh Koshyari: Member of the Bharatiya Janata Party from Uttarakhand. RSS veteran Koshyari served as National Vice President of BJP and party’s 1st State president for Uttarakhand. He also served as 2nd Chief Minister of Uttarakhand from 2001 to 2002 and thereafter, he was the leader of the opposition of the Uttarakhand Legislative Assembly from 2002 to 2007.

8) Ajay Tamta: He is a member of Parliament from Almora constituency after being elected in the General Elections of 2014. He was also elected as member of Uttarakhand Legislative Assembly from Someshwar.