India has protested to the UK over a planned rally to mark “Burhan Wani Day” in Birmingham on Saturday, questioning how the British government can allow the “glorification of terrorists” on its soil. 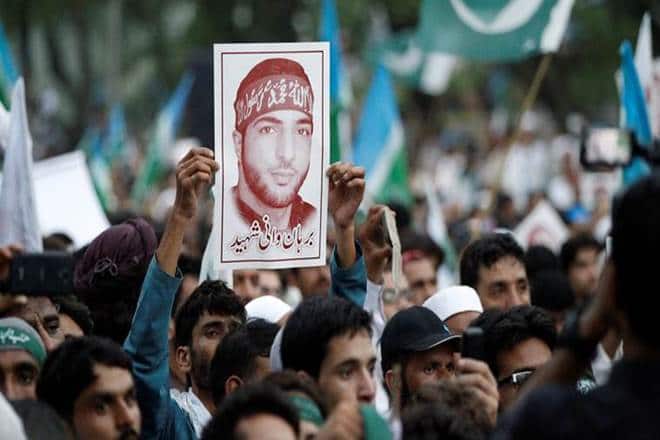 India’s deputy high commissioner, Dinesh Patnaik, sent a "note verbale" on Monday to the Foreign Office including details of Wani’s crimes and propagation of violence in the Valley. (Reuters)

India has protested to the UK over a planned rally to mark “Burhan Wani Day” in Birmingham on Saturday, questioning how the British government can allow the “glorification of terrorists” on its soil. The Indian High Commission in London wrote to the UK Foreign Office to register its protest. The rally is planned by UK-based Kashmiri groups to mark the first death anniversary of the commander of the Hizbul Mujahideen militant outfit killed in a gun battle with Indian armed forces in the Kashmir Valley on July 8 last year.

India’s deputy high commissioner, Dinesh Patnaik, sent a “note verbale” on Monday to the Foreign Office including details of Wani’s crimes and propagation of violence in the Valley. “A rally on Kashmir is a different matter but to glorify and eulogise a terrorist is unacceptable. The UK itself has suffered at the hands of terrorism in the last few months and lives have been overturned as a result. How can law and order allow such a glorification of terrorists and propagation of violence,” wrote Patnaik.

The senior diplomat also questioned if the UK government would allow the same UK-based protest groups, which have their origins in Pakistan, to organise a rally in favour of Pakistani-origin Khuram Butt and other terrorists involved in the attack on London Bridge last month which claimed eight lives.

“If the same people celebrating Wani were to plan a similar glorification of Khuram Butt and the other London Bridge terrorists, would this country’s law and order allow that to go ahead as well,” he questioned, adding that the joint statement issued following British Prime Minister Theresa May’s visit to India in November 2016 had categorically stated joint action against all forms of terrorism.

A “note verbale” is an unsigned diplomatic communication prepared in the third person and is used by foreign missions to highlight issues of importance between countries. The UK Foreign Office said the note “has been looked at” and will be handled by the relevant geographical desk within the department before a response can be issued.

A meeting was held earlier this week in Sparkbrook area of Birmingham to plan for the rally, scheduled to take place outside the Council House in the heart of the city in the West Midlands region of England on Saturday afternoon. Groups such as Tehreek-e-Kashmir Europe are believed to be involved in the organisation of the rally as part of a so- called “Martyrdom Day” call for Wani from Pakistan-occupied Kashmir.

The same groups were caught on camera waving images of Wani and “We Want Freedom” posters during the India vs Pakistan Champions Trophy match at Edgbaston Cricket Ground in Birmingham on June 4. Any rallies planned in the UK are required to seek police permission in advance. West Midlands Police said it will “look into” the details of the proposed rally.

“The way the UK permits anti-India activity on its soil, in Delhi people are quite perturbed about that. We are also a democratic society but we do not discuss issues that affect our friends and allies,” he had said during the launch of a new book on India-UK ties titled ‘Winning Partnership’. The Indian community in Birmingham is also mobilising to lobby local councillors and MPs to register their protest against the proposed rally.