GST rate cut for economic growth is a myth

Of late, there has been an increasing clamour to reduce GST rates on various products—such as automobiles and cement, among others—to give a boost to the economy and getting back to the higher GDP growth track. 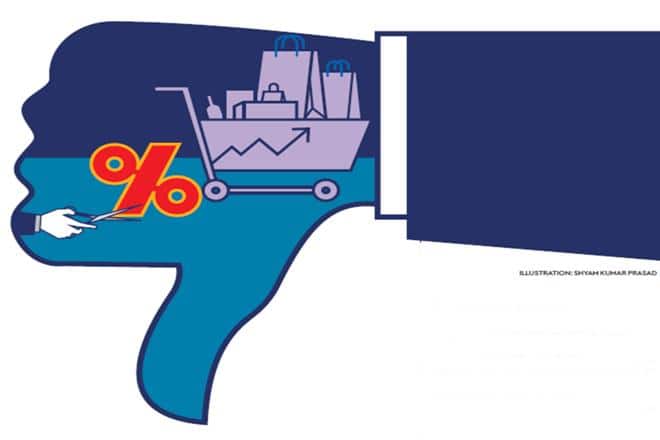 GST is a just a component of the entire consideration that is paid by the end-consumer.

Of late, there has been an increasing clamour to reduce GST rates on various products—such as automobiles and cement, among others—to give a boost to the economy and getting back to the higher GDP growth track. While the GST rate cut certainly reduces the final price in the hands of the end-consumer and does increase the probability of higher sales, it does not guarantee the same—in other words, a lower GST rate does not necessarily result in larger sales. The bigger challenge today is the slump in demand, and not high GST rates. GST is a just a component of the entire consideration that is paid by the end-consumer. Let me give an example to illustrate the point. Let’s assume that the price of a particular product is Rs 100, and the current GST rate that the said product attracts is 28%. Reducing the GST rate to 18% will bring down the price by approximately Rs 10, but what about the ability of the buyer to pay the balance Rs 82? Unless the government addresses this issue, reducing the GST rate alone won’t serve the desired purpose.

In addition, with the GST collection targets difficult to be met this fiscal, any further reduction in GST rates would push the economy towards a larger fiscal deficit, which the government has been successful in containing to a large extent.

Post the implementation of the GST in July 2017, the government has proactively reduced GST rates on umpteen numbers of goods and services, which eventually have reduced the prices of these goods and services for the end-consumer. In addition, the government has announced exemptions for certain goods and services, which has also reduced the prices, but marginally, as the tax paid on inputs, input services and capital goods used in the manufacturing of such exempted goods or provision of such exempted services becomes a cost, which ultimately has to be borne by the end-consumer. Rather than totally exempting any goods or services from the GST, it is prudent to either categorise them in the lower bracket or “zero rate” them. Zero rating of a commodity or a service results in the same mathematical conclusion as exempting it, as “zero” tax is payable upon supply of such a commodity or service in both the cases. However, the biggest plus point of zero rating over exempting is that the constituents in the value chain—such as manufacturers and traders—can claim full input tax credits, resulting into lowering of price for the final consumer. The tax-cascading effect is completely nullified, making the product less costly.

The exemption granted to products works counterproductive for the Make in India initiative of the government, as businesses tend to import and sell rather than manufacture and sell. This, definitely, can’t be the desired outcome. Time is opportune for the government to look at the zero-rating option for certain products and services for domestic consumption. We already have zero rating for export supplies, which can be extended to a select category of goods and services.

For the economy to come back to the higher growth trajectory again, consumption of goods and services in India has to increase. The solution, perhaps, lies somewhere else—away from GST rates.

– One, the quantum of export of goods has to grow substantially so as to generate revenue for Indian companies and increasing the employment rate, thereby increasing spending by Indians.

– Two, the Make in India initiative has to gather speed, and new investments, both domestic and foreign, need to be increased by further easing the norms for doing business in India.

– Three, India needs to take quick steps to take full advantage of the ongoing trade war between China and the US, by grabbing opportunities to supply goods to both the countries as they are huge markets to be serviced.

– Four, the tax and regulatory environment in the country has to be certain for businesses operating in an honest and diligent manner. Easy compliance mechanism and hassle-free working of the government’s IT mechanism can make all the difference.

– Five, the liquidity crisis haunting Indian businesses has to be addressed more aggressively than ever before. Reducing interest rates on lending is the right step in this direction, and banks need to quickly percolate that down to end-consumers.

The agility and responsiveness shown by the government to tackle the economic slowdown is commendable, and it will take a certain period of time to see the positive results. In the interim, businesses should continue to focus on what they do the best—i.e. providing quality goods and services to consumers. The effects of earth-shattering reforms such as demonetisation and the implementation of the GST, to name a few, would last for a longer period of time and, hopefully, the end-result would prove to be good for the economy in the longer run. Patience and perseverance are the two main attitudes to stay afloat in these hard times, which shall also pass.

(The author is the managing director of Acuris Advisors Pvt Ltd. Views are personal)