Inaugural flight from Sri Lanka to Kushinagar takes off; Waskaduwa relics arrive on the flight

Sources confirmed to Financial Express Online that diplomats from 12 countries were present during the ceremony. 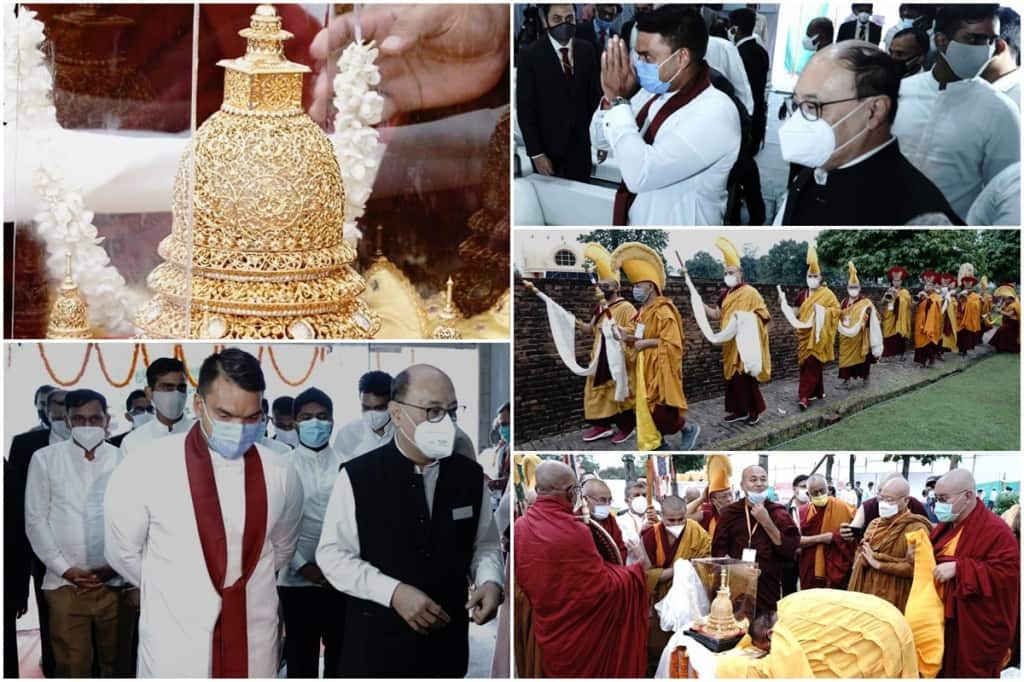 According to sources, on board the inaugural flight from Sri Lanka there was a delegation, led by Cabinet Minister Namal Rajapaksa, who is the son of Prime Minister Mahinda Rajapaksa. (Photo source: Ministry of External Affairs)

Prime Minister Narendra Modi on Wednesday (Oct 20, 2021) formally inaugurated the International Airport at Kushinagar and to mark this historic occasion an inaugural international flight from Sri Lanka landed at this airport.

Last June, the Union Cabinet had declared Kushinagar Airport as an International airport. And later in 2020 at the end of a virtual summit between the two countries, ‘Mitratva Magga’ was mentioned in the joint statement.

Also Read
Guru Nanak Jayanti: Five Gurdwaras in India associated with Guru Nanak Dev to visit on Guru Purab
The road to Gir: In search of the Asiatic lion
Tallest statues in India
Rashtrapati Bhavan to be open for public viewing for 5 days a week from Dec 1

Who was on the flight?

According to sources, on board the inaugural flight from Sri Lanka there was a delegation, led by Cabinet Minister Namal Rajapaksa, who is the son of Prime Minister Mahinda Rajapaksa. He is handling several ministerial charges including Youth & Sports, Development Coordination and Monitoring and he is also State Minister of Digital Technology and Enterprise Development.

He is accompanied by a big delegation of around 100 senior Buddhist monks, 4 State Ministers and other senior officials.

They have all arrived from Colombo on the auspicious Vap Poya Day.

The monks who have arrived are from different sects and prominent temples. They represent 22 districts of Sri Lanka. Amongst them is the senior most monk in the delegation is Most Venerable Wedaruwe Upali Anu Nayaka Thero.

It connects the people of the two countries. Accorrding to sources, the advent of Buddhism in Sri Lanka in the 3rd century BC is linked with the arrival of Prince Mahendra (also known as Arahant Mahinda Thera). Then Princess Sanghamitra (Arahant Sanghamitta Theri) arrived followed by the children of the Indian Emperor Ashoka – this was during the reign of King Devanampiya Tissa in Sri Lanka.

It is also central to the civilizational connection between the peoples of the two nations.

Because of its rich heritage, Kushinagar enjoys a pre-eminent position on the global map. This is the holy city where Buddha breathed his last and attained Mahaparirvana.

Other sites which are of Buddhist significance include: Lumbini, Sravasti, and Kapilvastu, which are not far away.

Due to heavy traffic of the devotees from several countries like Japan, Thailand, Burma, Cambodia, to Kushinagar, there was a long standing demand for an international airport.

Today’s inaugural flight is going to help in increasing traffic and a larger number of visitors to Kushinagar especially from Buddhist countries, including Sri Lanka.