From Vedic era to modern fabrics: The fascinating journey of Indian textiles

Cotton was and remains India’s favourite choice of fabric for everyday use, owing to the hot and humid climate in most parts of it. 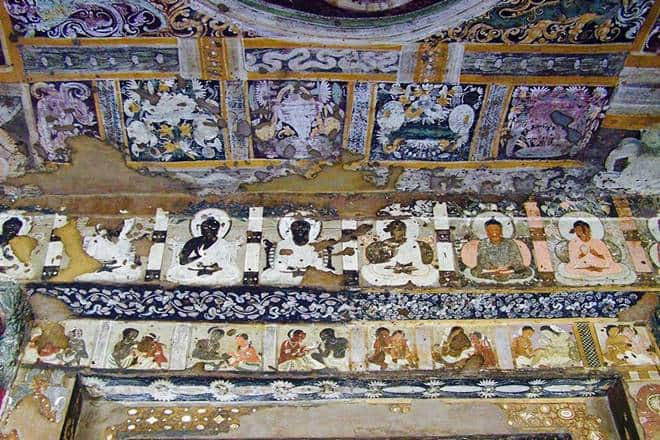 From silk strands found in jewellery excavated from Harappa and Chanhu-daro, and a cotton fragment found attached to a metal tool in Mohenjo-daro, to modern synthetic fabrics, India’s journey in the field of textile is long and chequered. Interestingly the Sanskrit word for cotton is karpasa, which is related to the Latin carbasus and Greek karpos. While there are no doubts that cotton cloth was used in the Harappan times, the Vedas however do not make any direct references to cotton, though there are innumerable references to spinning, weaving, and designing of textiles (guna, dasa, tusa, tarka, etc).

Many needles and spindles found at the Harappan sites suggest that woven clothes were worn that were embroidered. The various temple sculptures and the Ajanta wall paintings give us a beautiful insight into the textile types in vogue at that time. The Ajanta frescoes depict the various musicians, dancers, servants, and aristocracy wearing separate lower and upper garments with patterns of resist tie and dye, brocade and ikat. There are also distinct differences between the clothes worn by the rich, the poor, and the priests.

In ancient India, both stitched and unstitched lengths of cotton and silk were used for draping around the body. Men wore a turban (usnisa), a lower garment around the waists (nivi), and a shawl like upper garment draped across the shoulders (paridhan). The women too draped a cloth around their waists (candataka), and sometimes draped a vasana as their upper garment. These garments were worn keeping the climate and trends in mind, and a glance at their costumes, especially that of the women, would tell their varna, marital status, region of origin, and social status.

Cotton was and remains India’s favourite choice of fabric for everyday use, owing to the hot and humid climate in most parts of it. Therefore, it is not surprising that India was the first nation to have grown, woven, and patterned cotton fabrics. Bengal weavers with their fine cotton muslins, cotton weavers of Andhra Pradesh who created kalamkari, and Gujarat with their block printed resist-dye fabrics were the lead exporters in ancient global cotton trade with Mesopotamia, Egypt, Roman empire, and South East Asian countries.

Silk, on the other hand was kept reserved for important religious functions and other special occasions, as evident from a 5th century CE temple dedication to Surya by the silk weavers’ guild. The unstitched cloth draped around a woman’s body that we now term as the sari remains a constant and unchanged affair from ancient times. The word sari is a distortion of the Prakrit term śāḍīa, which originated from the Sanskrit word śātī or śāḍī, meaning a cloth strip. Draping a saree perfectly that would flatter one’s figure has always been an art by itself.

There are many references to the art of draping a sari perfectly in ancient Indian literature, such as satavallika or a sari with many fine folds, hastisaundaka or pleats like an elephant’s trunk, or matsyavalaka meaning pleats that take the shape of a fish tail. It is believed that the uttariya that was worn like a shawl over the shoulders, and antariya that formed the lower garment, fused sometime between 2nd century BCE and 1st century CE to form the long strip of cloth known as the śāḍī.

Among the most famous weaves of India is the fine cotton muslin that has been the leading textile export to different parts of the world in ancient and medieval times. Muslin finds mention in different old travel accounts of the Chinese, Italian, and Arabic traders and in the Arthashastra, where it is mentioned as fine cloth from Pundra and Bangla, the Bengal janapadas.

Owing to the extreme fineness of the muslin that was believed to be so fine that it would pass through a ring, the Bengal muslin was variously termed as Mulmul Khas (king’s garment) Pushpa Pattas, and Chitra Virali. It was also referred to as Shabnam (morning dew), and Abrawan (which meant running water, as when a muslin cloth was held under running water it would become almost invisible).

Muslin was used for weaving the patterned Jamdani sarees that are considered as among the finest products ever made by the Indian handloom. Hand weaving a jamdani is extremely time consuming and requires intense concentration. The muslin is woven with cotton or zari threads and commonly there are two to four large motifs (mango motifs/kolkaa) at the junction of border and pallu. The more expensive varieties show small butis (dots), or little flowers across the saree body.

When the butis are closely set they are known Hazarbuti, and when the floral motifs are connected as in a jewel setting it is known as Pannahazar. Sarees dyed a deep indigo with patterns in a lighter shade are called Neelambari. The jamdanis have an unbleached cotton base with the pattern woven on it with bleached cotton threads, which creates a beautiful light-and-shade effect.

Seeing the antiquity of Indian textiles, it is not surprising that we find ancient Indians using many terminologies associated with the textiles for defining philosophical theories and expressing general view on life. As for example, the term guna which refers to attributes, means a single thread; while terms like tantra (in the Vedas tan is a verb that refers to the weaving and stretching of textiles), sutra, prabandha, etc., all have textile terminology roots. An ancient industry; the cotton, silk, and natural dyes along with the patterning and designing have been the backbone of our textiles. It is now imperative that all Indians start taking a more informed interest, and play an active role in preservation and continuation of this ancient art of handloom industry that started from the pre-historic era and continues to this day.

Follow us on
Latest News
Govt launches scheme to support PPP projects
Weak volumes at consumer firms hint at slow recovery
Govt reverts to releasing trade data only once a month
Winter crop sowing up 16% on year
Indirect tax receipts to exceed budget estimate by Rs 50,000 crore
IndiGo’s Q2 loss widens to Rs 1,585 cr
Which is the best hybrid car to buy?
Photos
Heart-wrenching! Here is a look at Morbi and the suspension bridge that collapsed
4 days agoOctober 31, 2022
In Pictures: PM Modi in Kargil to celebrate Diwali with soldiers, says, ‘All of you have been my family for years now’
2 weeks agoOctober 24, 2022
In Pictures: PM Modi inaugurates Deepotsav in Ayodhya; World record set by lighting of over 15 lakh diyas
2 weeks agoOctober 24, 2022
Read More
×
A road trip to the two extremes of Uttarakhand
Funding question to dominate Egypt climate summit
India’s Air Emergency: Delhi, Noida and other cities across country that have lung-choking air
Third of world heritage glaciers under threat, warns UNESCO study
Gasping for clean air? Delhi implements Stage 4 GRAP – All you need to know
COP27: India to push developed countries for action on climate finance, tech