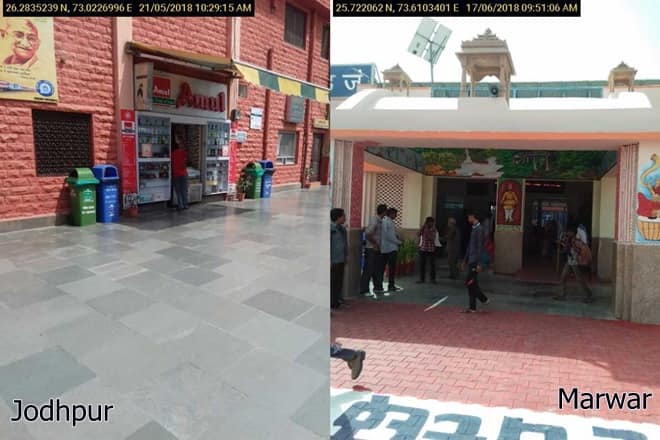 Rajasthan's Jodhpur and Marwar railway stations are the cleanest on the Indian Railways network, says a 2018 survey by the national transporter.

Since 2016, Indian Railways has been getting a third-party survey done – ranking its A1 and A category of railway stations on the basis of the cleanliness standards that are maintained. According to Indian Railways, under ‘Swachh Rail Swachh Bharat’ survey, the average cleanliness score of railway stations has gone up. Last year Andhra Pradesh’s Visakhapatnam and Punjab’s Beas had topped the list in the A1 and A category of stations respectively.

After Jodhpur, Jaipur (North-Western railway) and Tirupati (South-Central Railway) have bagged the second and third slot in the A1 category of stations. In A category, Phulera (North-Western railway) and Warangal (South-Central railway) have come second and third. According to the survey, Madhya Pradesh’s Bhopal has shown the maximum improvement in its score. In 2017, the station had scored 499.22 and in 2018 the score is 833.61 – an improvement of 334.38 points! Rajasthan’s Hanumangarh has also shown a big leap with a score of 928.78 in 2018 as against 535.42 in 2017 in the A category of railway stations. The survey of cleanest railway stations also states that in 2018, as compared to 2017 there has been an improvement of 9% in the first 100 stations. Below is the full list of Indian Railways cleanest railway stations for 2018 in the A1 and A category:

While 10 zones have shown 10-20% improvement, there is more than 20% progress in 4 zones. North-Western railway has topped the list of cleanest zones with South-Central railway coming second and East Coast railway at third. Here is the list of top zone-wise ranking for the cleanest railway stations:

The survey, conducted by Quality Council of India (QCI), has assessed 407 A1 and A category of railway stations. The four part survey is based on process evaluation, direct observation, citizen feedback and station manager interview. A team of 160 assessors have been trained for the survey and the data is collected on a real-time basis through an online platform. Approximately 1,20,000 passenger feedback has been taken into account for the survey by Indian Railways. Not only that, a central 24 by 7 control room was set up to monitor daily progress, says Indian Railways. While the station manager’s interview is qualitative in nature, the three other parameters – process evaluation, direct observation and citizen feedback – were given a weight-age of 33.33% each. A1 and A category of Indian Railways stations contribute around 80% of the total passenger revenue.

Railway Minister Piyush Goyal has said that over the past four years, Indian Railways has focused on improving cleanliness standards of its trains, toilets, platforms, waiting area and parking at stations.