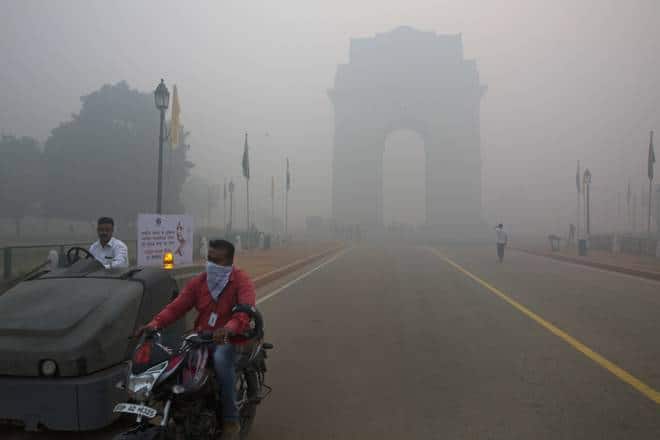 Although the study is "not comparative" as in 2017 data collected was very less — four as compared to 31 in 2018, the geographical spread of ozone is cautioning, CSE experts told IANS. (Representative image: AP)

Spike in ozone pollution has emerged as a rising threat for the already polluted National Capital Region, especially Delhi, with a new study finding “green areas more vulnerable”. Conducted by the Centre for Science and Environment (CSE), the study is based on data collected at 31 monitoring stations of Central Pollution Control Board (CPCB). It showed that the ozone or O3 has showed up as the “dominant pollutant” along with particulate matter in the daily Air Quality Index (AQI) from February to May. “During February-May, at least on 23 days, ozone has emerged as the dominant pollutant… These are the early signs of a dangerous trend,” it pointed out.

Although the study is “not comparative” as in 2017 data collected was very less — four as compared to 31 in 2018, the geographical spread of ozone is cautioning, CSE experts told IANS. A highly reactive effluent, ozone is created as oxides of nitrogen (NOx) react with heat, sunlight and other volatile gases which are mostly product of vehicular pollution and other sources. “Ozone is very harmful, especially for the patients with respiratory ailments, asthma and lung issues… chest pains, coughing, nausea, headaches are common symptoms,” Anumita Roychowdhury, executive director, research and advocacy and head of CSE, told IANS.

It can also worsen heart disease. A study from Health Effect Institute in 2017 had shown that early deaths due to ozone have jumped by 148 per cent in India. Although ozone is believed to form in highly polluted area, this study found that green regions like Dr. Karni Singh Shooting Range near Asola sanctuary were the most vulnerable.

In the shooting range, ozone levels exceeded the 8 hour average standards on 54 per cent of days in February, 87 per cent in March, 90 per cent in April, and 90 per cent in May, the study showed. Densely-populated Patparganj, R.K. Puram, Nehru Nagar, industrial areas and low income areas of Najafgarh and Sonia Vihar, were also among the most vulnerable. The study says that at such locations, ozone levels have exceeded the standards for more than 50 per cent of the days during the entire period of February to May. Besides, Gurugram in Haryana and Lutyen’s and Central Delhi are also affected by this rising threat, it pointed out.