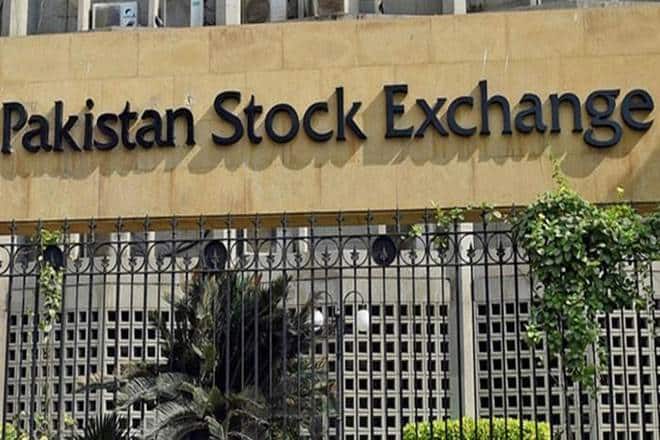 Karachi PSX Building Attack: The KSE 100 opened for trading on Monday morning at 33,939 points and soon surged closer to the 34,000 mark.

Karachi PSX Attack Highlights: Pakistan’s stock exchange building in Karachi is under attack by armed men.  According to local media four men stormed the PSX building and started indiscriminate firing. They attacked with grenade and guns. A gunbattle ensued between Pakistani security forces and the armed men.  It added that the building is in a high security zone and also has head offices of many commercial private banks.  The Pakistan State Bank is located in the premise as well as the headquarters of several national and international financial institutions. Reuters quoted Karachi police chief Ghulam Nabi Memon saying that four attackers have been killed, they had come in a silver Corolla car. It is not known as yet if any other assailant/s are at large.

China on Monday condemned the terrorist attack on the Karachi Stock Exchange and said that it supported Pakistan’s efforts to combat terrorism. Four heavily armed militants, believed to be from a banned Baloch terror group, on Monday made a brazen attempt to take over the stock exchange building in Karachi, killing four security guards and a police officer before being shot dead by security forces. Two civilians were also killed in the attack. “China condemns all forms of terrorist attacks,” Chinese Foreign Ministry spokesman Zhao Lijian told a media briefing here when asked about the attack on the Karachi Stock Exchange. “We extend our condolences over the passing of the innocent victims and sympathy to the bereaved families and the injured,” he said. “China firmly opposes terrorism in all manifestations and supports Pakistan’s efforts to combat terrorism and safeguarding national security and stability,” he said. (PTI)

The Balochistan Liberation Army (BLA) linked Majeed Brigade claimed responsibility for the attack. The group is banned in Pakistan, the UK and the US. The BLA has carried out several terrorist attacks in the past, including a suicide attack in August 2018 that targeted Chinese engineers in Balochistan, a November 2018 attack on the Chinese consulate in Karachi, and a May 2019 attack against Pearl Continental hotel in Gwadar, Balochistan. A senior official of the Counter-Terrorism Department said that one of the militants was identified as Salman, who hails from Balochistan. PSX Managing Director Farrukh Khan said that the “number of people in the compound was lower than normal today as many people are still staying home due to the COVID-19”. He said trading continued without interruption. PTI

Four heavily armed militants, believed to be from a banned Baloch terror group, on Monday made a brazen attempt to take over the Pakistan Stock Exchange building here, killing four security guards and a police officer before being shot dead by security forces. The militants, who arrived in a car, opened indiscriminate fire and lobbed grenades at the main gate of the multi-storey building situated in the city’s high-security commercial hub as they tried to storm it. Armed with automatic machine guns, grenades and explosives, they tried to enter into the compound leading to the Pakistan Stock Exchange (PSX) building through a parking lot but security forces foiled their attack within the compound itself, Deputy Superintendent of Police (South) Jamil Ahmed said. (PTI)

The building and surrounding areas have been sealed and people were evacuated from the back door. According to some media reports, the attackers were reportedly wearing clothes usually worn by police officials while they are off-duty. (PTI)

President Arif Alvi and Pime Minister Imran Khan condemned the terrorist attack and said that the country is determined to root out terrorism from its soil.
President Alvi, in a statement, said that terrorists will never succeed in their nefarious designs. Prime Minister Khan also condemned the attack and said that the entire nation is proud of the valiant personnel of the security agencies. (PTI)

A senior official of the Counter-Terrorism Department said that one of the militants was identified as Salman, who hails from the restive Baluchistan province. DSP Jamil said that none of the terrorists managed to enter the main trading hall or building and that trading did not stop even during the attack. (PTI)

The firing by militants caused panic among the people in the building. Some of the traders told television news channels that soon after the firing started, they huddled together in their offices and cabins as they were told to remain indoors. “We were scared about what would happen if these terrorists managed to enter the building”, a trader said. (PTI)

The police and Rangers’ officials arrived at the scene and killed all the four terrorists near the entrance gates, Sindh Rangers said. Four security guards and a police sub-inspector were killed in the heavy exchange of fire at the PSX compound on Karachi’s I.I. Chundrigar Road, also known as Pakistan’s Wall Street, the police said. Two civilians were also killed in the attack. (PTI)

The attack happened days after three low-intensity terror attacks were carried out in Karachi, Ghotki and Larkana in Sindh, leaving four people including two Rangers soldiers dead and a dozen injured. In the last major terror attack in Karachi in November 2018, security forces had foiled an attempt by terrorists to storm the Chinese Consulate building in the nearby Clifton area. (PTI)

The Karachi stock exchange is Pakistan’s largest and oldest stock exchange, incorporated today with the exchanges in Islamabad and Lahore.

Additional Inspector-General (IG) Sindh Ghulam Nabbi Memon said that the attackers came in a Corolla car and were stopped at the gate. They exchanged fire with security guards and two attackers were killed. He said that two other terrorists succeeded in entering the gate but were engaged in the compound of the building and were killed.

According to AP report, Rizwan Ahmend, a police official at the scene, said that after opening fire, the gunmen entered the stock exchange grounds. He said that after the attack was over, food supplies were found on the bodies of the gunmen, indicating they may have planned a long siege.

According to AP report, Rizwan Ahmend, a police official at the scene, said that after opening fire, the gunmen entered the stock exchange grounds. He said that after the attack was over, food supplies were found on the bodies of the gunmen, indicating they may have planned a long siege.

Four heavily armed militants attacked the busy Pakistan Stock Exchange building here with guns and grenades on Monday morning, killing four security guards and a police officer before being shot dead in an exchange of fire, authorities said. The militants, who arrived in a car, opened indiscriminate fire and lobbed hand grenades at the main gate of the multi-storey building situated in a high security zone as they tried to storm it, Geo News reported. Four security guards and a police sub-inspector were killed as they foiled their attempt to enter the Pakistan Stock Exchange (PSX) compound on Karachi’s I.I. Chundrigar Road, also known as Pakistan’s Wall Street, Geo News reported. One civilian was also killed. (PTI)

The Balochistan Liberation Army (BLA) linked Majeed Brigade claimed responsibility for the attack. It was also behind Pearl Continental hotel attack in Gwadar last year in which eight people were killed. (PTI)

The Baluchistan Liberation Army, which Pakistan says has found safe across the border in Afghanistan, has carried out a series of attacks in Karachi in recent years, including an attack on the Chinese Consulate that killed two people.   The Arabian Sea port of Gwadar is located in Baluchistan, and is part of China’s multi-billion dollar one-road project linking south and Central Asia to China. The Baluchistan militant group has opposed the one-road project including a highway connecting the Gwadar port to the Chinese border.

“An unfortunate incident took place at the Pakistan Stock Exchange. They (militants) made their way from our parking area and opened fire on everyone,” said Habib said. Sindh Chief Minister Murad Ali Shah condemned the attack and said that it was “akin to an attack on national security and economy”.
“Anti-state elements want to take advantage of the virus situation,” he said. (PTI)

Abid Ali Habib, Director Pakistan Stock Exchange, said that the militants stormed the Railway Ground parking area and opened fire outside the PSX ground. They made their way to the main gate of the building and stormed it after trading fire with the security guards, he said. (PTI)

Pakistan’s Dawn reported Karachi PSX Managing Director Farrukh Khan calling the attack as “serious and unfortunate”. He told Geo News that due to COVID-19 situation in Paksitan there were less number of people in the compound. He added that the gunmen were intercepted outside the entrance and only one of them succedded in entering the compound. None of them entered the trading hall or the building, Khan said.

Associated Press quoted Shazia Jehan, a police spokesman, as saying that the bomb disposal squad was also been called to the stock exchange building and was trying to clear the building of explosive devises. There were no other details and the fate of the attackers was not immediately known.

There was no immediate claim of responsibility. Pakistan has long been plagued by Islamist militant violence but attacks have become less frequent in recent years. The gunmen initially threw a grenade then opened fire on a security post outside the building. The four were killed when security forces posted there responded. (Reuters)

Strongly condemn the attack on PSX aimed at tarnishing our relentless war on terror. Have instructed the IG & security agencies to ensure that the perpetrators are caught alive & their handlers are accorded exemplary punishments. We shall protect Sindh at all costs: Imran Ismail tweets

The situation is still unfolding and management, with the help of security forces, is managing the security and controlling the situation: Pakistan Stock Exchange (PSX)  tweets.

The gunmen attacked the building, which is in a high security zone that also houses the head offices of many private banks, with grenades and guns, Karachi police chief Ghulam Nabi Memon. (Reuters)

Reuters has reported quoting police that four gunmen who attacked the Pakistani Stock Exchange building in the city of Karachi on Monday have been killed by the security forces.