Highly placed sources have confirmed to the Financial Express Online that, “Presently the ASEAN nation Malaysia is in the midst of evaluating the Request of Proposal (RfP) it had floated earlier this year for getting the light fighter jets for its Air Force.” 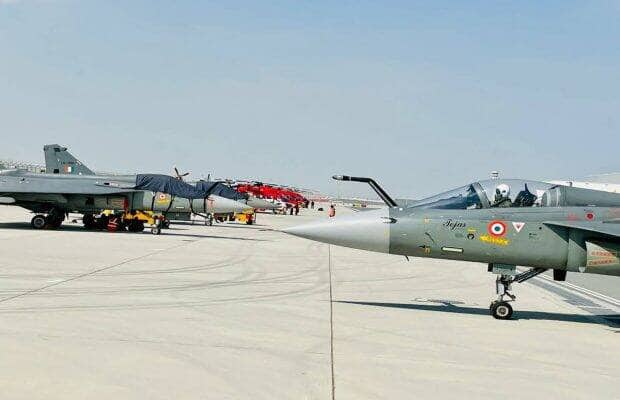 HAL’s LCA had its first international exposure was in the Bahrain International Air Show which was in 2016. (Credit: India Air Force from Dubai)

India’s indigenous Light Combat Aircraft “Tejas’’ is in the forefront of Malaysia’s requirement of 36 low cost light fighter aircraft for its Air Force.

Highly placed sources have confirmed to the Financial Express Online that, “Presently the ASEAN nation Malaysia is in the midst of evaluating the Request of Proposal (RfP) it had floated earlier this year for getting the light fighter jets for its Air Force.”

In a couple of months, the RMAF will decide which fighter jet it wants to add to its fleets.

Who all received the RfP?

Out of the five who responded to the RfP, only India’s indigenous Light Combat Aircraft (LCA) Tejas, JF-17 joint venture of China and Pakistan and FA- 50 of Korean Aerospace Industries were down selected.

India’s state-owned Hindustan Aeronautics Limited (HAL) had responded to Malaysia’s proposal. “The proposal sent from HAL is expected to make the cut as it meets all the parameters and is low cost,” a top officer explained to Financial Express Online on condition of anonymity.

Earlier this year, talking about the price of the LCA, on the sidelines of the Aero-India in Bengaluru, the HAL’s CMD R Madhavan, “Per aircraft is pegged at a vanilla price of just Rs 309 crore. However, the export version of the aircraft is going to be different than those being produced for the Indian Air Force.”

Globally, the LCA export version is the cheapest fighter jet globally and there will be extra charges for the services that HAL will provide outside India and it can be customized.

When did Malaysia reach out for LCA?

In 2019, the RMAF had expressed interest in the LCA when the aircraft had participated for the first time in the Langkawi International Maritime and Aerospace Exhibition (LIMA) in the ASEAN nation Malaysia.

HAL’s LCA had its first international exposure was in the Bahrain International Air Show which was in 2016.

The RMAF is assessing all the specifications and the features of the three down selected competitors.

This has been manufactured in India by HAL and designed by Aeronautical Development Agency (ADA) for IAF and Navy. And the IAF has recently placed an order for 83 fighters from HAL. This is according to HAL the world’s lightest supersonic fighter and has the capability to carry Beyond Visual Range Weapons (BVR), air-to-surface, air-to-air, precision-guided and standoff weapons.

An advanced Fly-by-Wire (FBW) fighter can be refueled mid-air. And it is a 4+ generation fighter and comes with a glass cockpit with Satellite aided Inertial Navigation System.

It also has the capability to carry air to ground munitions and attack system which can be used to hit targets over land or sea. With a maximum speed is supersonic at all altitudes and has ‘g’ limits +8/-3.5 and a service ceiling of 50,000 feet.

It is a single engine, multi-role fighter. According to Pakistan Air Force (PAF) it can carry highly agile imaging infrared short-range missile, beyond visual range active missile, air-to-sea missiles, anti-radiation missiles, runway penetration bombs, laser-guided weapons. JF-17 has a height of 15.5 feet, length of 49 feet, and a wingspan of 31 feet. It will have a helmet-mounted display and sight system.

The weapon systems on board the aircraft are all made in South Korea.

If and when the LCA gets exported, the programme will get the much needed boost. It will also help HAL get international recognition globally for its capabilities and the product will also get validated.