Navy’s responsibility has grown much farther than the Indian waters and abilities pitched against an adversary who too has evolved as a military super-power in this duration and is hell-bent in using the international waters to fulfill its expansionist agenda. 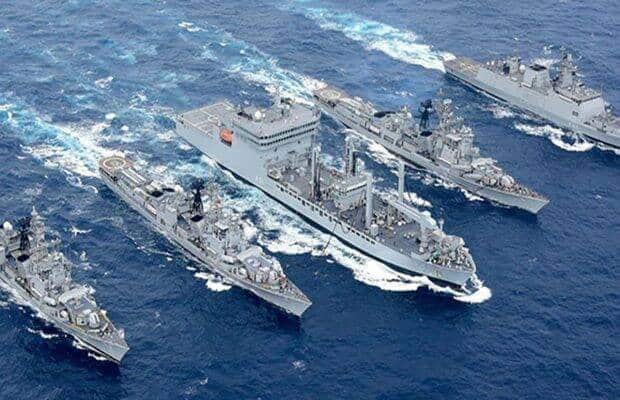 The Naval forces at sea face a complex three-dimensional threat from Air, Surface and Sub-surface offensives and, accordingly, each of the naval platforms within a Fleet play a vital role. (Photo source: Twitter/@PRO_Vizag)

While India celebrates 2021 as Swarnim Vijay Varsh to commemorate the 50th anniversary of 1971 victory, the date of 04th Dec 1971 is a treasured golden moment for Indian Naval history. On this date, Indian warships carried out one of the most ingenious and bold attacks on Pakistan to mark its place with the world navies. The success of the naval attack displayed the professionalism demonstrated by the men in white and the foresight of the naval leadership.

Over the last five decades, much has evolved in the geo-politics of the region. Today, the Indo-Pacific holds the world’s attention with a specific focus on India’s role. Navy’s responsibility has grown much farther than the Indian waters and abilities pitched against an adversary who too has evolved as a military super-power in this duration and is hell-bent in using the international waters to fulfill its expansionist agenda. The ripples of the Sino-India border skirmish at Galwan in 2020 were strongly felt in the Indo-Pacific waters, which saw the emergence of multiple collaborative and interoperable multinational Task Force deployed by the like minded nations. The new era is also seeing the advent of sturdier Indo-Pacific alliances like QUAD and AUKUS. Indian re-alignment in the Indo-Pacific for a definitive leadership position in the arena indicates emerging authoritative operational presence in the future.

Despite the dark clouds of the pandemic, last year’s border crisis saw the Navy putting in efforts at a war footing to shore up its combat capabilities through launch of an Aircraft Carrier, large warships, submarines and maritime aircrafts. In terms of maritime relationships, the peacetime activities were replaced with an urgency to establish newer ties with global naval forces, reinvigorate the old ones and cooperatively work with the world powers. For such future roles in the Indo-Pacific, the Navy’s Maritime Capability Perspective Plan (MCPP) may cater for a second Indigenous Aircraft Carrier (IAC) from a budgetary allocation point.

The Naval forces at sea face a complex three-dimensional threat from Air, Surface and Sub-surface offensives and, accordingly, each of the naval platforms within a Fleet play a vital role. The unique design of a Destroyer, Frigate, submarine or an Aircraft Carrier caters for such threat engagements to not only defend own fleet assets, but also to launch a three-pronged offensive against an adversary on surface, sub-surface or in the air. Presently, the Navy’s MCPP for the next 15 years is under review for release next year and shall highlight the 10-year Integrated Capability Development Plan (ICDP). The ICDP being prepared by DMA (Department of Military Affairs) is expected to define the Maritime Theatre Command, its administrative orientation and the underlying technologies. A Maritime Theatre Command evolved as a Cooperative Engagement Capability for the tri-services shall be a powerful response against a common adversary. The Navy is evolving INS Karwar as the key naval establishment for the Maritime Theatre Command.

With the advances made by the Chinese Navy through a robust and well-funded warship building programme, India’s maritime power and technologies too are feeling the heat. China is now aggressive in its international intent, be it diplomacy or military, and possibility of a maritime skirmish or a standoff at sea in the future requires the Indian Navy to be ever vigilant through use of surveillance techniques (like Space, UAVs, Signal intelligence etc.). The ongoing aggressive exercise by China in the South China Sea to dictate its terms on neighboring countries through the use of maritime militia forces are some of the problems which have potential to reach closer to IOR. The Chinese fishing fleet already has a serious global influence through IUU (Illegal, Unreported and Unregulated) fishing activities, with a militia-like intent and this today extends up to South Atlantic waters near South America.

Recently, the Indian Navy’s ambitions to possess 200 ships in its fleet by 2027 have been rehashed to 170 ships. With indigenous warship construction agencies like MDL and GRSE shipyard, India already has a sustainable shipbuilding capability. Indian Navy is amongst the few in the world which have the ability to construct niche naval platforms like Aircraft Carriers and submarines. It too can integrate any weapon and system sourced from multiple sources on board a locally constructed warship or as a retrofit as part of the ship’s Mid Life Update programme for keeping an edge over the adversary. With the impetus of Atmanirbhar Baharat in place, it may be expected that the indigenous component in the warships is likely to go beyond 80-85%. This shall be critical for the Indian Navy’s war fighting capabilities. However, the Indian industry needs to focus more towards delivering stringent marine quality and mature designed products for reliable continuous operations in an unforgiving sea environment.

Even though Navy’s indigenisation perspective plan has been in place for about two decades, however, the impetus to make technically advanced systems like navigational aids (Navaids), Maritime communication systems, Naval gun mounts, ship engines and gas turbines etc. is still far away from being realised. Deck launched Naval drones, Artificial Intelligence in the Naval combat, Space Surveillance, secure Private 5G network for machine-to-machine Communication are some of the other solutions Navy has been looking out for some time.

Somehow, the Industry-Academia collaborative eco-system moved in a spiral course of Lab trials delaying the naval Land-Based-Test-Site checks, let alone the tougher on board sea checks. While this techno-managerial issue may take some more time to be resolved, the development of dual use technology by Public and Private agencies can be considered a fruitful initiative for Defence indigenisation effort, for example, a Merchant ship navigation system hardened for Naval warships. Thus, a vibrant commercial ship building ancillary sector comprising manufacturers of shipboard equipment and systems may be evolved into a supplier for warship deployable technologies like Main Propulsion systems, Power Generation, Navigation and communication systems etc.

While, Indian Navy’s role is being visualised in the Indo-Pacific waters, the Navy too is preparing against attacks on the warship support infrastructure in the virtual domain. Ships, submarines and maritime aircrafts are highly dependent on the maritime communication infrastructure. Recently, DRDO handed over the EW suite ‘Shakti’ to the Indian Navy but the advances in EW suite are rapid due to the adversary’s ability to outsmart what gets deployed, thereby requiring a capability to keep revolutionising such technologies. The threat to the critical Space based navigation, surveillance and communication networks for warships is a reality today and requires building Space resilience. With such multi-dimensional threats coupled with challenges related to EW, Cyber and Space, the Navy’s task to remain effective in the Indo-Pacific requires resources in terms of fighting platforms and advanced infrastructure.

SSNs – The Weapon of Choice in Indo-Pacific

The construction of SSNs (hull classification for nuclear power attack submarines) under AUKUS is a clear indication of Indo-Pacific seeing more and more of this stealth long range underwater armament being deployed to create a serious deterrence to China and its shipping silk routes. China too possesses the SSNs exactly with the same intent in mind, and for a second-strike capability. Chinese SSNs are today sailing around in IOR waters unchallenged since these boats remain undetected even from Space based surveillance techniques. For India, while the conventional submarines played a strategic role against adversaries closer to the Indian shores and adequately leashed Pakistan’s naval power, however, in the future a robust SSN programme shall be the key to carry out an effective operation closer to the Pacific side of the Indo-Pacific.

A strong deterrence in the Indo-Pacific waters shall support India’s posture against any Chinese mis-adventure on land, air or at sea. The technologies being deployed by the multi-national naval Task Force in the Indo-Pacific are some of the best in today’s maritime world, and India cannot be left far behind. While more Naval platforms are desirable to evolve into a potent force in the Indo-Pacific, the technological solutions like Software Defined Radio (SDR), Tactical Data links, AIP (Air-independent Propulsion) for silent submarine operations, Naval version of LCA and ALH are some of the well understood war winning equipment already under development within India for many years, but now needs to be delivered to the Indian Navy in a fit and form which meets the maritime operational challenges and assist in making India a superior Naval force in the region.

Next Story
The Indian Navy- A capability based blue water force