How Lithium findings in Peru are making it advantageous for India

The average price of Lithium Carbonates in the international market is quoted at $12,500 a ton and for purer products, it can go up to the US $ 18,000 a ton. 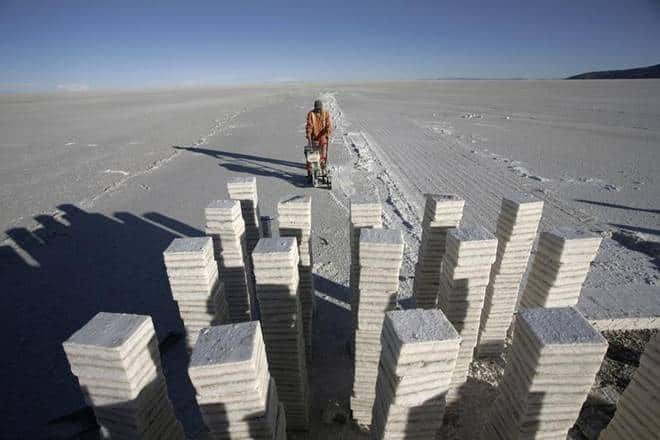 The recent discovery in the Peru Andean and Peruvian south were confirmed by 2.5 million tons of high-grade lithium resources which is seven times higher than the deposits of Bolivia and Chile. (Representational image: Reuters)

Latin America’s “Lithium Triangle” of Chile, Argentina and Bolivia have been around for a long time. But a recent discovery further north has fuelled speculation that Peru too might join the lithium party and turn the triangle into a square. The recent discovery in the Peru Andean and Peruvian south were confirmed by 2.5 million tons of high-grade lithium resources which is seven times higher than the deposits of Bolivia and Chile. This would make Peru one of the 6th largest hard rock lithium resources in the world. The average price of Lithium Carbonates in the international market is quoted at $12,500 a ton and for purer products, it can go up to the US $ 18,000 a ton.

The President of Peru Martin Vizcarra is trying to establish regulated development of the resource with estimations of approximately $500 million value per year of exports to support the continued growth of the nation’s economy. A Canadian based company &quot;Plateau Energy Metals&quot; is now seeking a partner to help develop the deposit, which is at its Falchani site in the highland region of Puno. It is believed that if and when mining starts it will be the world’s biggest lithium mine.

The lithium-ion battery market in India is expected to grow at a CAGR of 34.8% during the forecast period of 2019 – 2024. Factors such as improved capacity and the performance factor of Lithium-Ion Battery, India shifted toward the automotive industry such as Electric Vehicle and Energy Storage Systems for both Commercial and Residential applications. The increasing adoption of battery technology as well as the development of cost-effective production methods have resulted in the decline in lithium-ion battery cost which is expected to be the major drivers for the lithium-ion battery market in India.

A delegation from Khanij Bidesh India Ltd (KABIL) has already visited the Lithium Triangle countries in South America to explore opportunities in the mining of Lithium.

The discovery of Lithium in Peru was confirmed by 2.5 million tons of high-grade lithium resources which would be good opportunity for India. India can seek Joint Venture or can reserve the Lithium Stock which will help Battery manufactures setup a Giganet Batteries Factories locally under the ‘Make in India initiative for Electric Vehicle components as well as Electric Vehicle Batteries.

Geography of Lithium Deposit in Peru:

A Canadian based company “Plateau Energy Metals” discovered the Lithium in Peru and set up the two projects in the Macusani region, Posco. One is for Lithium extraction — &quot;Falchani Lithium Project and another project is for Uranium extraction called “Macusani Uranium Project”. As shown in the infographic:

Both projects are located on the Macusani plateau, 4,500 meters above sea level, contains lactiferous tuffs with a law of 3,500 to 4,000 ppm (parts per million), higher than the average of 500 ppm that is exploited in the Salar located between Chile and Bolivia.

Type of Lithium Deposit in Peru:

Lithium rich brines are formed through the chemical weathering of volcanic lithium-bearing rocks by hydrothermal fluids usually restricted to basins in areas of high evaporation, forming lithium carbonate minerals such as zabuyelite.

Lithium minerals such as spodumene, petalite, and lepidolite are found in coarse crystalline hydro-thermal pegmatites, formed by the crystallization of post magmatic fluids. Lithium containing pegmatites are rare and are generally associated with tin and tantalite. The style of lithium mineralization for the Macusani region is very different from these types of deposits, as it is interpreted to be inherent within the glass-rich acidic volcanic tuffs. At Falchani, the lithium-rich volcanic tuff unit is interpreted to be sub-aerial and the transitional Li-rich breccias are interpreted to have been deposited in a Crater Lake volcano-sedimentary environment.

Peru Lithium: This discovery of Hard Rock Peruvian Lithium in Puno will be of advantage for India. By 2021 Peru could export close to $400 – $500 Million Lithium to the world. There will be a price difference in Hard Rock Lithium from Peru and Lithium from brine resources which is from the “Lithium Triangle” Argentina, Chile, and Bolivia. The price difference is due to its extracting operational costs because in Puno there is nearly 120 million pounds of Uranium on top of the tuff and it is contained in Hard Rocks. Right now, Peru does not have laws in place to govern the handling and transportation of radioactive Uranium; this would slow the lithium extraction process. Meanwhile, the Peruvian government is reviewing its mining legislation to allow for the safe transportation of uranium.

Nearly all of Latin American lithium mine production in 2018 is estimated at 22,800t by the US Geological Survey and corresponded to brine operations in Chile (16,000t), Argentina (6,200t) and Brazil (600t). On the other hand, Bolivia, though boasting 9 million metric tons in lithium resources, has suffered from a lack of exploration, infrastructure, and technology and is seeking to tap its Lithium potential.

Chinese (Xinjiang TBEA Group-Baocheng) and German (ACI Systems GmbH) investors are interested in the lithium of Bolivia and sign a Joint Venture to build a lithium processing plant in Bolivia.

(Author is Latin America and the Caribbean Countries Market Expert. Views are personal)