Satellite images showed the spectacular eruption that took place Saturday evening, with a plume of ash, steam and gas rising like a mushroom above the blue Pacific waters. 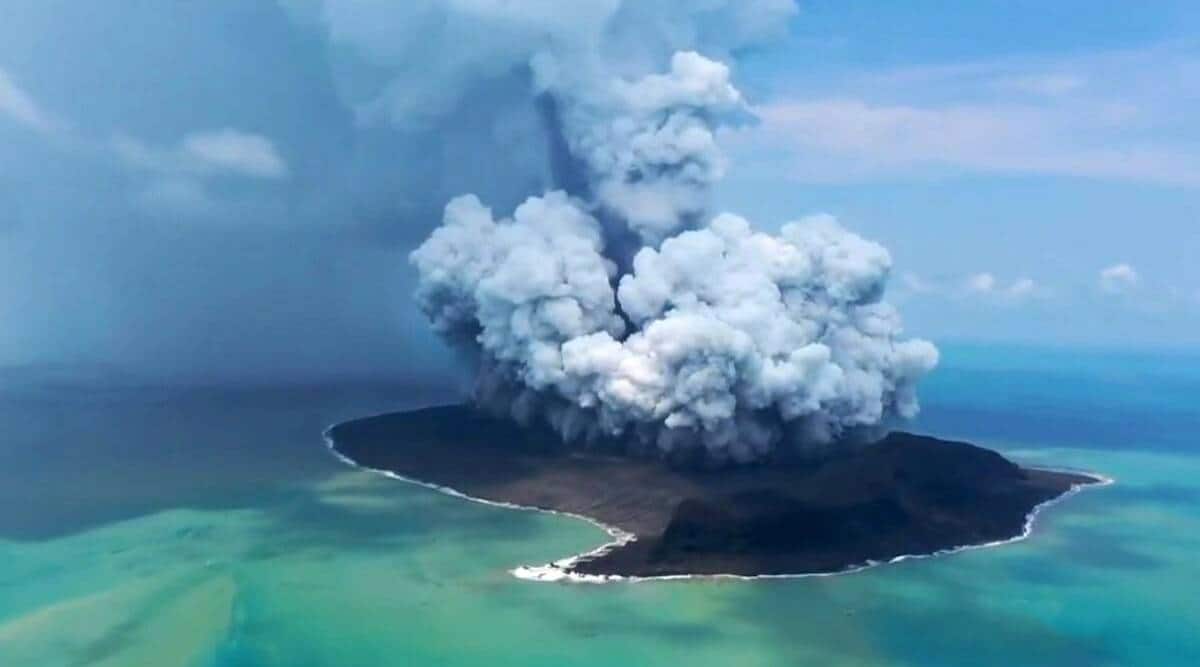 The tsunami threat around the Pacific from a huge undersea volcanic eruption began to recede Sunday, while the extent of damage to Tonga remained unclear. Satellite images showed the spectacular eruption that took place Saturday evening, with a plume of ash, steam and gas rising like a mushroom above the blue Pacific waters. A sonic boom could be heard as far away as Alaska.

In nearby Tonga it sent tsunami waves crashing across the shore and people rushing to higher ground. The eruption cut the internet to Tonga, leaving friends and family members around the world still anxiously trying to get in touch to figure out if there were any injuries and the extent of the damage. Even government websites and other official sources remained without updates.

Aid agencies said thick ash and smoke was continuing to affect Tonga’s air and water, and that authorities were asking people to wear masks and drink bottled water. Dave Snider, the tsunami warning coordinator for the National Tsunami Warning Center in Palmer, Alaska, said it was very unusual for a volcanic eruption to affect an entire ocean basin, and the spectacle was both “humbling and scary.”

The tsunami waves caused damage to boats as far away as New Zealand and Santa Cruz, California, but did not appear to cause any widespread damage. Snider said he anticipated the tsunami situation in the U.S. and elsewhere to continue improving.

Tsunami advisories were earlier issued for Japan, Hawaii, Alaska and the U.S. Pacific coast. The U.S. Geological Survey estimated the eruption caused the equivalent of a magnitude 5.8 earthquake. Scientists said tsunamis generated by volcanoes rather than earthquakes are relatively rare.

The Tonga Meteorological Services said a tsunami warning was declared for all of the archipelago, and data from the Pacific tsunami center said waves of 80 centimeters (2.7 feet) were detected. Rachel Afeaki-Taumoepeau, who chairs the New Zealand Tonga Business Council, said she hoped the relatively low level of the tsunami waves would have allowed most people to get to safety, although she worried about those living on islands closest to the volcano. She said she hadn’t yet been able to contact her friends and family in Tonga.

“We are praying that the damage is just to infrastructure and people were able to get to higher land,” she said. Tonga gets its internet via an undersea cable from Suva, Fiji, which presumably was damaged. All internet connectivity with Tonga was lost at about 6:40 p.m. local time, said Doug Madory, director of internet analysis for the network intelligence firm Kentik.

The Fiji-based Islands Business news site reported that a convoy of police and military troops evacuated Tonga’s King Tupou VI from his palace near the shore. He was among the many residents who headed for higher ground. On Tonga, home to about 105,000 people, video posted to social media showed large waves washing ashore in coastal areas and swirling around homes, a church and other buildings.

New Zealand’s military said it was monitoring the situation and remained on standby, ready to assist if asked.
In Hawaii, the Pacific Tsunami Warning Center reported waves that measured half a meter (1.6 feet) in Nawiliwili, Kauai and 80 centimeters (2.7 feet) in Hanalei.

Earth imaging company Planet Labs PBC had watched the island in recent days after a new volcanic vent there began erupting in late December. Satellite images captured by the company show how drastically the volcano had shaped the area, creating a growing island off Tonga.

“The surface area of the island appears to have expanded by nearly 45% due to ashfall,” Planet Labs said days before the latest activity. Following Saturday’s eruption, residents in Hawaii, Alaska and along the U.S. Pacific coast were advised to move away from the coastline to higher ground and to pay attention to specific instructions from their local emergency management officials, said Snider.

“We don’t issue an advisory for this length of coastline as we’ve done – I’m not sure when the last time was – but it really isn’t an everyday experience” Snider said.

Savannah Peterson watched in shock as the water rose several feet in a matter of minutes in front of her oceanfront house in Pacifica, California, just south of San Francisco.

“It came up so fast, and a few minutes after that it was down again. It was nuts to see that happen so quickly,” she said. “I’ve never had water come all the way up to my front door, and today it did.” Police rescued a surfer whose surfboard broke in powerful waves off San Francisco