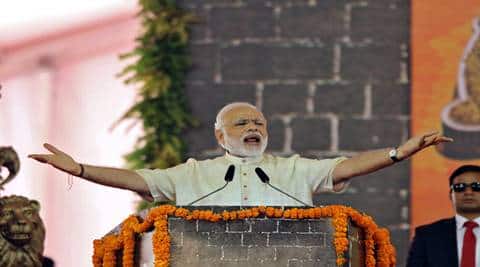 Prime Minister Narendra Modi said that the Char Dham project would offer employment opportunities for the people of Uttarakhand. (Reuters)

Prime Minister Narendra Modi on Tuesday launched the 900-km-long Char Dham Highway Development Programme in Dehradun with an investment of Rs 12,000 crore. The road once constructed will ensure round-the-year, hassle free travel to these shrines and the famous Sikh shrine Hemkund Saheb also. Addressing a public rally at the city’s Parade Ground, the Prime Minister hit out at the Opposition saying people had issues when he was working for the nation. “You have overwhelmed me; I can see so many people and I am happy that women have joined this rally in large numbers,” PM said. We take a look at the top 5 takeaways from his speech:

1. Modi said that the Char Dham project would offer employment opportunities for the people of Uttarakhand. “The inauguration of Char Dham project is a tribute to those who lost their lives during Uttarakhand flash floods. I assure you that whenever you will come for Kedarnath, Badrinath yatra, you will remember this government and Nitin ji like Shravan is remembered,” added Modi. PM said that he could clearly see that Uttarakhand wanted development. Tourism is the biggest asset of Uttarakhand. “If facilities are provided, then which family in the country would not want to come here? Hasty conception of schemes may be able to give short term political gains but the gains for people will be limited,” Modi said.

2. PM said that the Central government took the initiative to electrify villages within 1000 days. Keeping that in mind, over 12,000 villages have already been electrified.

3. Modi said that in three years his government has worked in giving gas connections to 5 crore poor families.

4. Indirectly targeting the Congress party, Modi said that our jawans were demanding OROP for the last 40 years, the party that ruled the country then never thought of their demands. “I salute my Army jawans. Rs 6600 crore have already been disbursed under OROP and rest will also be disbursed at the earliest. We were clear that from Day 1, our jawans must get their due; We said OROP will be a reality,” he said.

5. PM Modi said that in one stroke fake notes, terrorism, human trafficking, drug mafia were dealt with after demonetisation announcement on November 8. “We had said that corrupt people will be punished and now this is happening; This is a ‘Safai Abhiyaan’ and people of India have helped me. I know you have faced a lot of inconvenience but despite that the nation came forward to fight against corruption,” PM Modi added.