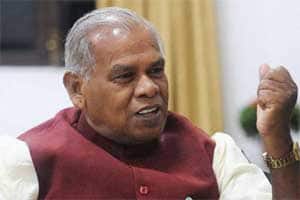 Bharatiya Janata Party (BJP) MLAs were unanimous in extending support to embattled Bihar Chief Minister Jitan Ram Manjhi during the floor test on February 20 though the saffron party is likely take a formal decision on the matter on Thursday.

According to sources, at a closed-door BJP Legislature Party meeting held in Patna this evening, party MLAs were unanimous in extending support to Manjhi, a Mahadalit.

All party MLAs felt that the way former Chief Minister Nitish Kumar has “humiliated a Mahadalit” he should be taught a lesson, a senior party leader said.

The BJP legislators will also meet tomorrow to discuss their strategy during the floor test and a final decision on the matter is likely by tomorrow evening ahead of Friday’s floor test.

Meanwhile, BJP tore into former chief minister Nitish Kumar, who is hoping a comeback, saying in his quest for power Kumar has lost trust of dalits by insulting Manjhi.

BJP’s leader of opposition in Bihar Assembly Nand Kishore Yadav said, “In his quest for Chief Minister’s post, Kumar has lost the trust of dalits by insulting Jitan Ram Manjhi. The dalit community is feeling cheated by Nitish. They are completely disillusioned with him.”

He said, barring a few hanging around Nitish in the hope of ministerial berths, no one from the community wants to hear his name.

“This is one major reason behind his frustration. Nitish Kumar is caught in a dilemma – neither can he see the future nor can he see the path of return,” Yadav said, in a statement.

Yadav said Kumar initially thought that by joining hands with Lalu Prasad he would have numbers to ‘browbeat’ and oust the dalit Chief Minister. He added that Kumar had planned everything meticulously and had issued directions, but Manjhi showed him that democracy runs according to constitutional processes.

“Shocked at the turn of events, Kumar started shooting in all directions. Sometimes he targets the Governor and sometimes BJP and other times Jitan Ram Manjhi,” he said.

Yadav said the non-BJP parties are “despondent” and are even giving communal colour to a robbery at a religious place.

He said not only Bihar but the entire country was watching the leaders who took political advantage of dalits and then stabbed them in the back.