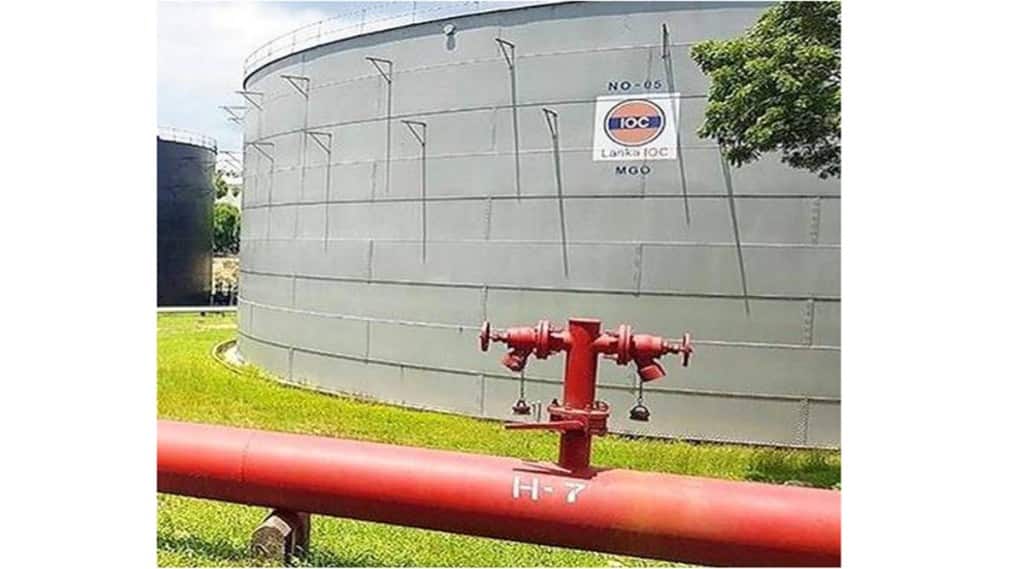 The CPC and the Lanka IOC will have 51% and 49% stake on the jointly developed 61 tanks respectively. (Photo source: PTI)

The Government of India and Sri Lanka have reached an agreement through diplomatic talks to jointly develop 61 tanks out of the 99 tanks in the Trincomalee oil tank farm. Accordingly, the Sri Lankan cabinet at the meeting held on 3 January 2022 approved the proposal presented by Sri Lankan Minister of Energy Udaya Gammanpilato implement the development project by a company named Trinco Petroleum Terminal Pvt. Ltd. The Sri Lankan cabinet has also approved the decision to allocate 24 oil tanks for the business activities of the Ceylon Petroleum Corporation (CPC) and to allocate 14 tanks of the Lower Oil Tank Complex already in use by the Lanka Indian Oil Corporation (IOC) for the company’s business activities. The CPC and the Lanka IOC will have 51% and 49% stake on the jointly developed 61 tanks respectively.

The China Bay tank farm in Trincomalee of Sri Lanka was built by the British in the 1930s to supply fuel to Royal Navy ships during the Second World War. The farm initially had 101 tanks built within an area of 850 acres. Two of the tanks were destroyed by aircraft. The government of Sri Lanka had taken over the farm from the British in 1957. In 1987, India and Sri Lanka agreed to jointly restore and operate the Trincomalee oil tank farm through an exchange of letters annexed with the India-Sri Lanka agreement signed between the two countries.

In 2003, Sri Lanka leased out the oil tank farm to India, for the upgradation and commissioning of 99 tanks in it for 35 years by signing an agreement. Lanka IOC, a subsidiary of Indian Oil Corporation (IOC), was set up for the implementation of the project. Since then, the company is using 14 of the 99 tanks and regularly paying US$100,000 annual fees. Developmental work has been done by the LIOC for the effective use of the 14 oil tanks. The 85 tanks remain undeveloped and unworthy of use. No agreement could be reached to jointly develop the tanks. India faced lots of opposition within Sri Lanka in this regard. The opponents of the 2003 agreement consider the deal incomplete as the lease agreement between the state-run CPC and the LIOC, (one of the prerequisites of the 2003 deal), was not signed. There had been calls for taking back the leased-out tanks from India. In 2013, the Mahinda Rajapaksa administration had expressed its intention to take over the farm from the LIOC and convert it to a profitable venture with foreign investment.

Indian Prime Minister (PM) Narendra Modiduring his visit to the island in March 2015 raised the issue with the newly formed National Unity Government in Sri Lanka and promised to help to turn Trincomalee into a regional petroleum hub. A ten-member task force was formed to work out the business plan for harnessing the full potential of the tank farm. In 2017, both countries reached a “political agreement” to jointly develop the upper tank farm. The MoU on Economic Package signed between India and Sri Lanka during the Sri Lankan PM Ranil Wickremesinghe’s visit to India in April 2017 did include the project on joint developments of the farm. However, no legal agreement could be signed in this regard given the massive protest against the deal in Sri Lanka. Rajapaksas led Sri Lanka Padajuna Peramuna Party (SLPP), then in opposition, also opposed the deal considering it as a deal to sell the country’s strategic asset to India.

After coming into power in 2020, the SLPP-led Sri Lankan Government entered into fresh negotiation with India on the issue. The latest agreement between the two countries was reached after reviewing the existing agreements mentioned above regarding the China Bay oil tank farm and diplomatic negotiations for more than 16 months. Sri Lankan Energy Minister has termed the outcome of the successful negotiation a “historic victory”. However, nationalist parties like Janatha Vimukthi Peramuna (JVP) have expressed their dissatisfaction for allowing the Lanka IOC to continue to operate the 14 tanks instead of taking them over. JVP has expressed its intention to join the trade union protest against the current deal. Earlier some of the CPC officials also had issues with the LIOC operating the lower tanks.

It seems despite the cabinet approval, the latest deal on the development of the tank farmis likely to face roadblocks at the time of signing a formal legal agreement between the two countries. It would be rational on the part of the Government of Sri Lanka to sort out the issues with the domestic opponents before entering into a formal agreement with the Government of India and the LIOC to avoid a situation that compels the authority to cancel the signed agreement.

(The author is Research Analyst, Manohar Parrikar Institute for Defence Studies and Analyses. Views expressed are personal and do not reflect the official position or policy of Financial Express Online. Reproducing this content without permission is prohibited).