Geoeconomics underpins the tensions in the Taiwan Strait, specifically the joust to dominate tomorrow’s tech 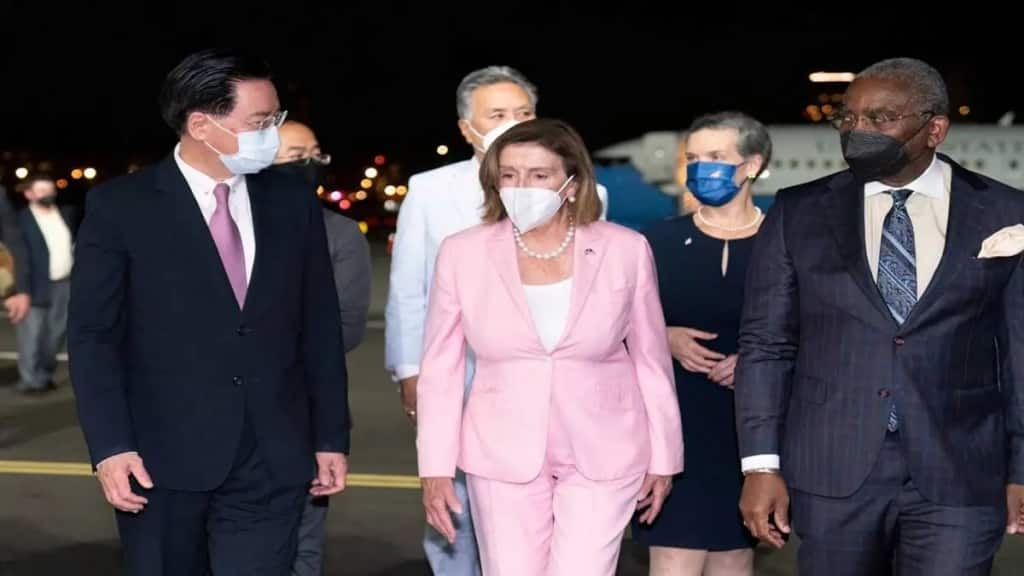 Then, on Sunday, another US Congressional delegation arrived in Taiwan, and by Monday, a furious China had announced fresh military drills targeting the island nation.

After demonstrating its military prowess for days, China announced Wednesday last week that its military drills in response to US House Speaker Nancy Pelosi’s visit to Taiwan were over. The People’s Liberation Army’s statement, though, promised to keep conducting “regular combat readiness patrols” in the Taiwan Strait. Days of live-fire exercises followed by anti-submarine attacks and sea raid rehearsals were all part of China’s angry response to Pelosi’s visit. In its first white paper on Taiwan released last week in more than two decades, Beijing underlined that it will “forced to take drastic measures to respond to the provocation of separatist elements or external forces should they ever cross our red lines.” Taiwan for its part wants to maintain the status quo “which is that Taiwan has no jurisdiction over mainland China and the People’s Republic of China (CCP) has no jurisdiction over Taiwan.”

Then, on Sunday, another US Congressional delegation arrived in Taiwan, and by Monday, a furious China had announced fresh military drills targeting the island nation.

Also Read
Scrap the export duty on steel
Inside track by Coomi Kapoor: From Sukhbir Badal-Amit Shah meeting to Shinde’s talks with Raj Thackeray
Why management is both art and science
Ringside view: End of an era as Roger Federer walks into hallowed sunset

The US lawmakers’ visit, Pelosi’s and the one that followed, has brought Taiwan back to global spotlight at a time when the US-China tensions are getting sharper by the day, across a range of issues from trade & technology to geopolitics and geo-economics. China’s aggression has been so much a part of its diplomatic style in the last few years that most nations have been at its receiving end, even as the issue of Taiwan had become marginal on the global stage at a time of multiple disruptions. For the US, it has been a challenge to manage its ties with its putative rival as escalatory rhetoric and assertive behaviour by China has made it difficult to sustain a normal major-power relationship between a rising and an established power. So, even as China simulates an attack on Taiwan during its military show of force, for Taiwan, it is a belated recognition by the world, of the challenges it faces on a daily basis from a bellicose China.

Also Read| EXPLAINER: Why Nancy Pelosi went to Taiwan, and why China’s angry

While the geostrategic dimension of this conflict is now well established and understood around the world, it is the geoeconomic dimension that is more likely to shape the trajectory of this conflict in the short- to medium term. Economic ties between China and Taiwan are producing interesting political realities. In the past, Beijing had tried to use its economic attraction as a way to entice Taiwan into its fold. Growing economic ties between Taiwan and China would eventually make the whole debate about reunification moot, the argument went. And indeed there was a time when it looked as if economic interdependence and a rational engagement between the two actors would lead to the ordinary Taiwanese accepting the mainland Chinese role when it came to their island’s future. But then Xi Jinping happened. Xi had no time to watch how things might unfold. His foreign policy outlook shunned the logic of “hiding your strength and biding your time”, and Taiwan became a casualty. As he has become more bellicose, a growing majority in Taiwan are growing wary of the mainland, considering themselves “Taiwanese” and not “Chinese.” While Beijing is trying its best to make a case that it is a small group of politicians who are at fault—the Taiwan separatist forces—more and more Taiwanese now oppose any sort of unification with China.

Another tactic that China is hoping would work is to put economic pressure on Taiwan. After Pelosi’s visit, China imposed several trade restrictions, including import bans on fish and fruit as well as an export ban on natural sand. Taiwan laughed off these restrictions as Beijing went for those sectors that would have little effect on the overall economic relationship between the two areas. Taiwan’s ministry of finance confidently asserted that it expected “very little chance of China imposing stricter economic sanctions on Taiwanese businesses due to our highly reliant economic relations.” Bilateral trade between the two hovered around $328 billion in 2021.

What Beijing has tried to do is to target Taiwanese business leaders directly, in an attempt to convince them to make their decisions wisely given the inherent risks of losing the Chinese mainland. From tourism to fish and fruit businesses, despite suffering economic losses, Taiwanese businesses have shown great resilience, and China has not achieved its objectives. Now as geopolitical tensions have risen once again dramatically, it is becoming evident that purely economic decisions won’t be helpful in navigating this churn in the Taiwan Strait, and that doing business with China is becoming riskier by the day.

It is also clear that China knows that Taiwan has to be treated with kid gloves in certain sectors as reflected in Beijing not targeting Taiwanese manufacturing exports, particularly semiconductors. With the Taiwan Semiconductor Manufacturing Company (TSMC) making roughly 90% of the world’s most advanced semiconductors, the island nation is a critical node in the global chip supply chain. Any disruption will have deleterious effects for the Chinese economy along with the rest of the world. Moreover, China would want a potent Taiwanese semiconductor industry in case of an eventual reunification.

This tussle over the semiconductor industry is now shaping the broader US-China rivalry, which is as much about the future of technology as it is about the maritime routes in the Indo-Pacific. It is not without significance that, during her visit to Taiwan, Pelosi met with TSMC chairman Mark Liu, underlining the critical role of the semiconductors in ensuring American economic prosperity and national security. The US today is keen to maintain its lead in this sector and is looking to enhance its domestic manufacturing base with the TSMC building a $12-billion chips manufacturing plant in Arizona and the US Congress recently passing the Chips and Science Act to boost semiconductor manufacturing in the US and improve competitiveness with China.

The Taiwan issue, therefore, is about much more than simply a historical debate about the nature of relationship between Beijing and Taipei. It is also about the future of global economic order and the concomitant great power engagement. It is important that more nations give it the importance it deserves so that they can work together to defend peace, democracy as well as economic prosperity in the Indo-Pacific and beyond.