Aayi Mandapam: Post-independence the Indian administration of Pondicherry decided to respect the memorial by making it the official emblem. 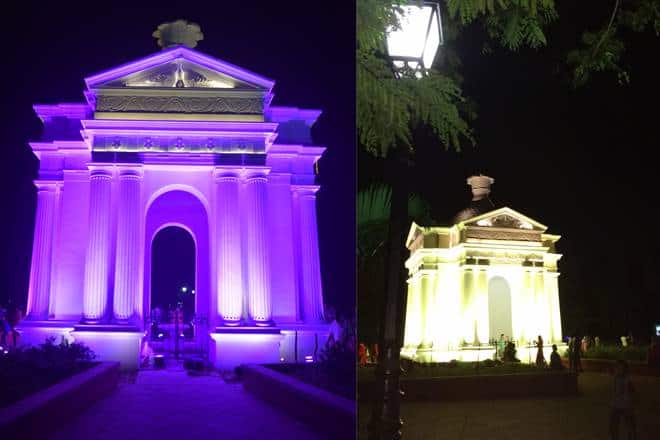 Regarded as Puducherry’s official emblem, the elegant ivory white pavilion adorned by the fleur-de-lis, the formal royal arms of France was built during the reign of Napolean III, by Louis Gurre in 1854 in honour of ‘Aayi’ for her selfless service to people.

Aayi Mandapam in Pondicherry stands among the swaying tall palms surrounded by blooming flowers and grassy expanse of Bharathi Park, a few minutes from the popular Promenade in the parts known as White Town of Pondicherry. At first glance, the stoic monument resembles memorial arched gateway of European architecture. Regarded as Puducherry’s official emblem, the elegant ivory white pavilion adorned by the fleur-de-lis, the formal royal arms of France was built during the reign of Napolean III, by Louis Gurre in 1854 in honour of ‘Aayi’ for her selfless service to people.

Also Read
Air India, Go First Republic Day Sale: Check discount offers on flights and routes; Details here
Tatkal passport now issued within a day, get a normal passport in just 11 days! Check details
Experience authentic India this Republic Day with a stay at heritage properties
In 2023, Indians can travel to these countries without a visa; Check the list

A plaque in the park elaborates on the folklore of Aayi. As the story goes, that once the powerful monarch Krishnadevaraya of Vijaynagar Empire in 16th century, was visiting the now Pondicherry region when he chanced upon a beautiful majestic structure lit with oil lamps and embellished with fine carvings. He was impressed by the beauty and the peaceful aura that it exuded. Mistaking it for a grand temple, the king fell to his knees in reverence. The onlookers were stunned at the king’s gesture. It was then that the King came to know that what he thought as the temple was instead home to a temple dancer or ‘Devdasi’ Aayi.

Enraged and feeling humiliated, the king ordered the home of the courtesan to be demolished. Devastated and heartbroken, Aayi begged for mercy and offered to tear down the house herself. She requested the king to allow her to dig a pond at that spot for townspeople. The king having calmed down relented. Aayi stayed true to her word and constructed a freshwater tank where her house once stood.

Many years later, post a treaty between British and French, the latter regained control of Pondicherry in 1765. Extensive construction with governor’s house, churches, residential colony, library and more was done to create the White Town of Pondicherry, the French Quarters. It was around the mid 19th century that the colonizers faced a severe water crisis. The engineer Pierre Eugene Lamairesse while scouting for alternate water source discovered the freshwater tank constructed by Aayi at Muthurayapalayam. He got canals dug from the pond to a central location in the French quarters. When king Napolean III, heard the age-old legend of Aayi’s sacrifice and generosity, he ordered a memorial to be built in her remembrance.

The structure, built-in Greek-Roman architectural style, stood proudly amidst important buildings in the then town square of the French colony. Today the memorial is enclosed within the Bharathi Park. The monument that has a fountain and a pediment with a sculpture of Aayi and a pot, is lit up in the evenings. The park and its benches become a resting spot during the hot afternoons for school kids and tired visitors.

Post-independence the Indian administration of Pondicherry decided to respect the memorial by making it the official emblem. The monument built-in memory of a humble courtesan is proof enough that kings may come and go but it is the acts of kindness that leave a lasting impression on the memories for ages to come.