Tracing the history of ‘Chai’, and Indian and Chinese claims on the culture of drinking tea

Not to be outdone, Indians believe that tea originated in India and the leaves were carried to China by Bodhidharma in 6th c. BCE, an Indian Buddhist monk who founded Zen Buddhism. 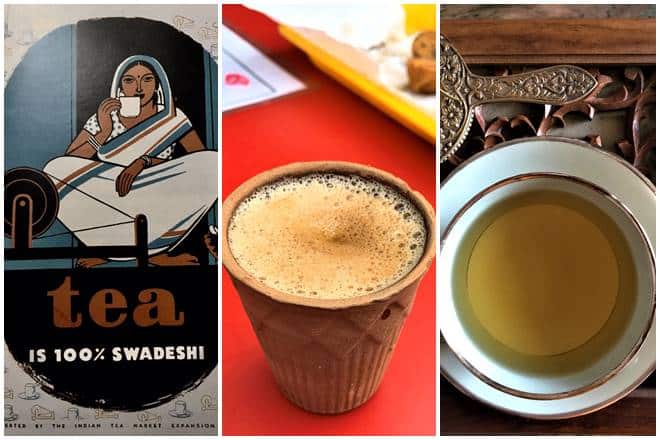 During the British rule, it was discovered that the Singpho tribe who lived in Assam drank a variation of the Chinese tea for many centuries.

Come, let us have some tea and continue to talk about happy things ~ Chaim Pot.

So, where did the culture of drinking tea start?

While India is now well-known for the high-quality tea it produces, and the innumerable cups of chai that Indians drink, the habit of drinking tea as a regular beverage did not originate here. Historically, Indian addiction to chai is a more recent phenomenon when the British introduced the habit of drinking endless cups of tea, simply for trade benefits. It is generally believed that tea drinking originated in China and is said to have been in regular use there, originally as a medicine and later as a beverage.

However, there are debates on the exact area where tea was first grown in China, and claims vary from Sichuan province, to Yunnan province in south China, to the regions where Tibet, Indo-Burma, and Southwest China meet. The practice of drinking tea as a medicine likely began in Yunnan, during the reign of the Shang Dynasty (1500 BC–1046 BCE). As a medicinal drink, tea leaves were boiled with different herbs, seeds, and other plant parts, and this concoction was served to the patient. Later people living in Sichuan (during the Zhou dynasty reign ~1122 to 256 BCE), first discovered the art of making tea, by simply brewing tea leaves in hot water, without adding any medicinal herbs.

The popular legend runs that the famous Chinese Emperor, Shen Nung (believed to have lived around 2737 BCE) was once resting under a tea tree (Camellia sinensis), and his servant served him boiled water to drink. The servant being a careless one, had not bothered to remove the tea leaves that had accidentally fallen in the boiling water. The brewed tea leaves gave the water a distinct flavour. The emperor found the drink refreshing, and thus was born the first cup of tea ever drunk. While tea drinking had started during the reign of the Shang dynasty in some parts of China, it was the Tang Dynasty (618-906 CE) that popularised tea in the whole of China. A book titled as ‘Tea Classic’ that eulogised this drink was written by Lu Yu (760-762 CE), under the patronage of the Tangs, and is considered the first known monograph on tea.

Not to be outdone, Indians believe that tea originated in India and the leaves were carried to China by Bodhidharma in 6th c. BCE, an Indian Buddhist monk who founded Zen Buddhism. Another parallel story, and a rather gory one, that supports the Indian origin of tea, says that while meditating, Bodhidharma had cut off his eyelids to avoid falling asleep. The severed eyelids then fell on the ground and transformed themselves into the first tea plants! Interestingly, during the British rule, it was discovered that the Singpho tribe who lived in Assam drank a variation of the Chinese tea for many centuries.

The Indian variety had larger leaves and produced a stronger liquor, unlike the Chinese ones with smaller leaves that gave a weaker liquor with floral flavour.

The west remained happily oblivious of this magic potion until 1557, when the first Portuguese ships arrived in China. Soon the Portuguese discovered the new elixir named tea, and by 1610, both Portuguese and Dutch were importing boxes of tea leaves to Europe. When the Portuguese arrived in China, the modern way of brewing processed tea leaves was already in vogue; hence, Europe learned and adopted this method of tea making. Prior to this, the Chinese whisked dry and crushed green leaves in hot water and made their brew (8th -12th c. CE).

This particular way of making tea, along with some green tea seeds, were carried to Japan by a Japanese monk sometime in the 8th c. CE, and soon Japan started the tea drinking ritual, which became famous as the Japanese tea ceremony. While the Portuguese and Dutch ships were trading tea from both China and Japan, the English didn’t take any interest in it. Their focus was more on controlling the spice trade and defeating other colonial powers operating in this route. Furthermore, after being defeated by the Dutch, the English East India  Company was limited to the Indian mainland, and trading with the Chinese came to a stop. Thus, while the English agents knew of this popular drink, England did not see tea until the Dutch merchants took it to the London markets in 1657. The English East India Company finally managed to import its first packet of tea in 1669.

The British, however, did not take to tea very easily. As tea consignments trickled in, trade-in tea remained slow. A major reason for the slow development was the high prices. In 1658, a pound of tea cost £26, and when compared with the annual earnings of an average worker of that time which varied from £2 to £6, it certainly appears exorbitant! Clearly only the Dukes and Earls could afford the new drink.

It was Catherine of Braganza, a Portuguese princess who married King Charles II in 1662, turned tea drinking into a fashion statement of England. Since the Portuguese had been importing tea for many years the princess had grown up drinking tea, and she had carried with her a casket full of tea. Her love for this drink soon turned it into a craze among the wealthy, that later spread among the general populace too. However, tea was still expensive owing to high taxes, and inevitably tea business soon went into the hands of the ‘tea mafia’ that were largely made up of unscrupulous thugs and pirates. Tea smuggling was rampant, and often people were fooled with “British tea” that did not have any tea leaves but were often a toxic mix of dried crushed leaves of other plants, or buds of elders, ash tree and hawthorn. Often the spurious “tea” mix had harsh chemicals and even cattle dung mixed in them. Finally, at the end of the 18th century, once the high taxes were cut down, tea became affordable to all and sundry.

While India had known tea as a medicinal drink from ancient times (almost parallels to China), it was never in regular use as a beverage. After exporting tea to Portugal for some years, Japan decided to close its doors to the world and isolate itself, so the global tea trade went entirely into the hands of the Chinese. While China was happy to trade, it refused to give up the secrets of tea cultivation.

To break the monopoly, British spies tried entering Chinese tea industry, and there are stories of a Scottish botanist growing pigtails and infiltrating as a Chinese trader, and stealing tea plants. The stolen Chinese plants were planted in Darjeeling, and the latter not only thrived in Darjeeling, but produced a new flavour owing to changes in altitude and soil. Tea plantations started in Darjeeling in the 1850s, and soon the world tasted the ‘Champagne of teas’: Darjeeling tea. With the production of Darjeeling tea, and wide-scale marketing by the British, the Chinese tea monopoly was completely broken down, and soon Indian teas captured both the market and the imagination of global tea drinkers; and thereafter, as we all know, the rest is history.