Renuka Sugars cut to default by Icra on debt 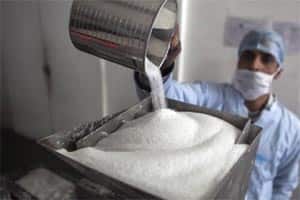 The overall sugar production in the country till end- April in the 2015-16 crop year (October-September) was at 24.6 million tonnes, down 11 per cent from a year earlier. (Reuters)

Shree Renuka Sugars has been downgraded to default with rating agency Icra citing delays in debt servicing, reports Devangi Gandhi in Mumbai. Icra has downgraded close to Rs 6,500 crore of the company’s various debt instruments to “ICRA D” or a default rating.

These instruments include term loans, fund-based limits as well as non-fund-based limits. Prior to the downgrades, Icra had assigned long-term and short-term ratings of “BB” and “A4”.

Shree Renuka reported a net loss of Rs 505.5 crore in the nine months to December at a consolidated level and its total debt at the end of March was Rs 8,897 crore.

“The downgrade of ratings takes into account the delays in debt servicing by the company in recent past owing to stretched liquidity position arising from inadequate accruals from core operations and high debt repayment obligations,” the agency in a ratings revision it put up on its website.

It noted that a joint lenders’ forum has been formed to review the Karnataka-based company’s refinancing package wherein it has sought additional term loans. While most banks have approved the package, the timely disbursement of the same would remain important from a credit perspective. Icra has also taken note of the sizeable amount of corporate guarantees extended by Shree Renuka Sugars to its subsidiaries.

According to Icra, depressed sugar prices prevalent during the sugar year (SY) 2015 (October 2014-September 2015) coupled with the high sugarcane costs have widened Shree Renuka’s PBIT loss in the sugar business to R210.8 crore for the first nine months of 2015-16, against a loss of Rs 84.4 crore for the nine months to December 2015. With a high interest burden along with forex losses, the company’s net loss too rose sharply.

Icra said that the ratings continue to remain impacted by the weak consolidated financial profile of the company as poor weather conditions in Brazil and increased liabilities on US dollar-denominated loans due to depreciation of the Brazilian currency have affected the company’s plans of turning around its Brazilian subsidiaries in the sugar business.

Apart from the exposure to price fluctuations for the company’s trading business, the ratings also take into account the risks arising out of the inherent cyclicality in the sugar business, exposure to agro-climatic risks and vulnerability to regulatory policies.