Firing yet another salvo at ally BJP, Shiv Sena today taunted it over the issue of supporting Bihar Chief Minister Jitan Ram… 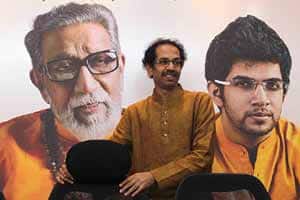 Needling BJP, its ally in Maharashtra Shiv Sena today said the Bihar elections results "denotes decline of a leader" in an apparent reference to Prime Minister Narendra Modi and asserted that it will bring in a "new" turn in the country's politics.

Firing yet another salvo at ally BJP, Shiv Sena today taunted it over the issue of supporting Bihar Chief Minister Jitan Ram Manjhi saying backing him would be a “sin” as it would be an endorsement of “black era in politics”.

“Nobody should indulge in this sin of backing for political interest someone who has publicly said he accepts commission,” an editorial in Sena mouthpiece Saamana said.

“Nitish Kumar has the backing of 130 legislators and yet he (Manjhi) is trying to get BJP support. BJP is pitting Manjhi against Nitish Kumar,” it said.

Earlier, the Shiv Sena had said the “broomâ€”wielding” AAP had reduced the BJP to “dirt” in the Delhi elections and virtually demanded that Modi accept the blame for it.

Manjhi while addressing a function, had said, “engineers and technocrats used to escalate cost of bridge construction projects and used to pay some share to contractors and some to me even.”

He later said he uttered “symbolic” things to highlight that money used to come to even such a high level but actually he did not take money as CM.

The sharp exchanges between BJP and Shiv Sena have brought to the fore the underlying unease in their relations despite a patch-up.

The two had parted ways before the Maharashtra Assembly election. Contesting separately, BJP emerged as the single largest party in the assembly but fell short of a majority, while Sena finished second. Shiv Sena briefly occupied the main Opposition’s space in the House before realigning with BJP and joining the government.