Former Navy Chief Admiral Arun Prakash highlights the need for proactive policy decisions citing the same example of the MV Bhakti Sagar and outlining the challenges in the backdrop of the security pact signed by India-Qatar. The situation also hurts the credibility of maritime power projection. 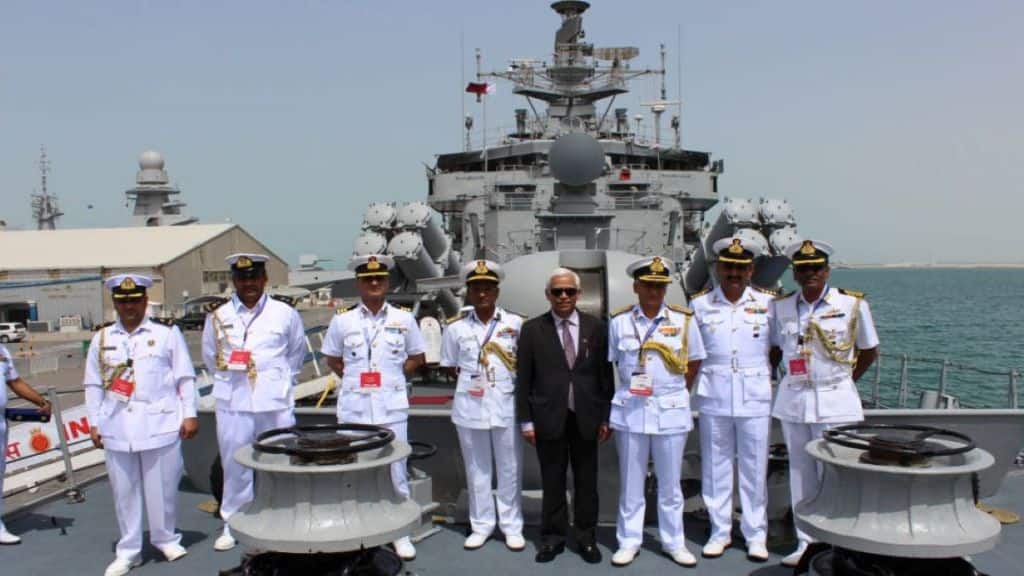 India has emerged as a regional power and net security provider in the Indo-Pacific, said Union Defence Minister Rajnath Singh. The timing is good as India inducts its first indigenously designed aircraft carrier ‘Vikrant’ which puts India in the elite league with five other countries– US, UK, Russia, China and France for such advanced capabilities. On that emphatic tone, Indian Navy is positioning as a security provider for the regional commons, assuming the role of a security stabiliser in the Indian Ocean Region (IOR) and as a source of positive deterrence. While the concept of Indo-Pacific further stretches the range and roles of Indian Navy far beyond the Region.

The detention of eight former Indian naval officers by the Qatari government hurts that power projection. India is seeking consular access from the Qatari government to eight former naval officers who were detained in Doha in since 30 August. In fact, whole crew of 9 members in total includes a retired Omani military officer, squadron leader Khamis Al Ajmi. While the Khamis Al Ajmi was released on 18 November, the all-Indian crew members (remaining 8 naval officers) are still languishing in custody.

While the cause of detention is still not clear and the diplomatic efforts are underway, Former Navy Chief Adm. Arun Prakash (Retd) throws some light on the possibilities based on past experiences.

Drawing similarities with a case of an Indian owned and manned dhow, MV Bhakti Sagar, hijacked by Somali pirates in 2006, the former Navy chief recalled, “While Mumbai was proceeding with dispatch, a heated debate and discussion raged in the Cabinet Secretary’s office about the advisability of sending a warship on this mission. At the end of these deliberations, the MEA sent a written note to NHQ posing a set of rhetorical questions, which came as a revelation about the diffidence, timidity and lack of resolve that prevails at the policy-making levels.”

As Adm. Prakash recalls–The essence of the note, which took a full 24 hours to traverse the corridors of South Block, was contained in one plaintive query which said: “Will we sail a destroyer every time an Indian national is in trouble anywhere?” The navy’s emphatic response: “Yes of course; if we have one available!” A few days later, the ship-owner paid ransom to the pirates, and 21 Indian citizens came home.

Speaking of the current situation and the officers detailed in Qatar MEA spokesperson Arindam Bagchi said earlier this week that “We are pursuing the matter with the Qatar authorities. We have requested another round of consular access and we are following up with Qatari authorities.”

In this context, Admiral Arun Prakash highlights the need for proactive policy decisions citing the same example of the MV Bhakti Sagar, “since intense diplomatic activity was underway, to negotiate release of the Indian crew. Nautical wisdom said that a powerful warship, looming unseen over the horizon, could open any number of options; not all of them military. And best of all, if nothing worked out, she could just come home, still unheard and unseen.”

The current matter lies with the Ministry of External Affairs and their response has been in line with the standard protocols in such cases. While the two instances are slightly different in nature, they do poses similar challenges in the backdrop of our maritime prowess. The detention of the former naval officers by the Qatari governments offers some hint of ambiguity. What further exacerbates the situation is the fact that India and Qatar have signed a security pact. What does the security pact tell us?

Since the early 2000s, India-Qatar bi-lateral relations have been improving and the efforts have made to take India-Qatar ties beyond energy security and diaspora. Both the countries started working on Defence cooperation, which aimed to reach some sort of framework under the security pact.

The 2008 agreement laid out security framework which included maritime training, joint-exercise and sending troops in case Qatar is threatened. It was the resurgence of India’s maritime approach that India is ready to play a greater maritime role in the Indian Ocean Region and the waters up to the Gulf of Aden. The pact opened the scope of further collaboration with Qatar in defence and space, including intelligence sharing and manpower training. In fact, it continued under Prime Minister Narendra Modi, who held multiple high-profile meetings with Emir of Qatar Sheikh Tamim bin Hamad al-Thani.

These naval officers were detained by the State Security Bureau (SSB) which is the intelligence agency of Qatar. And what is so astonishing is about this case is the even during the many video conferences with the family members of the detainees along the members of the Indian Embassy in Qatar, officials could not ascertain as why the Qatar intelligence agency had arrested.

In that context, the current situation in Qatar poses serious question as under that framework, those sailors must be repatriated and then put on trails. That equally applies for Qatar if such a situation arises. Besides, as Admiral Arun puts it, “It further erodes our projection of our maritime trade and security. The incident is quite linked to the MEA’s outreach and Indian Navy’s formidable image.”

In fact, this was highlighted again by Prime Minister Modi under the SAGAR (Security and Growth for All in the Region) that India will cooperate with multiple partners to ensure economic growth & security in the region while tackling threats.

And that demands a bold response and answers from the Qatari government on detaining former Commanders and officers of the Indian Navy.