Given how finance minister P Chidambaram is cutting down on Plan expenditure in a big way, and how this could be the target of further cuts in FY14, the usual critics have come out protesting. Cutting Plan expenditure, the argument goes, robs the country of vital investmentsor of expenditure in critical areas like education or infrastructureand therefore slows down the overall growth potential of the economy. 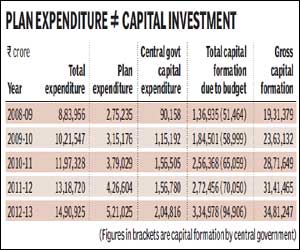 Cutting any expenditure, including digging a ditch and then filling it up, lets be clear, has a contractionary impact on the economy in the first round. What matters, however, is what happens finally. If the contraction in government spending leads to a significant cut in the fiscal deficitand assuming, as is the case, that the bulk of expenditure is for consumption and not investmentthats beneficial since it lowers overall borrowing costs in the economy.

A few examples should suffice to make this clear:

The government, Centre and states, spend R1 lakh per student in college each yearthats a whopping R90,000 crore a year. But if private colleges were encouraged instead of being discouraged, surely this expenditure could be reduced Not only is it difficult for private colleges to get accredited, the government is making it difficult for even distance-education players to survive.

Such are the size of leakages in government subsidy programmes, according to analysis by Surjit Bhalla (http://goo.gl/WHLfE), while the government needs to spend just 0.5% of GDP to fully remove poverty, it ends up spending six times as muchand we still have 22% of the population thats below the poverty line.

According to Commission for Agriculture Costs and Prices (CACP) chief Ashok Gulati, the extra buffer stocks held by FCIaround three times the levels requiredalone costs the government around 1% of GDP.

Oil under-recoveries, to cite one specific subsidy, are likely to add up to around R1,67,300 crore in FY13. Apart from what it does to the exchequer and to boost oil consumptionfirms use diesel in furnaces instead of inferior furnace oil since it is cheaperthis is important from the point of view of capital formation. Of the 9% of GDP that is invested by the public sector which includes government, around 45% comes from PSUsso, to the extent the oil under-recoveries have to be funded by PSUs, theres that much less for them to invest.

The most important thing to keep in mind, of course, is that under a fourth of total investment in India comes from the public sector. Around a third comes from the corporate sector today, but this proportion was as high as 45% in FY08 when corporate investments were 17.3% of GDP as compared to the overall investment level of 38% of GDP by all types of investors in the countrygovernment, households and the private corporate sector. It is this fall in India Incs investment that is responsible for the slow 5% GDP growth today. This is what the finance minister needs to fix. Apart from what it does to the deficit, trying to bump up government investments a bit is neither here nor there.