Fault lines in the Eurasian heartland

For a nation that was seen as the bellwether of stability in Central Asia, the unrest was emblematic of flaring-up of dormant fault-lines that had largely been kept in check by the safety net of a resource rich economy. 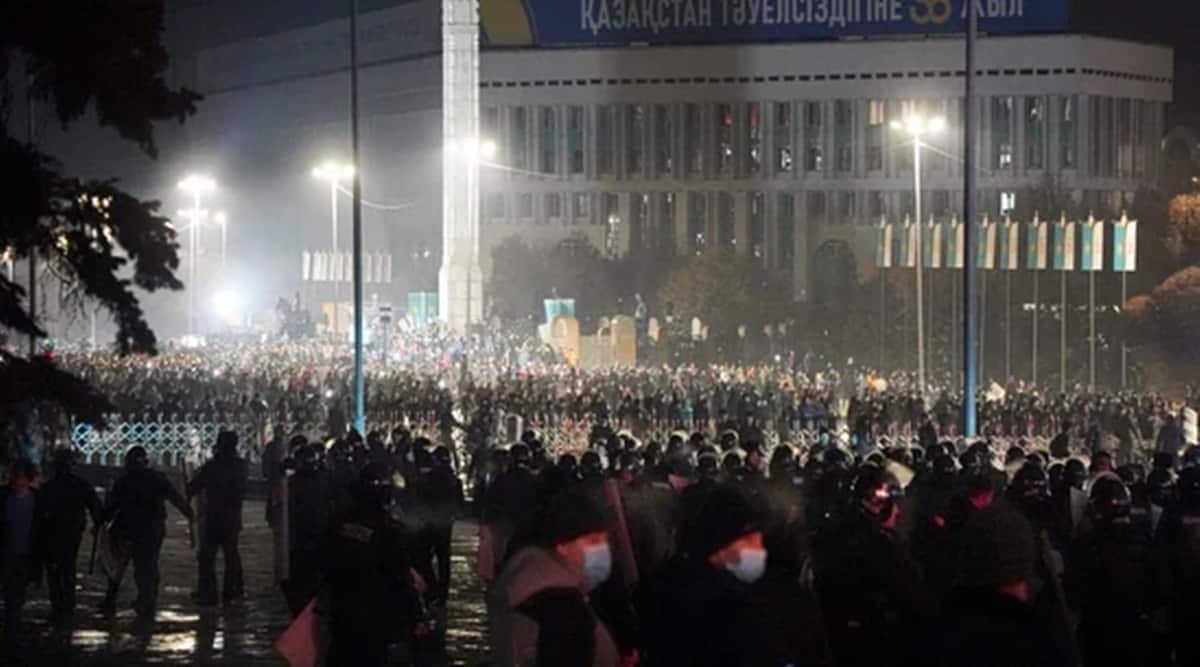 The protests highlighted the fraying of the long-established social contract between the Kazakh state and its people. (Photo source: AP)

Normalcy appears to be returning in Kazakhstan after days of unprecedented upheaval. For a nation that was seen as the bellwether of stability in Central Asia, the unrest was emblematic of flaring-up of dormant fault-lines that had largely been kept in check by the safety net of a resource rich economy. More importantly, it laid bare the inherent geo-political tussle underway in Eurasia with Russia strengthening its credentials as a pivotal actor in the Eurasian landscape. Going forward, this is likely to have implications stretching beyond Kazakhstan.

Also Read
Thousands queue for petrol, gas in Sri Lanka amid warnings of food shortages
Russia Ukraine War (Day 85) — What is the status now? Key Developments you should know about
Appointment of Ranil Wickremesinghe as Sri Lanka PM: Solution to or part of Political Stalemate?
Alliance is the ray of hope for smaller Western countries

The protests highlighted the fraying of the long-established social contract between the Kazakh state and its people. The trade-off between curtailments of political participation and economic progress appeared increasingly tenuous amidst a prolonged economic slowdown. Lack of inclusive growth, rising inflation and unemployment, a rural versus urban divide and large-scale corruption appeared to have undermined the Kazakh model. The Covid-19 pandemic likely exacerbated the friction.

Crucially, the ruling dispensation appeared to be out of sync with these festering sentiments. The model of managed democracy, which has prevented the rise of credible opposition, seemed ineffective in addressing people’s grievances.

It was, therefore, unsurprising that the protestors turned their ire on their Elbasy or Father of the Nation Nursultan Nazarbayev. While the former President and architect of the existing Kazakh political model had given-up power in a well-orchestrated transition in 2019, he was perceived to be continuing to pull the power strings, albeit behind the scenes.

Visuals of his statue being taken down perhaps mark a new era in Kazakh politics. Nazarbayev’s embattled loyalist successor President Tokayev has started to increasingly dissociate himself from the previous regime. He also appears to be sending signals to tackle the shadow boxing taking place among the old ruling elite over distribution of resources.

The jury, however, is still out. Time will tell if this is a genuine volte face or a tactical move to stabilise the flare-up.

In the Kazakh episode, Russia’s alacrity in organising the rapid deployment of Collective Security Treaty Organisation (CSTO) peacekeepers in support of the ruling regime stood out. Incidentally, this Russia-led Eurasian military organisation’s show of support was its first in its more than two decade long existence. It had previously rebuffed calls for intervention during a similar domestic unrest in Kyrgyzstan in 2010.

Russia’s alacrity can likely be attributed to its attempts at making a comeback in Eurasia. Over the last few years, there has been a major recalibration of Russia’s foreign policy amidst its standoff with the West. This has seen Moscow change course from previously seeking integration with the West to now focusing on its Greater Eurasia project. The broad contours of this new policy involve reinforcing Russia’s ties with it’s near abroad i.e. the Eurasian heartland, and it’s “Pivot towards Asia” underpinning it. The underlying goal of this shift is for Russia to strengthen its claims of being a global pole.

However, for Russia, Eurasia has emerged as a key theatre of Great Power contestation. This has seen Russia increasingly challenged by the US and China in its traditional “sphere of influence”. Washington’s containment strategy of Moscow rests in isolating Russia in its neighbourhood. In this endeavour, Colour Revolutions in the post-Soviet space have seemingly become a vital part of the US toolkit.

Therefore, Russia’s calculus in driving CSTO’s rapid intervention in Kazakhstan would likely have been aimed at preventing an encore of the 2014 Maidan protests in Ukraine. In this light, tactically, a collective Eurasian peacekeeping force stood a better chance of local acceptance than a Russian one. Presumably, President Tokayev’s SOS to the CSTO was an indication of imminent collapse of the Kazakh state apparatus.

This CSTO intervention is likely a signal to the West of the Kremlin’s ability to rise up to the challenge of tackling instability in its backyard, at a time when the West has increasingly seen Russia through the lens of a declining power.

Meanwhilein Central Asia, Russia has been forced to cede space to China. Moscow’s lack of economic competitiveness had long facilitated Beijing’s rise as the go-to economic partner of the region. Today, China’s footprints in Central Asia are expanding to cover strategic and military sectors – previously seen as Russia’s exclusive domain. Pax Sinica can, therefore, undermine Russia’s comeback in Eurasia. Paradoxically, however, Russia and China have closed ranks to insulate their neighbouring region of Central Asia from purported US machinations. This is anchored in their shared animosity towards the US.

Arguably, Russia’s influence in Eurasia will shape its credentials as a Great Power. Russia appears to be leveraging its fraternal ties, and economic and military linkages anchored in the Russia-led Eurasian Economic Union (EEU) and CSTO, to reinstate its status as the numero uno player on the Eurasian chessboard.

In this context, Kazakhstan remains a key pillar of Russia’s Eurasian outreach. The two neighbours share strong economic, military, political and social ties. However, the fly in the ointment has been Astana’s multi-aligned foreign policy. This has enabled Kazakhstan to productively engage with the West while maintaining ties with Moscow. The large Western investments in the Kazakh energy sector with the US labelling Astana a “valued partner” are a reflection of this strategy. However, the CSTO intervention to prop up the Tokayev regime could lead to a closer Kazakh embrace of Russia.

Crucially, an upheaval similar to Kazakhstan could play out in the lesser developed Central Asian countries. These nations have faced serious economic headwinds which have called into question the stability of their respective ruling regimes. Faced with a Hobson’s choice, these regimes may, like Kazakhstan, lean on Russia to weather their storm.

This may present itself as an opportunity as well as a challenge to Russia. Moscow’s litmus test would be to balance the stability of Central Asia without alienating the local population of these independent states. Failure could lead to Russia being the lightning rod for fuelling more discontentments in Eurasia.

Closer home, the ongoing instability remains a matter of concern given that Kazakhstan remains India’s largest trade and investment partner in the region. Moreover, these recent events unfold at a time when New Delhi has sought to energise its ties with not just Astana but also its extended neighbourhood in Central Asia based on India’s historical linkages, its positive and benign image, and overlapping security and economic interests. Concomitantly, India fits in well with Central Asia’s calculus of strengthening the region’s scope for strategic autonomy. Needless to say, staying engaged is in India and the region’s interest.

(The author is Associate Fellow at Manohar Parrikar Institute for Defence Studies and Analyses. Views expressed are personal and do not reflect the official position or policy of Financial Express Online. Reproducing this content without permission is prohibited).