Indian Space Research Organisation (ISRO) is well aware that it lacks a rich experience with crewed flights, and intends sending Vyommitra (Sanskrit for ‘space friend’), a Humanoid prototype, for the Gaganyaan missions. 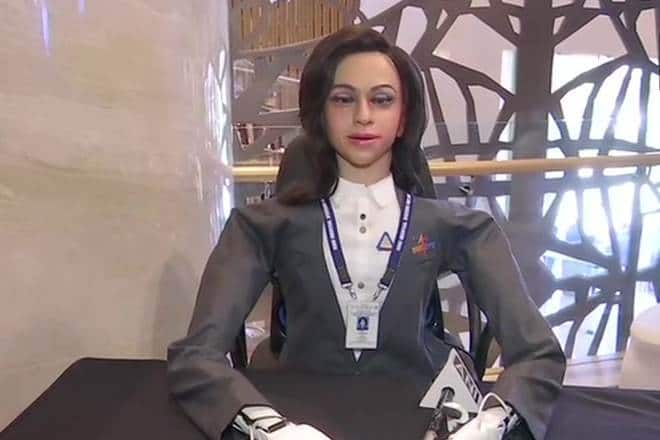 ISRO's half-humanoid Vyomamitra will be on the test flight for Gaganyaan mission.

The world has come to understand that the Artificial Intelligence-embedded humanoid shall be the key feature of any future space exploration. Towards this, all efforts are being made to evolve technologies for bots handling the Navigation, pre-programmed experiments and other regular tasks onboard spacecraft or planetary landing or research. This robot shall complement the efforts of an astronaut, and provide essential crew support, leaving the astronauts the time to focus on other crucial tasks. This shall help send spacecraft deeper into space with Cobot to assist and provide company during interplanetary travel.

Indian Space Research Organisation (ISRO) is well aware that it lacks a rich experience with crewed flights, and intends sending Vyommitra (Sanskrit for ‘space friend’), a Humanoid prototype, for the Gaganyaan missions.

According to the ISRO Chairman K Sivan, “The humanoid which is almost ready will be like a human and will be able to do whatever a human can do.”

The US Space Agency National Aeronautics and Space Administration (NASA) has invested huge resources in the development of Robots and Rovers for Space exploration.  And these robots shall be used to aid, augment or substitute an astronaut so that difficult or mundane tasks such as repairs in hazardous environments procedures.

In fact, for exploration on Mars, NASA is launching a rover to search for signs of existence of habitable conditions in the past. And it also has multiple programs like ‘Robonaut’ as a joint project with US Defence research institution DARPA to create a humanoid robot for equivalent to human actions.

The US space agency runs a dedicated programme for testing various space robots in different areas in the desert in an effort to get new ideas for rovers, spacewalks and ground support.

According to Milind Kulshreshtha, C4I expert, “NASA has recently manufactured a Mars Helicopter, which will be the first aircraft to fly on another planet. It is considered to be a high-risk but high-reward technology. It is a twin-rotor, solar-powered helicopter. The helicopter will remain encapsulated after landing but shall deploy on command. In case the helicopter works as designed, future Mars missions shall include an advanced version of such helicopters for an aerial dimension to their explorations.”

“NASA is focusing on a new generation of small, smart, versatile robotic landers to achieve scientific and exploration goals on the surface of the moon and other inhabitable celestial bodies. Transactions on space robots between NASA and ISRO will help in reducing risks in the developmental phases itself,” the C4I expert explains.

According to a joint statement issued at the end of bilateral talks between Prime Minister Narendra Modi and President Donald Trump, both ISRO and NASA are working towards launching in 2022 a joint mission with the world’s first dual-frequency Synthetic Aperture Radar satellite.

Both agencies are working together in the field of  Earth observation, Mars and planetary exploration, helio-physics, human spaceflight, and commercial space cooperation.