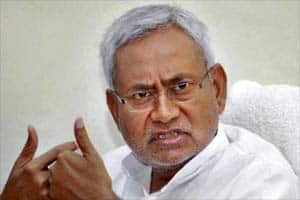 JD(U) leader Nitish Kumar today targeted Prime Minister Narendra Modi for “encouraging” horse-trading in Bihar and alleged that the Centre “pressured” the Governor into giving the incumbent Chief Minister a long time to prove his majority so that MLAs could be “lured”.

In a frontal attack on Modi, Kumar said the “script” to what is happening in Bihar was written after Chief Minister Jitan Ram Manjhi met the Prime Minister here on February 8.

“All kinds of allurement are being made to MLAs. They are being offered ministerial chairs and even BJP tickets,” Kumar told reporters.

Kumar said “license for horse-trading” was issued in Delhi and alleged BJP’s involvement. Asked if money is also being offered, he said this is being talked about everywhere.

BJP on its part rejected as malicious and baseless the allegations by its friend-turned-foe and asserted it had nothing to do with JD(U)’s internal crisis.

It accused Kumar of indulging in “dirty politics” for his attack on constitutional chairs and said he should restrain his “craving for power” till February 20 when Governor Kesari Nath Tripathi has asked Manjhi to prove his majority.

Though Kumar refrained from naming Modi, Kumar made his target clear. “I am talking about the same person you are mentioning again and again,” he said when asked if he was attacking the Prime Minister.

What BJP was doing was a direct attack on democratic and constitutional norms and people of Bihar will teach it a lesson similar to what voters in Delhi did, Kumar said, referring to the party’s debacle in Delhi Assembly polls. Bihar will go to polls later this year.

“First a delay (by Governor) in taking decision and then giving him (Manjhi) more time show that it is being done according to the script written in Delhi and to give adequate time to encourage horse-trading. This has been decided at the highest level.” Kumar said before leaving for Patna.

Kumar had yesterday paraded about 130 MLAs and met President Pranab Mukherjee demanding his intervention. Leaders from RJD, Congress, Samajwadi Party and the Left had accompanied him during the meeting.

Kumar said BJP’s strategy was to save the Manjhi government by any means and then get President’s rule imposed in Bihar.

Claiming that Manjhi enjoyed support of only 12 MLAs as BJP had still not declared its support to him, he said the saffron party was playing “caste card”, in an apparent reference to the Chief Minister’s Maha-Dalit background.

“BJP is fully involved in the exercise. And this is not the first time they are doing something like this in Bihar. The indulged in horse-trading during Rajya Sabha elections as well but failed,” he said.

Union Telecom Minister and senior BJP leader from Bihar Ravi Shankar Prasad took on Kumar over his allegations and said, “I totally reject his baseless and malicious charge. It is unfortunate and shameful. BJP has nothing to do with this internal strife of JD(U).”

BJP spokesperson Shahnawaz Hussain said, “Nitish Kumar is indulging in dirty politics by pointing fingers at a constitutional authority. He is in the habit of criticising everybody. It seems he is too eager and is in a hurry to get power.”