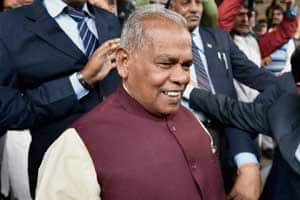 The power struggle in Bihar JD(U) appeared headed for a full-fledged confrontation in the Assembly as Nitish Kumar prepared to stake claim today to form a government while Chief Minister Jitan Ram Manjhi yesterday ruled out his resignation before a trial of strength.

Nitish will meet Governor Kesari Nath Tripathi at 1.30 PM, Raj Bhavan sources said after JD(U) submitted letters of support of the RJD, Congress, CPI and an independent MLA claiming that Nitish had the backing of 130 MLAs in a 243-member House.

Bihar Speaker Uday Narayan Chaudhary too recognised Nitish Kumar as the new leader JD(U)LP leader and the party said it had replaced Manjhi after he refused to step down.

Manjhi, who was in the national capital in connection with the meeting of Niti Ayog, met Prime Minister Narendra Modi amid speculation that BJP could play a crucial role in a possible trial of strength.

Meanwhile, the Governor accepted resignation of 20 cabinet Ministers loyal to Nitish, who put in their papers on Saturday.

Insisting that he was still the Chief Minister, Manjhi, who is a mahadalit, said he will step down only after he fails to prove majority on the floor of the House.

He said BJP was welcome to support him but claimed he did not discusses politics in his meeting with Modi but told him to support Bihar in its “current” situation so that it could develop.

“Assembly is the place to prove majority. I have already written to the Governor for convening Budget Session of the Assembly. I will prove my majority on February 19 or 20. If Nitish Kumar has numbers, why is he unduly worried. If they prove I do not have numbers, I will step down,” he told reporters soon after meeting Modi.

He termed the actions of Nitish-led faction as “illegal and unconstitutional”.

Attacking Nitish, he said the former Bihar Chief Minister was happy as long as he was a “rubber stamp” but when his “self-respect woke up” and he began acting independently, he began plotting his removal.

“I know he is a good man. But he cannot live without power. He thought I am a Maha-Dalit and of average intellect. For 34-35 years in politics, I played a dumb as leaders with background like me were either killed or sidelined if they dared to speak,” he said, claiming he drew a bigger line than Kumar in “social engineering” which caused envy.

Playing Dalit card, Manjhi said it was time for all political parties to decide if they stood for the poor and Maha-Dalit and said he would expand his Cabinet soon.

“I can have 16-17 more Cabinet ministers and as many Parliamentary Secretaries,” he said, aiming to lure more MLAs to his side. He said he may have two Deputy-Chief Ministers and one of them will be “certainly” a Muslim.

Initiating the process of government formation under Nitish, state JD(U) president Bashistha Narayan Singh accompanied by leaders of RJD, Congress, CPI and an independent MLA visited Raj Bhawan and submitted the letters of support. The Governor will arrive here today.

“Nitish Kumar will himself meet the governor tomorrow to formally stake claim to form the government,” Singh told reporters after emerging from Raj Bhawan.

“We have submitted letters of support of the RJD, Congress, CPI and an independent MLA to the Raj Bhawan comprising total 130 MLAs in favour of Kumar, who was yesterday elected as JD(U)LP leader,” he said.

Though Nitish Kumar group was claiming majority, a section of MLAs of Lalu Prasad-led RJD disagreed with the decision and are rooting for Manjhi.

Singh said he would make the point at RJDLP meeting here today morning and claimed that at least 7-8 other RJD MLAs are of this view.
Meanwhile, the bitter fight within JD(U) saw an FIR being lodged during the day against a Manjhi loyalit minister Vinay Bihari for allegedly threatening a colleague from the rival camp, a charge denied by him.

An FIR has been lodged on the complaint of former minister Bima Bharti against Bihari and MLA Sumit Singh for threatening her with dire consequences if she did not support Manjhi, station house officer (SHO) of Sachivalya police station Amrendra Kumar Jha told PTI.

Sumit Singh is the son of Narendra Singh, who has emerged as the main advisor of Manjhi.

When contacted, Bihari, who is Minister for Art and Culture, rubbished Bharti’s charge.

The letter was sent to Raj Bhawan, the CMO and the office of Nitish Kumar.

It said that in view of the letter from JD(U) state President Basistha Narayan Singh apprising the decision of legislature party meeting last evening, the Speaker is according recognition to Nitish Kumar as JD(U)LP leader in place of Jitan Ram Manjhi, highly placed sources in the Assembly said

A letter submitted at Raj Bhawan on behalf of Sharad Yadav said that Manjhi was asked to resign from his post to clear the decks for Kumar’s election, but he refused to do so following which the JD(U) legislators elected Kumar as their legislature party leader yesterday.

The meeting was described as ‘unauthorised’ by Manjhi, who before leaving for Delhi last evening had urged the governor not to recognise it.