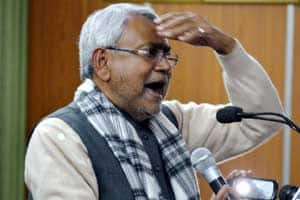 Nitish Kumar today escalated the stand- off in the ruling JD (U) in Bihar by threatening to take the battle to the President if his claim to form the government is not accepted while expelled Chief Minister Jitan Ram Manjhi sought a trial of strength by secret vote in the Assembly.
On yet another day of hectic

developments, the JD(U) expelled Manjhi from the party for “anti-party” activities and the Speaker declared him an unattached MLA.

Former Chief Minister Nitish Kumar, who has now been elected leader of the JD (U) legislature party, met Governor K N Tripathi and produced before him a list of 130 supporting MLAs in a House, with an effective strength of 233, belonging to JD(U), RJD, Congress, CPI and an independent.

After the meeting with the Governor, Kumar said he told Tripathi that he was ready to prove his majority in 24 hours or 48 hours, whatever the deadline the Governor may chose to give.

Flanked by RJD leader Lalu Prasad Yadav and JD(U) President Sharad Yadav, Kumar said they requested the Governor that a new government should be in place before the budget session of the Assembly starting from February 20.

Kumar said if an opportunity is denied to him to form government or in the event of any ‘dilly dallying’, he would parade 130 MLAs of JD(U), RJD, Congress, CPI and one independent before President Pranab Mukherjee in Delhi.

The three leaders described the meeting as “satisfactory”.

The Governor was also told that the 130 MLAs supporting Kumar were waiting outside Raj Bhawan wearing their I-cards issued by the assembly secretariat and if he wished he could meet them, Kumar said, adding, “on this, the Governor said ‘There is no need of it.”

Embattled Manjhi came calling on the Governor shortly later and told him that he can prove majority on the floor of the House whenever asked.

“I requested him that the floor test be held by secret ballot and one leader from each of the two (rival) groups of JD(U) be present during counting of votes,” Manjhi, who was accompanied by ministers Bhim Singh, Vinay Bihari, Nitish Mishra and Samrat Chaudhary, said.

He said Kumar’s election as the new JD(U)LP leader was “unconstitutional” as the meeting in which he was elected was “unauthorised” because it had been called by the party president instead of the Leader of the House.

On Kumar’s request that a decision on government be taken before February 20, the day the budget session of Bihar Assembly begins, Manjhi said he told the Governor “What’s the hurry ? … Where are we running away?”

“Whenever you direct us for floor test be it February 19, 20 or 23 we will prove our majority on the floor of the Assembly,” Manjhi said he told the governor.

Asked about the number of MLAs supporting him, Manjhi said “there are many but they do not want to come out in the open before the media because those people (Nitish Kumar group) have many ‘bahubalis’ (armed men).”

He quoted a colloquial phrase that “whenever somebody asks a barber how much hair is on one’s head, the barber says he will say when the person comes before him.”

Manjhi’s remarks came a day after he met Prime Minister Narendra Modi in Delhi and many BJP leaders which indicate that the party may support him in the trust vote.