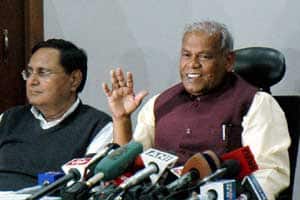 Bihar Chief Minister Jitan Ram Manjhi on Sunday pitched for “special category status” for Bihar, a demand long pushed by his mentor-turned-adversary Nitish Kumar, saying it will pave the way for economic development and employment generation in the backward state.

He said without the special status the high growth rate achieved by it would not be sustainable.

Addressing the maiden Governing Council of Niti Aayog, where Prime Minister Narendra Modi sought views of chief ministers on the budgetary allocation to states and various central projects, supported the creation of the new body in place of Planning Commission but also offered veiled criticism of the plan body’s reported function as a “think tank”.

He wondered whether the Niti Aayog will decide allocation of special resources and said, “Will special resources for backward states be made available by the Aayog. I have read in various media reports that it will be done by Finance Ministry. If it is true, then it would be retrograde step.”

He also said that the main concern was the allocation of resources to states.

Noting that “a new idea and vision is required in changing economic and social conditions”, Manjhi said he agreed that there should be a mechanism like Niti Aayog which enhanced “cooperative federalism” and provides a platform to the Centre and states for regular dialogue.

“If Bihar is given special category status, then its share in central scheme will go down and it could utilise its resources in more effective ways… It will lead to better economic conditions, more employment opportunities and improved living conditions.

“That is why people in Bihar have been seeking the status without which we cannot sustain high growth rate achieved in the last nine years,” he said.

Manjhi said he would not be able to speak in details about the national development agenda listed by the Aayog as he got the agenda on two days back but stresses that a final decision should be taken only after considering inputs from all states.

He listed poverty elimination as the most important criteria by which nation’s “success” should be measured.

Government should empower weaker sections, especially SCs and STs, so that they have a say in deciding on developmental or else “economic development will remain incomplete”.

Speaking about various new central schemes like ‘Swachh Bharat’, ‘Namami Gange’, ‘Beti Bachao Beti Padhao’, Manjhi said he had no ideological problems with them and in fact supported some, but there was a concern that a long list of such schemes would cut down on the allocation of money to schemes benefiting poor.

He also demanded that allocation of resources should be based on 2011 census not 1971, as the case now.